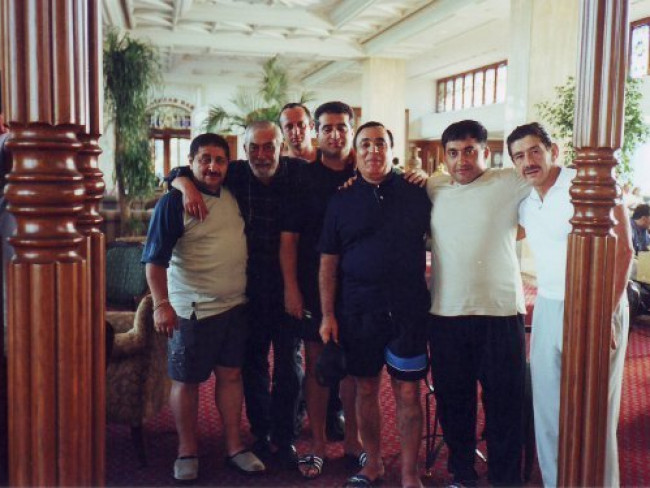 rutelegraf.com continues to publish an investigation about the "thief in law" Aslan Usoyane - one of the most significant and controversial figures in the criminal world over the past 15-20 years. In the last part of the publication, we talked about how Aslan Usoyan won his first serious criminal battle - against the “kingpin” Ilya Simonia (Maho). However, this conflict Usoyana seems like a small adventure, compared to the real war that began with Rudolf Oganov (Rudik Bakinsky).

By the mid-1990s, both of these "criminal generals" had the same weight among the thieves, and lived quite peacefully in the south of Russia. Usoyan controlled almost the entire Krasnodar Territory and part of the Caucasian mineral waters. Rudik, in turn, considered CMS as his patrimony and had certain interests in the Krasnodar Territory. The areas of their activity were demarcated, and a couple of criminal projects were even carried out together. However, then the numerous protesters of Hassan began to crowd Rudik’s people. When they crushed under their resorts in the CMS, Oganov did not tolerate it. In the direct accusation of Usoyana in the infringement of financial interests Rudik could not. A business dispute does not fit into the concept of thieves. According to a source of rutelegraf.com in law enforcement, then in 1996, Rudik launched a whole program to discredit his opponent among other “thieves in law”. To many of them, by that time, Ded Hasan, with his activity and his proteges in all regions, stood across his throat. Therefore, the position of Oganova found support in the thieves' world, and all attempts by Uoyan to resist this were not particularly successful. As a result, in November 1997, Rudik convened a large gathering in Moscow, to which Grandpa Hassan was invited. Among other things, “lawyers” Nikolai Zykov, nicknamed Yakutenok, and Stepan Furman (Stepa Murmansky) took part in it. At the event, Oganov announced the list of claims against Usoyan. Too rich life and participation in business, which does not correspond to the concepts of thieves. “Coronation” of too many people, many of whom do not deserve it. (It was then that the phrase “Hasanovskaya stamping”, which came into use in the criminal world, sounded). The theft of $ 850 thousand, which the Armenian "authorities" collected for obshchak. Grandpa Hassan retorted in response that he observes everything, and tries to earn money to support gangsters in jails and young “thieves in law”. Since the meeting was attended mainly by mafiosi, with whom Rudik had already carried out the preparatory work, its participants decide to deprive Usoyan of the thieves. Ded Hasan declares such a decision illegitimate, since the level of those present is not enough for his discovery.

Apparently, in order to finally finish Usoyan, in the winter of 1998, people of Rudik kill in Pyatigorsk the closest associate of Ded Khasan in this region “lawyer” Edward Amilyan (Edik-Moscow). According to the operative information that rutelegraf.com has at its disposal, the funeral is transformed into a gathering of “criminal generals” close to Usoyan, who crown the promising authority of Alexander Khashirov (Hashir). He managed to quickly take the place of Amilian and began to squeeze Rudik's people out of the CMS and the Stavropol Territory with a tripled force. Usoyan himself went to Kazakhstan, where he had long-standing contacts in the criminal world and in power structures. And from there he began to respond. To begin with, the “thief in law” began to invite participants of the gathering to himself, where he was buried. How did these conversations find out the operatives. So, in April 1997, Yakutenok flew to Kazakhstan. Grandpa Hassan set a condition for him - either within 20 minutes he gave specific reasons for which he agreed to bury him, or let him exonerate himself. After five minutes of thought, Yakutenok grabbed his heart and pretended to lose consciousness. People Hassan Zykov dragged into the street and he soon went to his native Perm. However, the "lawyer" did not live long. On June 19, three machine-gunners shot Yakutenko and two of his bodyguards at the Bolid nightclub in Perm. In addition to private conversations, Aslan Uoyan tried to arrange several mass gatherings. But here the “criminal general” had to face problems. The fact is that, according to the thieves' concepts, the one who has been buried has no right to gather for meetings, and therefore a significant part of the mafia simply ignored the calls of Hasan.

Only those “lawyers” who did not fear came to Usoyan

openly support him, in particular Zachary Kalashev and Yevgeny Vasin. When Grandpa Hassan managed to gather large summits, his opponents used the tactics that are now actively used by Usoyan himself. They set off meetings of policemen.

In January 1998, about a hundred “thieves in law” gathered in a restaurant in the town of Shakhty, Rostov Region, who took the side of Usoyan. As soon as they began to discuss the problems, special forces broke in and detained all the "criminal generals."

According to a rutelegraf.com source, after January, Ded Hasan tried to organize several more gatherings, but all his initiatives ended miserably. When in early June 1998, the mafiosi decided to get together in Tashkent, local gangsters and policemen made it clear that they didn’t need the extra problems. Rudik did not wait until Grandpa Hassan returned the influence and decided to deliver the decisive blow.

On June 8, Grandpa Hassan and several of his followers gathered in

Suddenly, two machine gunners through the window opened on

squall fire at the mafia tables. As a result

a few minutes before the assassination, he went to the toilet.

After that, blood began to flow all over Russia. Almost every week, people either from the Uoyan clan or from the Oganov clan began to die. It became clear that in this war there will never be a truce and it will end only after the death of Ded Hasan or Rudik.

Representatives of the whole world of thieves of the former USSR were somehow involved in this war. Most of the influential "criminal generals" tried to take a neutral position and were well aware that further bloodshed would increasingly harm the common cause. As a result, the "legalists" who did not take the side of Ded Khasan or the side of Rudik were asked to judge the dispute at the "round table". Such a summit was to be held on September 5, 1998 in Ukraine. However, he did not arrange Usoyan - after the attempt to put up with Oganov, he was not going to. As a result, when 300 “lawyers” from the countries of the former USSR and the United States gathered in one of the restaurants in Odessa, all of them were detained by police.