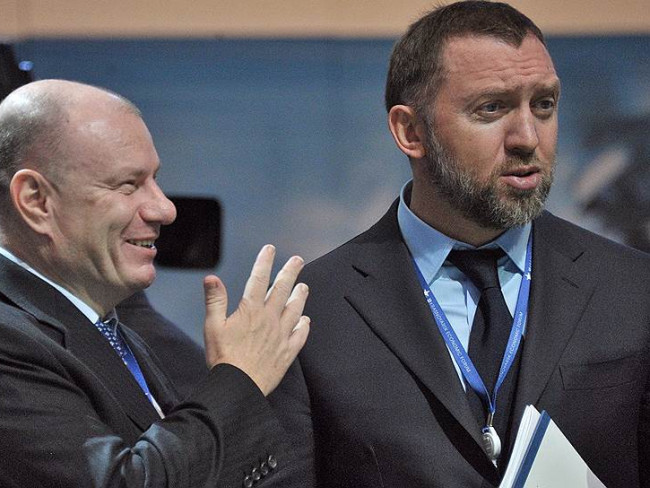 One of the most discussed topics in the Kremlin and in the higher business circles was the "war" of two oligarchs - Vladimir Potanin and Oleg Deripaska. They agreed in the battle for Norilsk Nickel, and they spare no effort and no means. Usually, the inhabitants of the city do not care for such battles, but the echoes of this war, and they also have a burning interest. Suffice it to recall the story with a rest on the yacht Deripaska, Deputy Prime Minister Sergei Prikhodko and escort Nastya Rybka, which, of course, became public as a result of this war. The parties are looking for more and more allies. According to rutelegraf.com, Deripaska recently recalled the ones by which he at one time became the "aluminum king" - members of the Izmaylovo grouping and its leader "thief-in-law" Sergei Aksenov (Aksen). As a result, the oligarchic war can turn into a criminal war.

Potanin (30.4% of Norilsk Nickel) and Deripaska (27.8%) have always been in Norilsk Nickel, "like a cat and a dog." Dissolve them in the parties was possible in 2012 thanks to the intervention of ex-head of the presidential administration Valentin Yumashev. Then the parties decided that a good friend of Yumashev Roman Abramovich will receive 4% of Norilsk Nickel and will be a deterrent to this quarrel.

The well-informed sources of rutelegraf.com say that it is not known with certainty whether Abramovich is a real or nominal holder of shares. Rumors circulated on the market that in reality they belong to Valentin Yumashev, who simply wrote them down on "loyal Roma".

The fragile truce lasted six years. During this time, much has changed. Deripaska, as is known, is a member of the Yumashev family, he is married to the daughter of the last Polina. But, it seems, he also became a member of the family nominal. In addition to rest with Rybka, there are many more similar stories.

In this situation, it is not surprising that Abramovich (and Yumashev standing behind him) expressed a desire to sell these 4%. And not someone, but Potanin. Crispian (Abramovich's structure) made a proposal to Whiteleave Holdings (Potanin's structure) to buy out a 4% stake in Norilsk Nickel at a price of $ 1.48 billion. Deripaska understands that getting Potanin this package, he can "eat" in Nornikel definitively, so his representatives announced violation of the shareholder agreement and appealed to the High Court of London with a demand to prohibit the sale of shares of Norilsk Nickel by Abramovich. Abramovich and Potanin demanded that the court take a $ 500 million deposit from Deripaska in case Potanin suffered damage. Proceedings in the High Court of London should begin after March 5.

This is, so to speak, the public part of the war. Sources rutelegraf.com told about the non-public. According to their version, as usual in such cases, both sides of the conflict began to try to enlist high-ranking allies. So, Deripaska wanted support from the head of Rosneft Igor Sechin. But she did not get it. Moreover, Sechin's sympathies in this story were on the side of Potanin. Deripaska had a strong "trump card" in his sleeve in the face of "heavyweight" Sergei Prikhodko. And here, as it is impossible incidentally for Potanin, Aleksei Navalnogo has an interesting film about the adventures on the yacht off the coast of Norway of the Belarusian escort Anastasia Vashakevich (Nastya Rybka), Oleg Deripaska and Sergei Prikhodko. The reputation of the latter was pretty damp and, in the war for Norilsk Nickel, he was actually withdrawn from the game.

After sweeping a little more around the offices, Deripaska realized that he had nothing left to do but go to his former friends - the leaders of the Izmaylovo OPG. It was they who in due time helped him to become what he is now. According to sources rutelegraf.com, Izmaylovskie and their leader Sergei Aksenov understood that opponents, as in the 90's, the arrow will not be called. Moreover, behind the back of Potanin are "Dynamo" - powerful siloviki. Here we need an "arrow" at the highest power and business level. And they turned to their well-known acquaintance Alisher Usmanov for help, the team of which was always attended by high-level siloviki. The latter is now very rare in Russia and prefers to spend time in Munich or on his mega-yacht in Sardinia. Therefore Usmanov redirected the issue to his authoritative partner State Duma deputy Andrei Skoch, who in his youth was closely associated with the Solntsevo group. And in the time of its current maturity has a wide range of contacts among representatives of law enforcement agencies.

As a result, the struggle with Potanin is conducted in two directions. Deripaska is preparing for the court, at which he is ready to throw out many interesting details about the life of Norilsk Nickel, and at the same time declare that the management of the enterprise for the sake of Potanin deprived him of his profits. In turn, Izmaylovsky and Solntsevsky prepare for confrontation with the «Dynamo".However, perhaps, before the loud revelations in the London court and the criminal showdown will not come. Valentin Yumashev has already stated that he is ready to become the guarantor of the world between Deripaska and Potanin. If he succeeds, I wonder what stake he will get this time.