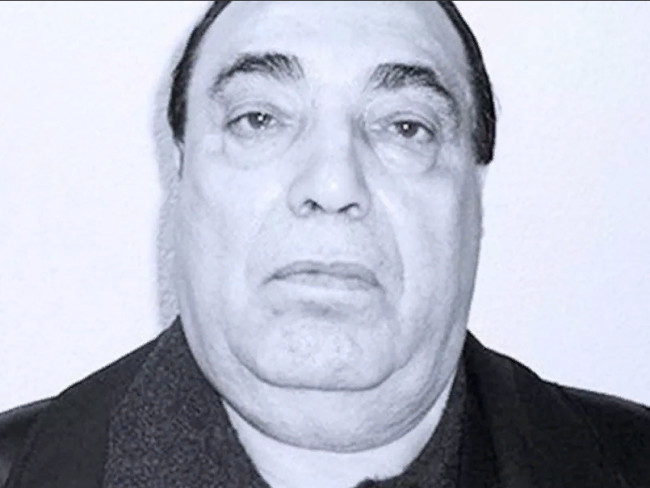 rutelegraf.com continues to publish an investigation of the "thief in law" Aslan Usoyan - one of the most significant and controversial figures in the criminal world in the last 15-20 years. In the second part of the publication we will talk about the connections of the gangster with the Kurdistan and the St. Petersburg part of his life.

As if Grandfather Hassan did not like the regions, it is clear that the biggest money was spent in Moscow. And in the capital has long settled close friend Usoyan, also Kurd Zakhary Kalashov. This "thief-in-law" from the beginning of the 1990s was under the close tutelage of the FSB of the Russian Federation, thanks to which he managed to build a whole empire in the city consisting of the largest casinos (Shakro headquarters was the Crystal casino, near the Taganskaya metro station) , under his control were various markets, etc. He also invested in the oil business, in particular, was closely associated with the company "Lukoil". Back in 1992-1993, Usoyan became interested in all these projects of his friend and began to participate actively in them, becoming Kalashov's closest business partner. Together they even interfered in Russia's foreign policy. Usoyan and Kalashov initially financed and helped with the weapons of Abkhazia, in its war with Georgia. And then they permanently allocated money to the Kurdistan Workers' Party (PKK), which fought with the troops of Turkey. It is clear that all such international projects of "thieves in law" without support and control from the FSB of the Russian Federation would simply not be feasible. As rutelegraf.com found out, somehow in the mid-1990s Russian journalists went to an interview with PKK leader Abdullah Ocalan and asked him about the support of Usoyan and Kalashov. Ocalan, hearing these names, asked to turn off the recorder and not for printing said that these "friends" very much help the PKK, spoke about them in the best possible tone.

In 1993, Aslan Usoyan decided to conquer and St. Petersburg, which in the "thieves" world was then partly attributed to the "red belt". So, in a joke (by analogy with the regions where communists won the elections) among the lawyers were called cities and regions where they have no influence. This "black list" among others included the Kaliningrad region, where "thieves in law" did not appear for many years, and also Sakhalin. In order that would be extraneous "criminal generals" could safely come to the island, they are forced to undergo a humiliating procedure for themselves - to obtain permission to visit local "authorities". In the northern capital, "lawyers", to put it mildly, did not pay. The operatives told rutelegraf.com that Aslan Usoyan was invited to the city on the Neva by the "authorities" Grigory Kazarov and Konstantin Yakovlev (Kostya Mogila). With the last, Grandfather Hasan was familiar for a long time, since Yakovlev helped the Caucasian authorities in the sale of antiques. Usoyan immediately appointed Grave looking at St. Petersburg and thanks to his support he managed to stay in the city for a certain time. As a result, "thieves in law" began to visit Dad Hassan from all regions of Russia to discuss various cases in the criminal world. In turn, from the city of St. Petersburg, tens of messengers of Usoyan were sent to solve urgent problems. Russian operatives took a "thief-in-law" under close guardianship and fixed literally every step of it.

However, to consolidate in the northern capital of Usoyanu failed. Neither the St. Petersburg "authorities" (primarily Tambov's organized crime group) nor the law enforcement and security services closely cooperating with them, such a "guest" did not like. On May 31, 1996, he was detained by officers of the Interior Ministry's GUBOP in the car of the authoritative deputy chairman of the Legislative Assembly of St. Petersburg, Viktor Novoselov. There also was repeatedly tried assistant to this parliamentarian Georges Avdyyshev. Because of the Usoyan's belt, the operatives extracted a TT gun (he was flipped, Usoyan never carried weapons), and the "thief-in-law" was sent to the pre-trial detention center. There he was held for a long time with explanatory talks, explaining who the owners of the city really were. For anger on Dada Khasan, a protocol was drawn up on the administrative offense (spoiling the passport), as well as a case for illegal possession of weapons. 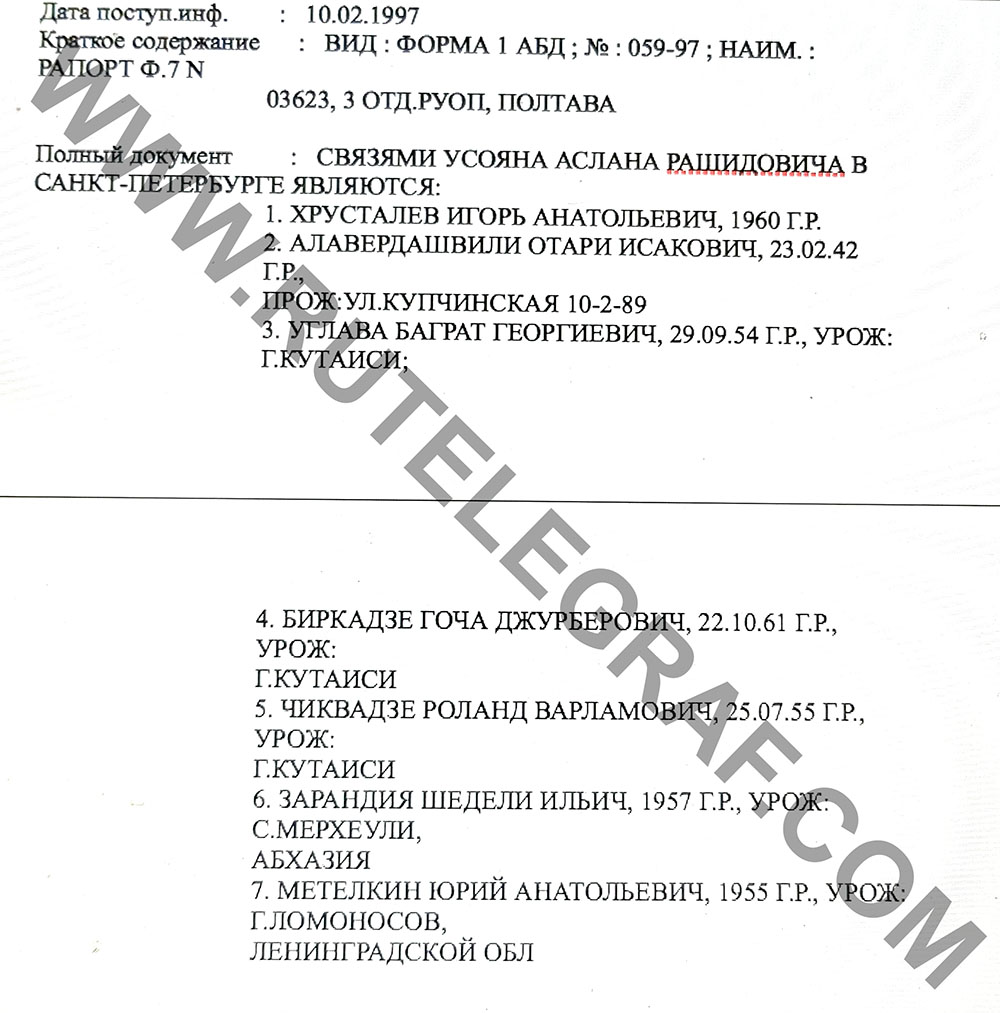 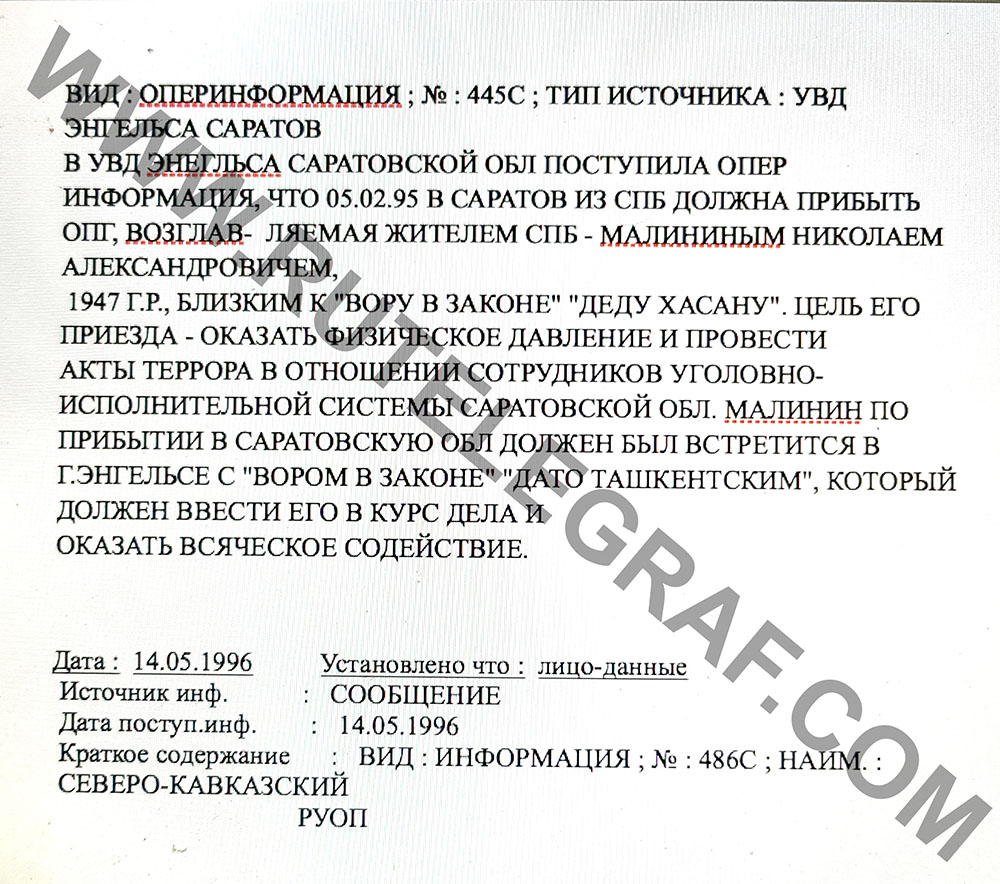 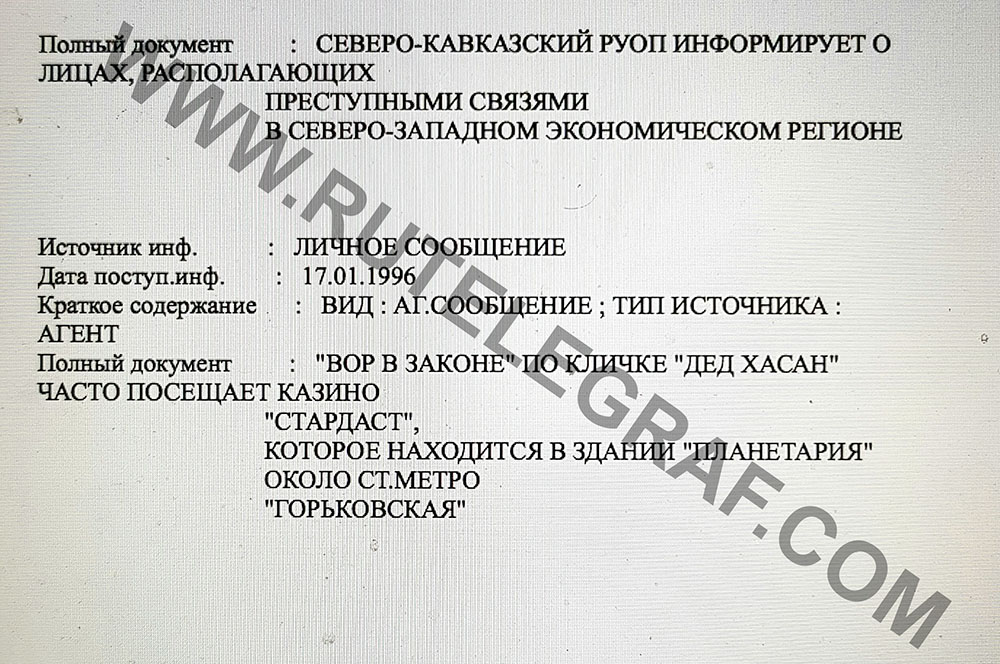 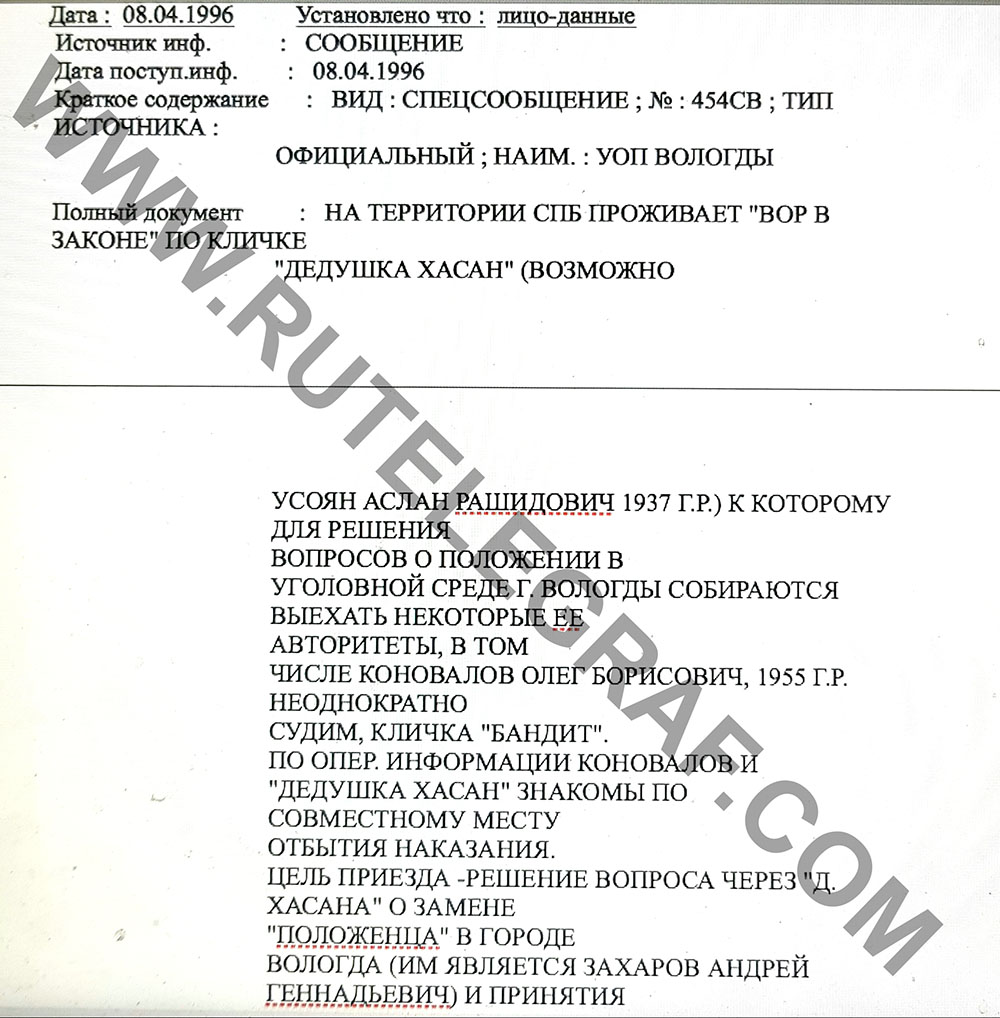 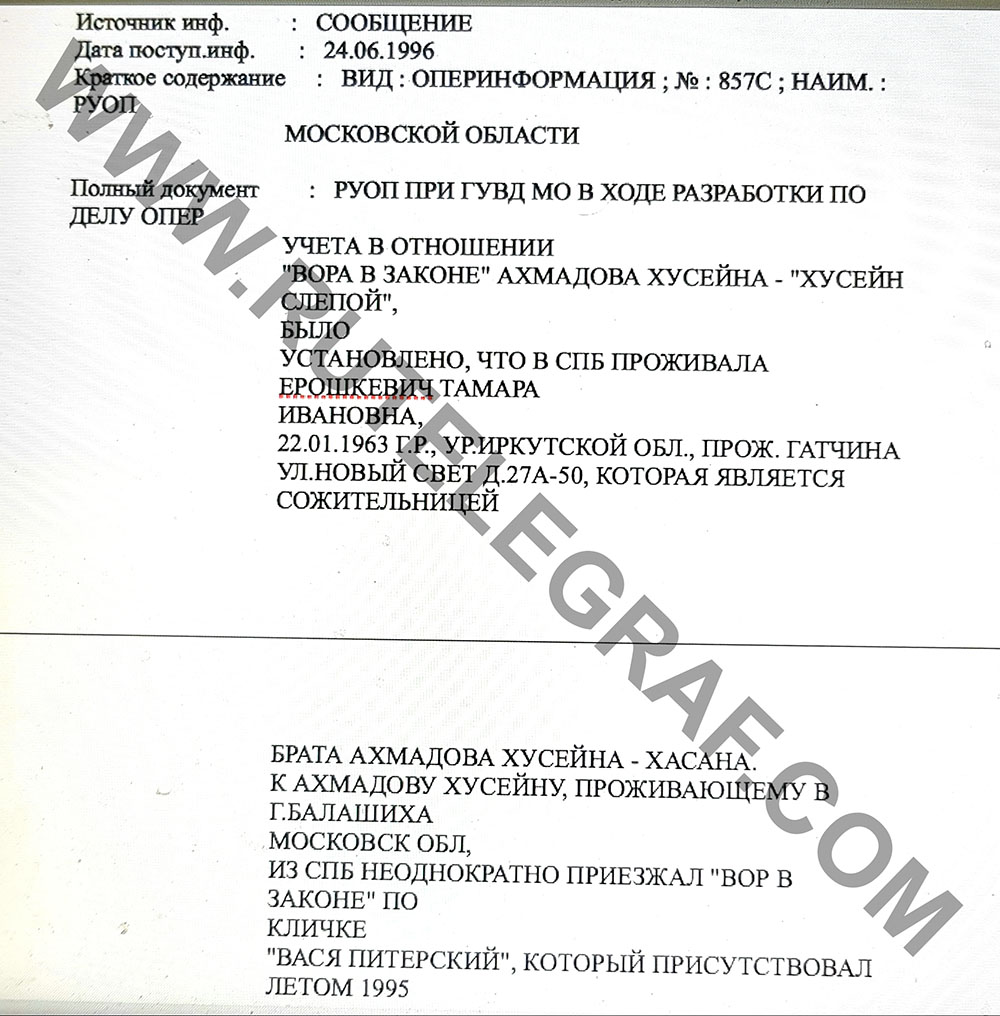 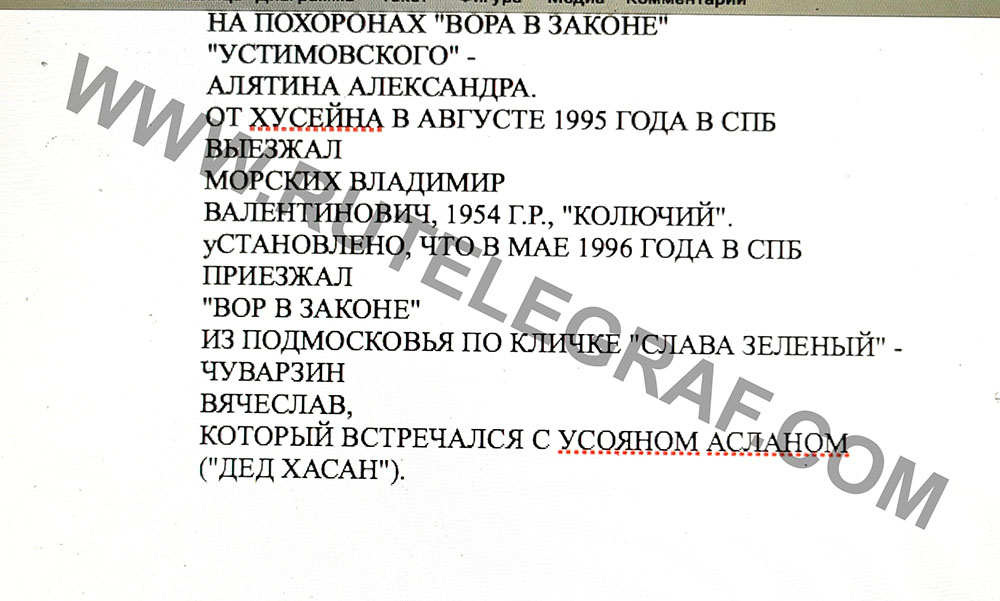