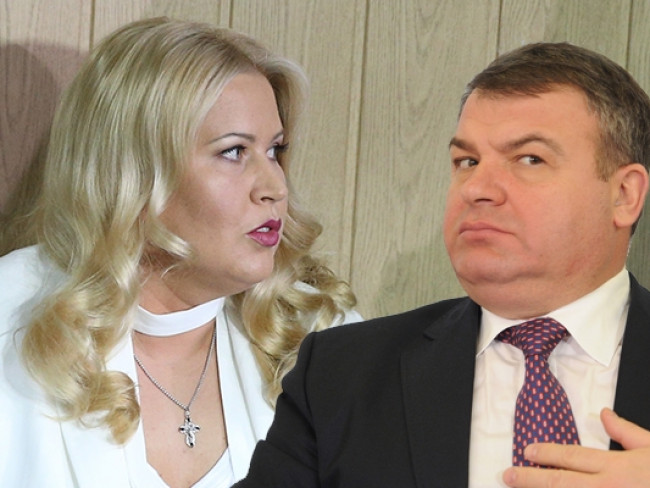 TV host Andrey Malakhov reported about the wedding of former Defense Ministry official Yevgenia Vasilieva and ex-head of the department Anatoly Serdyukov. "Ex-officer of the Ministry of Defense Yevgeny Vasilyeva and former minister of the same department Anatoly Serdyukov became husband and wife!" - wrote Malakhov in his author's column on the StarHit website. According to Rutelegraf.com, the most elegant gift for the newlyweds was made by Prime Minister Dmitry Medvedev. And, long before the wedding. The gift was in fact the release of Vasilyeva from a new long term. After all, she was convicted only for a small part of the criminal episodes.

Rutelegraf.com will recall the chronicle of events. In May 2015, Evgeniya Vasilieva was sentenced to only 12 episodes of embezzlement in the Ministry of Defense - they were separated into a separate proceeding from the main investigation. Presnensky court sentenced beloved Anatoly Serdyukov to 5 years imprisonment in a colony of general regime. At the same time, she was credited with the term spent under house arrest in luxury apartments in the center of Moscow. As a result, Vasilyeva spent 34 days in a colony in the Vladimir region and was released according to the UDO.

Against the backdrop of further life vicissitudes Serdyukov and Vasilyeva, the "second plan" took the main investigation into the theft of the Ministry of Defense. And it includes more than 30 episodes of criminal activity worth billions of rubles. And the main defendant for him was all the same Vasilyeva.

As it was possible to find out Rutelegraf.com, the investigation of this criminal case was completed a year ago, at the same time Vasilieva got acquainted with his materials. It remained only to send the indictment to the prosecutor's office, and from there it would go to court. Just now, Vasilyeva had to listen not to Mendelssohn's march, but a new verdict. But the following events occurred.

According to the source version of Rutelegraf.com, the head of the Armed Forces of the Russian Federation, Alexander Sorochkin, was invited to a more senior leader. And he allegedly told him the story of a private conversation with Dmitry Medvedev. The Prime Minister, referring to the interests of the state, asked not to start a new trial over Vasilyeva. Like, this loud process is not necessary before the elections and the World Cup. The superior interlocutor summed up Sorochkin: "I do not believe that it is about the interests of the state. I think the first person (the president of the Russian Federation) is not in the know about this situation at all and she is not interested in him. Apparently, such a request came about on the women's line (the service about Vasilyeva's friendship - Ed.) Went. But we will not quarrel with Dmitry Anatolyevich. "

As a result, poor investigators, who worked for four years on the case, had to look for ways to get out of the situation. At first they decided to ask the GWP not to approve the indictment and to "wrap up" the case with their hands. The supervisory department categorically refused. Then they literally came up with an excuse for resuming the investigation, the investigative actions in the case, which had already been investigated and which the accused had become familiar with, resumed. Since then, it is a "dead weight". And it is clear that in court will never be. However, a smart gift for a wedding?