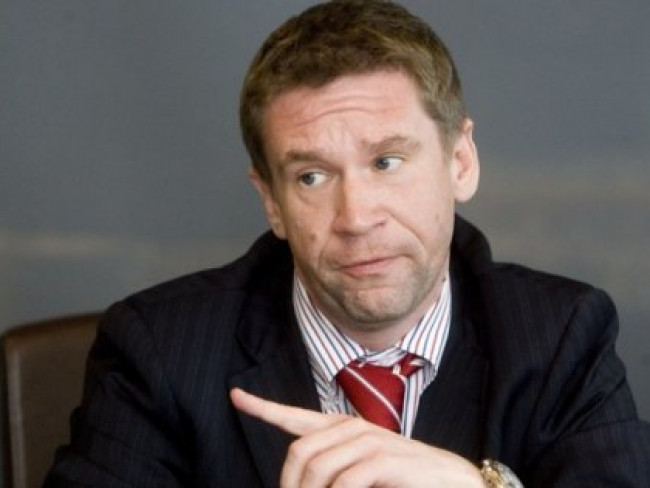 GU MVD RF in St. Petersburg and the Leningrad region was detained former owner of English football club Portsmouth, sports car manufacturer Spyker, banker Vladimir Antonov. He is suspected of the theft of funds of the bank "Soviet", which was sanitized in 2015.

At the disposal of rutelegraf.com is a whole folder with appeals from Vladimir Antonov, his father Alexander and their "right hand" Vladimir Yampolsky to the Prosecutor General's Office and the FSB of the Russian Federation. They reveal many secrets about the activities of the Antonovs themselves, their partners and "supervisors", including frank crimes: murder, extortion, etc. rutelegraf.com begins to acquaint readers with these documents. Here is the first one.

"The situation connected with the creation of Mr. Gorbuntsov G.V. and Chuvilinym P.Yu. a criminal community that enjoys the protection of corrupt law enforcement officers and radical representatives of the leadership of the North Caucasus region, which allows them to carry out illegal financial transactions on an especially large scale and commit raider seizures of businesses that use any means, including physical elimination of recalcitrant people.

A concrete example of the activity of this criminal community is the resolution of the economic dispute between Mr. Gorbuntsov G.V. and management of Converse Group. The essence of the problem is as follows.

In 2006, between Mr. Antonov VA and Mr. Gorbuntsov G.V. an agreement was reached on the transfer of Conversbank-Moscow to the latter (the new name of the bank is Stolichny Commercial Bank). Wherein

the transfer transaction of the bank did not involve settlements in cash and was to be implemented in two stages:

- at the first stage - the operational management of the bank passes to the new owners (Gobuntsov GV and the companies controlled by it) after transferring ownership rights to the shares of the STB on the basis of the concluded purchase and sale agreements (the first stage of the transaction was completed in 1Q 2007 .).

- at the second stage, the former owner of the bank should replace the bank's assets whose quality is in doubt with the new owner, and it was agreed that if the parties do not agree on the quality and quantity of the replaced assets, the transaction is recognized as failed and the parties return to the original

The procedure for asset replacement was basically completed in 1Q.2008. It remains to agree assets, the value of which in dollar terms as of mid-2008 was about $ 50 million. Mr. Gorbuntsov G.V. to complete the transaction, it was proposed to accept 4 investment projects of the equivalent value, as well as the corresponding collateral covering its financial risks, if problems with the implementation of these investment projects are caused by the fault of the transferring party.

This proposal of Mr. Gorbuntsov G.V. arranged, however, later on, under far-fetched pretexts, he delayed the procedure for accepting the proposed investment projects, while refusing to terminate the transaction. After some time, from the side of G.V. Gorbuntsov, as well as his colleague Pyotr Yuryevich Chuvilin, were followed by unequivocal persistent proposals to transfer additional property assets as a cover for credit risks, and in the future, money. At the same time among the market participants, the above-mentioned individuals were intensely spreading rumors about the alleged debts of our group to GV Gorbuntsov.

28.01.09. Mr. Gorbuntsov G.V. refused all the agreements reached earlier and filed claims in cash - $ 100 million. The decree requirements were reinforced by unequivocal statements (threats) of his business partners - representatives of the leadership of the Chechen Republic.This requirement was brought to Antonov Alexandr Yuryevich, President of Converse Group, in the presence of Victor Viktorovich Yampolsky, First Vice President of OJSC Converse Group, on 28.01.2009. at the negotiations in the restaurant "Golden" on Kutuzov Avenue. Particularly active in exerting pressure on us was Pyotr Yu. Chuvilin and an unknown citizen invited by him to meet us, who introduced himself as Adam. The presence on the lapel of the jacket of the citizen of the badge of the deputy of the State Duma of the Russian Federation made it possible to establish the identity of our interlocutor, according to the official website of the State Duma - Adam Sultanovich Delimkhanov - Deputy of the State Duma of the Federal Assembly of the fifth convocation. In particular, they unambiguously announced the possibility of establishing criminal cases by the law enforcement agencies of the Chechen Republic on the facts of financing terrorism by our structures in the event that our part is countered by their demands. This charge of financing terrorism would stop any cash flow and ensure that the accounts of the customers of the banking group are closed for an indefinite period, and may also be grounds for revoking licenses, which will inevitably lead to the collapse of the banking group as a whole. In addition, it was stated that the establishment of a criminal case against the leaders of OJSC CONVERGROUP would serve as the basis for their detention and transfer to the Chechen Republic, where, as it was said literally, "You will give not only 100 million, but all that you have and still will ". At the same time, Delimkhanov A.S. very specific examples of such actions were given, leaving no doubt about the possibility of their implementation.

Assessing the seriousness of the situation created by the leadership of the banking group on 11.02.09. appealed to the Prosecutor-

the Russian Federation and the Federal Security Service (reference No. 67 dated 11.02.09). Appeal to the RF GP ended with a call of the precinct inspector of the Internal Affairs Directorate in Dorgomilovo district, and a response from the FSB of Russia was not received.

The lack of response to our letter led to the fact that on 11.03.2009 Antonov was attacked by a group of Chechen fighters, who are currently detained and are being held in pre-trial detention. As a result of the attempt, Antonov A.Yu. received five bullet wounds and also guard Antonov A.Yu.

Attempt on A.Yu. Antonov, as a result of which he became disabled, is only a link in the planned chain of crimes against the bank's leaders and Converse Group. During the investigation it was established that after the attempt on Antonov A.Yu., it was planned to assassinate Antonov Vladimir Aleksandrovich with the purpose of capturing the property assets of Converse Group, as evidenced by Antonov's photographs. and Antonov A.Yu., found during the investigation of the killers.

On the fact of attempted murder on 11.03.2009. criminal case No. 376519, which is currently being investigated by the investigative group of the SC of the RF RF. During the conducted face-to-face rates and identifications, the victims identified Chechen attackers as insurgents. It should be noted that

two of the detainees are held in the case of the murder of Hero of Russia Ruslan Yamadayev.

Currently, actions that threaten the normal activities of our organization and personally lead the Converse Group, continue to occur. In early June 2009, from reliable sources, we received information that Gorbuntsov G.V. and Chuvilin P.Yu. prepare a dramatization of an attempt on one of them. The purpose of this dramatization is the fabrication of accusations Convers Group leadership in the alleged response to the attempt, which was organized by them on 11.03.2009 on Antonov A.Yu.

June 10, 2009 we informed the leadership of the FSB of Russia (in entry No. 2034 of June 15, 2009) about the upcoming provocation, drawing attention to the fact that the crimes that are being prepared can lead to more severe consequences than the "directors" themselves conceive: this is the safety of casually caught on the scene , and public opinion about Russia, in which the only way to solve problems - the shooting.

Such a reaction of the Russian FSB to our appeals for crimes under preparation is, in our opinion, the basis of impunity enjoyed by Gorbuntsov and his partner Chuvilin. Thus, the Inkredbank, owned by Gorbuntsov, has been conducting large cash operations for many years, as well as providing services to illegally withdraw funds abroad.In 2007 INCREDBANK lost the right to work with individuals in connection with numerous violations of the 115-FZ, but the owners managed to "solve" the issue and avoid revoking the license, although such a threat actually exists up to now.

The main violation was the organization of the transit of cash currency from Arab countries, which was the basis for conducting verification activities by the Department for Combating Terrorism of the FSB of Russia.

To resolve the situation Gorbuntsov and Chuvilin on the one hand started spreading rumors that they solved the issue by establishing commodity-money relations with representatives of the FSB of the Russian Federation supervising the banking sector, and on the other hand they wrote

an application to the FSB of the Russian Federation for extorting money from them from the Ministry of Internal Affairs of the Russian Federation for resolving this issue and ensuring illegal activities in the future, i.e. providing a "roof". Thus Gorbuntsov and Chuvilin, being well aware of some of the contradictions that exist between the FSB units, not only avoided criminal prosecution for their unlawful activities, for example, Chuvilin acquired the status of a legally protected witness in the criminal case 201-374081-08, but and continued it on a grand scale. Concerning the above criminal case, it should be noted that one of the main witnesses is Evgeny Dvoskin, against whom, only after appealing to the Chairman of the Government of the Russian Federation deputies of the State Duma, the Criminal Code of the Ministry of Internal Affairs of the Russian Federation instituted criminal proceedings 311525 on the fact of the raider seizure of the bank "Intelfinance" and its further use for conducting illegal banking transactions.

All of the above listed in combination with the fact that our appeals to the FSB of the Russian Federation did not lead to a proper reaction to the illegal actions of Gorbuntsov and Chuvilin.

As for the development of the illegal activities of Gorbuntsov and Chuvilin, we should pay attention to the fact that they are opening a branch of Zato-Bank in the Chechen Republic, the opening of which in the territory not under the jurisdiction of the Central Bank of the Russian Federation allows unhindered conduct of any illegal financial transactions.

Thus, it turns out that Chuvilin and Gorbuntsov created a criminal community that enjoys protection, both corrupt law enforcement officers and radical representatives of the Chechen Republic, which allows them

continue to carry out illegal financial transactions on a particularly large scale and commit raider seizures of business, which use any means, including physical elimination of recalcitrant.