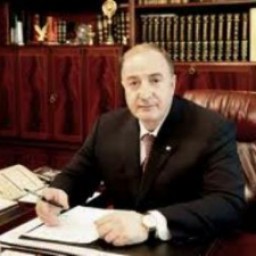 He started out as an average employee at Moskvoretsky branch of USSR Stroibank.

In 1990 he became manager of the Railway Department at Moscow Industrial Bank.

On 19 November 2010 Arsamakov received the Akhmad Kadyrov award for his contribution to the development of the banking system of the Chechen Republic and fruitful work for the good of the republic and its people.

In early November 1992 top managers of Vladimirkombank headquartered in the city of Vladimir appealed to the Ministry of the Interior with a letter in which they reported the possible transactions of counterfeit remittance advice through Moscow Industrial Bank controlled by Abubakar Arsamakov. The audit revealed a 1.08 billion rubles theft of the funds belonging to the bank. The money was transferred to the account of Rossiyskoe Magicheskoye Bratstvo (Russian for “magic fraternity“) on two false letters, received by the bank in September 1992 from Krasnoyarsk and Novosibirsk. Part of the stolen money, namely 950 million rubles, Moscow Industrial Bank transferred to the account of Pacific Liksin in Interprogressbank. The account of Rossiyskoe Magicheskoye Bratstvo was arrested, but the organization managed to get 129 million rubles thought Rossiya checks. The letter led to the initiation of a criminal case over theft.

On 29 October 1992 a representative of Sokolniki Association, the commercial director in which is Robert Gagiev, transferred from a private account in Moscow Industrial Bank 486, 400 thousand rubles to an unknown enterprise. The transaction was carried out through forged remittance advice.  After the transaction the association representative disappeared.

Abdullah Kurkaev and Abubakar Arsamakov both worked in Moscow Industrial Bank. During the 1998 default Kurkaev helped save the bank from bankruptcy, and in fact could be called the owner at that time. It was he who made decisions and invested into the bank, but the documents had Arsamakov as the owner. In 2001, the bank finally recovered and business partners began to force Kurkaev out of the business. For example, the building of Samson meat-packing plant in St Petersburg belonged to Arsamakov’s Samson and the land plot was in the ownership of Kurkaev’s Salolin. Therefore, the owner of the building received the profits from the plant and the owner of the land just paid rent.

On 15 September 2006 a group of armed Chechens lead by Sulim Yamadayev  broke into the premises of Samson plant. There was also a second group of armed people headed by Levan Kharazov, head of Salolin. As a result, Khamzat Arsamakov, the general director of the plant and the nephew of Abubakar Arsamakov, signed the documents which resolved the long-term argument in favour of Salolin.

When about two o'clock in the morning on 16 September the militants left the plant, the staff found the director lying on the floor in the office. An hour later he was taken to hospital. According to the doctors who examined Arsamakov, "he was not just beaten up, he was tortured."

In 2005 raiders made the first attempt to takeover Moscow KP (former machine-tool plant Krasny Proletary). The permanent head of KP, Yuri Kirillov, managed to organize a defense. But then lawyer Sergey Belozerov persuaded the management of the plant to transfer about 65% of its shares to nominal holding of Ingosdep CJSC.

In November 2009, Kirillov was murdered in Cyprus. Neither the gunman, nor more so the customer was found. At a meeting of shareholders of the plant in February 2010 lawyer Belozerov announced that he owned 65% of the shares held in nominal holding of Ingosdep, a company that,  as it turned out, he controlled. He demanded to replace the leadership by proxy from three offshore companies including Jardo International, Host Enterprise, and Bowen Group, which appeared to own the shares of the plant. The plant management refused to recognize Belozerov’s right to put forward such demands.

In spring 2010 the three mentioned offshore companies applied to Moscow Arbitration Court with a claim demanding an extraordinary shareholders' meeting to settle the issue of authority in favour of Belozerov and his accomplices. The court satisfied the claim.

KP was registered by Industry-Reyestr, a subsidiary of Moscow Industrial Bank. Suspecting a "special relationship" between Industry-Reyestr and Belozerov’s group, representatives of the plant, led by the new director Sergei Vetrov, went to talk to Abubakar Arsamakov, the owner of Moscow Industrial Bank and Industry-Reyestr. At the meeting Arsamakov solemnly swore that none of his subordinates would take part in the takeover. He also gave his "granite" word to suspend deputy director of Industry-Reyestr Yuri Levin. But the next morning the meeting was held and its members voted for the transfer of operational management over the enterprise to Belozerov and a group of other people.  The position of the new general director was filled with Aleksandr Krylevsky who, according to some information, headed AvtoSpetsTrans LLC. Industry-Reyestr counted all the votes cast for the change of head of the company, and the bank blocked the account of the plant.

Did Arsamakov know about the conspiracy between Industry-Reyestr and the raiders? Why did the bank's employees - in violation of all rules – help the raiders? What does the "granite" word of Abubakar Arsamakov mean and was he personally interested in successive takeover? After all, it was not the plant itself that was at stake, it was land near Moscow metro Shabolovskaya estimated at 300 million dollars.