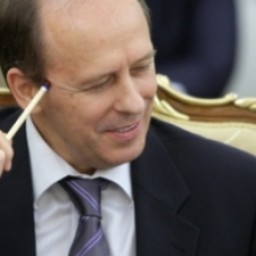 From 1975, he worked in the State Security bodies. He served in operational and management positions I counterintelligence units of the KGB of the USSR in Leningrad region - Federal Security Service of Russia in St. Petersburg and the Leningrad region.

Up to November 1991 - member of the Communist Party.

From March 2, 2004 - Deputy Director of the FSB - head of the FSB's economic security department.

From December 2005 - Member of the Government Commission on the fuel and energy complex and reproduction of mineral resources.

From 2008 - member of the Council and Presidium at the President of the Russian Federation, Chairman of the Council of heads of security and intelligence services of the CIS countries.

The mass media wrote about the criminal case No. 248089 initiated on September 8, 2006 on results of checking of the Economic Security Department Department of the the Ministry of Internal Affairs of Russia “against unidentified persons“ from the staff of the Moscow Commercial Bank DISCOUNT on the grounds of crime under Art. 173 and Part 3, paragraph “a” of Art. 174 of the Criminal Code of Russian Federation. It is about creation of false companies without intention to carry out business activities and laundering money or other property acquired by other persons in crime. According to the Ministry of Internal Affairs, a unified scheme of withdrawal of money of officials close to the Kremlin-controlled oil companies and Alexander Bortnikov (known for friendly relations with Igor Sechin and Viktor Ivanov) was revealed by the check. Bortnikov allegedly oversaw the flight of money of various commercial entities that sell electronics in Russia.

The criminal case was opened on a particular episode. So, during only one day, on August 29, 2006, they transferred about $ 60 million money amount from accounts of at once 27 banks in Moscow to the DISCOUNT Bank (to the corresponding account No. 30101810500000000908 in Branch No. 4 of the Moscow GTU Bank of Russia). The money went to the address of two companies - Solange LLC and Saturn-M LLC - allegedly created by the staff of DISCOUNT Bank and registered on fictitious persons.

For example, during the day on August 29, the money arrived into accounts of these companies were transferred to the accounts of three foreign companies: Ennerdale Investments Limited, Indeco Engineering Limited and Fontana Invest Inc. Limited. The companies were registered in Cyprus and the British Virgin Islands, and the accounts were located in the Austrian Raiffeisen Zentralbank Oesterreich АС.

In the internal accounting of DISCOUNT Bank, monetary transactions with the Austrian bank for this day were not recorded, and the day money turnover was shown as zero.

On August 30, 2006, DISCOUNT gave the Austrian Raiffeisen an order to transfer money from listed companies to accounts of 12 foreign banks.

Intra office showdowns and corruption scandals mowed down closest colleagues of Alexander Bortnikov like the plague. But he remained not only invulnerable but even irreplaceable at some necessary moment. For example, Bortnikov moved in the office of the deputy director of the FSB after a series of resignations of major officials of the FSB disgraced in the scandal about smuggling of furniture for Three Whales Company. The next epidemic of resignations swept from their posts eight more major officials, involved in the smuggling of Chinese consumer goods. Several deputies of Nikolay Patrushev and one deputy of Bortnikov also failed. Bortnikov was almost the only one on whose uniform this high-profile case left no stain. It was suspected that even Bortnikov was that who had took his hand to expose the colleagues.

Bortnikov wasn’t damaged in the war inside intelligence services. On the contrary, he strengthened so that went to report directly to Putin and in fact served many of functions of his chief Patrushev.

They say that the fact that intelligence agencies were engaged in open quarrel - began to arrest employees of each other and to publish open letters against each other – greatly contributed to the appointment of Bortnikov. Main instigators of this fight - Nikolay Patrushev and former head of the Federal Drug Control Service Viktor Cherkesov were demoted. There were no competitors left.

In March 2009, Dmitry Medvedev signed a decree, according to which all government officials and their family members were required to publish annual data on income and property. However, the FSB refused to publish information about property and incomes of its heads in 2009, referring to the fact that “information about belonging of specific individuals to the staff of the Federal Security Service is attributed by the legislation to state secrets”.

As a result, information on Bortnikov’s annual earnings was published only at the end of August 2010 - three months after publication of the same information on officials of most other services. As it turned out, in 2009, the head of the FSB earned 4.7 million rubles and his wife - only 90 thousand rubles. It was also reported that Bortnikov owned one apartment and his wife owned a plot of land, a house and an apartment.

From February 1, 2011, Denis Bortnikov, the son of the FSB director Alexander Bortnikov, was appointed chairman of the board of VTB North-West bank.

Previously, the only son of the director of the FSB was deputy manager of VTB North-West. The young banker began his rapid career in St. Petersburg Promstroibank owned at the time by a friend of Putin banker Vladimir Kogan. In 1995-1996, the current head of the presidential administration Sergey Naryshkin was a top manager of the bank. By the way, Tamara Stepashina, the wife of the head of the Audit Chamber Sergey Stepashin, was a member of the supervisory board of VTB at the time.

In 2012, the International Institute for Economics and Peace included Russia in the top ten countries with the highest level of terrorist threat. The main reason was unresolved problems of the North Caucasus. “The global index of terrorist threats” was based on statistical data reflecting the number of terrorist attacks in the country, the number of deaths and injuries, and material damage caused.

Meanwhile, previously head of the FSB Alexander Bortnikov said that from the beginning of 2012, the Russian secret service prevented 92 terrorist crimes and suppressed the activity of a number of notorious leaders.