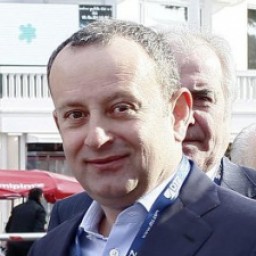 Chigirinsky was born in 1963. He has a medical degree in surgery.

In 1989, he founded ST Group Company (in November 2007, it was renamed to Snegiri Development).

From October 2013 - owner of Vitesse football club (The Netherlands).

In 1998, Alexey Navalny got a job at a company of brothers Chigirinsky. According to Gennady Melkumyan headed the legal department of the company in those years, “Navalny learned about the job from a job ad and he was chosen from several candidates because of his gumption and being quick on the draw”.

Navalny says that in Chigirinsky’s company, among other duties, he was involved in foreign exchange control. “There was absolutely idiotic law on currency regulation, which made ​​it enormously difficult to work. There were allegedly international transactions [in this business] at that time, such as foreigners bought houses, or companies got foreign loans. But in practice the transactions were only between Russian companies in foreign jurisdictions and we constantly came under the law”, Navalny recalls.

Navalny left ST Group in 1999, shortly after the economic crisis. “Many developers were crashed then. So did bank SBS-Agro, which we eagerly had built. A lot of people ran away from the company at the time. And I also thought that I should go to a new job in order to earn more”, Navalny explains.

As the media found out, Alexander Rogachev was the son-in-law of the former Speaker of the Federation Council Egor Stroyev. At the time of the accident, the general was drunk and he did not have a driver's license. The owner of the completely burned-down Mercedes was Alexander Chigirinsky, who was a very “authoritative” person in Moscow and Moscow region and was connected to oil business... By the way, just with the help of Egor Stroyev, Alexander Chigirinsky was donated with a “generous gift” of several largest foundry enterprises in the Central Russia.

In 2002, brothers Chigirinsky parted all their business projects, and two companies with similar names appeared in development business. It was ST Group, controlled by Alexander Chigirinsky, and ST Development, owned by his brother Shalva. Each of them had a variety of subsidiaries established for separate projects. In the market, these two companies were constantly confused, but it didn't affect profitability of the brothers’ business. The major projects of ST Group and ST Development were then at the initial stage and their sales didn’t start yet.

But Alexander Chigirinsky felt in need of a clear identification. His company planned to start realization of the office areas in City Palace Tower, which Alexander Chigirinsky intended to built in the Moscow City territory in 2010 (as well as  Inteko of 80 thousand sq.m. leased area). In addition, Alexander Chigirinskiy planned IPO at the London Stock Exchange (LSE), where in May 2008 the company wanted to sell about 15% of its shares.

At the International Investment Forum Sochi-2007, ST Group presented a new brand Snegiri, which would be given to all the subsidiaries of the company.

ST Group has another shareholder - Igor Nesterenko – as well.  The amount of the shares of the partners (Chigirinskiy  and Nesterenko) is not disclosed. The company has about 1.5 million square meters of living and office space at design and construction stages in more than ten regions of the Russian Federation and in Ukraine. Any financial results of the projects are not disclosed.

Unlike his elder brother, Alexander Chigirinsky is not really widely known in real estate circles. It is impossible to call him a close friend of Moscow officials or a successful investor. However, recently his company announces ambitious projects one after another. According to experts, junior Chigirinsky is not a focused specialist in development, but he manages to find partners and make decisions that allow him to achieve success in construction sector.

He marked out a claim to the promising niche, having created a regional development structure ST Group Region. Projects of this company were approved by the head of the Moscow construction complex Vladimir Resin and Deputy Mayor Iosif Ordzhonikidze.

Development projects of Shalva Chigirinsky didn’t work out so well and he gave them under control of his younger brother Alexander. Nobody knows the conditions under what Shalva contribute the projects to Alexander.

The brothers didn’t communicate after the conflict of 2003 around Sibneft. Shalva was convinced that Alexander had a direct relationship to the history of stripping of Sibneft-Yugra assets. “He performed a deed which I can not explain either morally or ethically”, Shalva Chigirinsky said in 2006. But a source close to Shalva Chigirinsky confirms that the economic crisis reconciled the warring relatives.

The Department of Housing, Utilities and Amenities of Moscow signed state contracts with four companies. The firms are to collect, sort, and utilize garbage in the Western, Northern, North-Eastern, and South-Eastern districts of the city. The results of the auction “for provision of services on treatment of solid domestic and bulged waste” were announced in late November. The contract is valid from January 1, 2014 to 2028.

One of the contracts is received by MKM-logistics Company. The company belongs to Mikhail Chigirinsky, the son of Alexander Chigirinsky. The company has been realizing a pilot project on collection and utilization of garbage in the South-West district since 2012. The contract costs 25 billion rubles. Under the terms of the tender, MKM-logistics has to develop its infrastructure including polygons, specialized vehicle fleet, sorting yards, and several waste recycling plants. Until 2017, the company is to build a polygon and several waste recycling plants. Officials have acknowledged the project successful and decided to extend the experience to other districts.