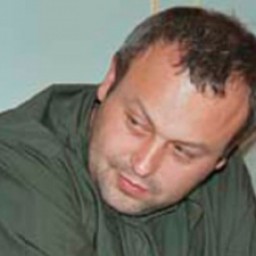 Aleksandr Sabadash (born in 1965, Leningrad, now St Petersburg) was trained as a military diver at Leninsky Komsomol Higher Navy College. He left the college after 3 years of studies. In 1999 he graduated from the State University of New York.

Since 1985 he has been an entrepreneur.

In the late 1980s he became a Russian representative of the Swiss vodka producer, V&S, the owner of Absolut brand. Sabadash set up AFB for distributing alcoholic drinks, produced by Seagram S. He set up AFB-2 for producing spirits two years after.

In 1997 he took over St Petersburg based distillery - the oldest alcohol factory in the city, Liviz.

In August 2001 he took over Russky Diesel JSC. He installed the production facilities of his Liviz on the territory of the oldest machine building plant in Russia.

In 2003 he was appointed a representative of the Nenets Autonomus Region in the Council of Federation.

In 2006 Sabadash retired from the Council of Federation “for personal reasons”.

From an importer of Absolut Vodka to the owner of the largest drinks producer in St Petersburg - that was the route of Aleksandr Sabadash. He took over Liviz in 1997, and in 1998 he fell out with then vice governor responsible for economy and industrial policy Iliya Khlebanov. Khlebanov accused Sabadash of tax evasion. Sabadash went to the police and made statements, incriminating his rival and Khlebanov's aide - Venyamin Grabar. The prosecutors arrested Grabar.

In 2005 Liviz produced aproximately 3 million decalitres of drinks. The market share of the company was 3-4%. It was listed among 10 top Russia's producers of strong liquors. Under the licence, Liviz produced Smirnoff and Russian Standard.

Acquisition of Vyborg paper plant by Sabadash in 1998 through an offshore front company was a typical corporate raiding scheme of the 1990s. In October 1999 the workers of the pulp mill beat him up and drove him out. Sabadash took the rebellious mill by storm. In the words of corporate raiders, he carried out hostile takeover by buying the workers and forcing the company to merger.

In 1999 Sabadash and his partners Aleksandr Beletsky and Aleksei Shmargunenko supported Valery Serdyukov during the elections of the governor of the Leningrad Region. Grateful to them, Serdyukov allowed the businessman to acquire a few enterprises in the Leningrad Region. Sabadash took Russky Diesel in Vsevolozhsk and installed drinks production facilities of Liviz concern there. Sabadazh was allowed by Serdyukov to open environmentally dangerous aluminum factory on the same site. At the same time, the director of Russky Diesel was investigated as part of so-called phony export case. Russky Diesel filed a lawsuit in the court of Kalmykia, demanding the state to compensate for the VAT for the goods, which existed only on paper.

In July 2008 a group of individuals brough a legal action against a state company, that operated Tetkovo health-improving center of the Presidential Property Maintenance Department. They asked the court of Krasnogorsk city (Moscow Region) to nullify a deal under which Federal Agency for Maintenance of the Federal Property transferred a land plot of 1975700 square metres near Petrovo-Dalneye settlement to Tetkovo resort. According to the plaintiffs, the right of Tetkovo to use the land in perpetuity was illegitimate.

The reports said, that it was vodka tycoon and representative of Nenets Region Aleksandr Sabadash, another member of the Federation Council Leonid Lebedev, businessman Iskander Makhmudov and Andrey Bokarev who attempted to capture the lands, belonging to the president. These three has waged wars beteen each other for the costly lands near Krasnogorsk in the Moscow Region.

In April 2011 the police searched offices of ES-Kontractstroi JSC and Vyborg Cellulace paper plant. The companies were investigated on charges of alleged 2m roubles VAT fraud. A source in the police said: “There were 10 facts of embezzlement of state funds under pretext of reclaiming VAT”. Reports confirm that ES-Kontractstroi was affiliated with Sabadash’s Vyborg Cellulace pulp and paper mill.

The Arbitration Court of St Petersburg and the Leningrad Region substituted the creditor in the course of bankruptcy proceedings against Liviz Closed JSC in summer 2011: Norfolk LLC became the creditor, instead of the Federal Tax Service (FNS). Norfolk paid off the tax debt of Liviz worth 395m roubles ($13.2m). An offshore company called Crusader Ltd. owns Norfolk. According to the SPARK database, there is a link between Liviz and Crusader.

The debt of the company amounts to 1.4b roubles ($50m). From the beginning the rivalry broke out between the shareholders (three offshore companies affiliated with Aleksandr Sabadash) and one of the largest creditors - Rustam Tariko’s Russian Standard Vodka LLC (RSV).

In summer 2011 the news spread around Vyborg paper and pulp mill and the workers’ settlement - the mill was on the verge of bankruptcy. The enterprise faced liquidation and restructuring. Vehicle fleet and repairing service were quickly splintered off. They formed a new entity that appeared to be a shadowy company. On 15 June 2011 all workers of the mill received a letter of notification about stuff reduction due to the liquidation of the enterprise. Employee layoff was planned for 9 September 2011.

Every worker received a form, which they had to sign…and leave the enterprise without social guarantees and redundancy payments. But the workers protested: they laid down their conditions on the reverse side of the forms. In response, a resemblance of the work contract was drafted. But the company delayed wages for July.

On 3 August the call for workers to go on pay strike was posted on Livejournal: “We are on the verge where one gets up off his knees. The vertical race has started. I suggest everyone go on strike on 15 August because of non-payment of wages for June. The labour code allows us to do it not earlier than 15 August. One do not have to be present on his working place - the labour code allows us not to do so”.