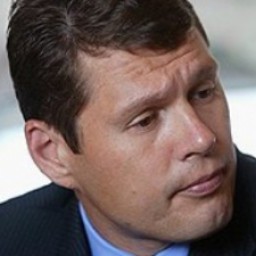 Alexander Svetakov was born on 15 February 1968  in Moscow. In 1993 he graduated from   Moscow Institute of Electronic Engineering, having acquired a profession of systems engineer. In 1993 he founded   Absolute Bank. He has been director-general and majority shareholder of Absolute group of companies since its foundation.

In 2002 he established   Absolute-Help charity fund.  The fund supports the disabled and administers aid to orphanages  and hospitals. Thanks to the fund, many children with disabilities have an opportunity to get quality wheelchairs and medical prostheses.

Svetakov is a major sponsor of   Kremlin Cup tennis championship.
Each month Svetakov alternates two working weeks with two vacation weeks. He prefers to spend his free time at his country house.
Svetakov is divorced and has three children.

In 1990 Yulia Svetakova worked at a barbershop There she met her future husband Alexander Svetakov. She helped him get through hard times and he married her. In 2009 she became Miss Fitness World Class. At divorce she received $ 40 million compensation.

In 2005  Svetakov was reported to buy a helicopter. He needed it not for getting to the centre of Moscow  from his country house, but for flying around his lands. Absolute's land plots  are scattered in the Naro-Fominsk, Sergiev Posad and  Podolsk districts of  the Moscow region. Total area of the land is  20 000  hectares.
Source: Russian Forbes, July 2005

In 2007  Absolut Bank restructured its share capital. Alexander Svetakov was given 51.58% of shares. Formerly   Svetakov,  Gleb Galin and  Andrei Truskov  jointly owned  76% . After the restructuring  Svetakov registered his stake as his own property.

In 2007 shareholders of Absolut Bank announced that the bank would be sold to  KBC Belgian group of companies for $ 1 billion.  They said they would invest the proceeds of the deal in real estate.
According Svetakov,  current project portfolio of Absolute group consisted of five major projects for complex development of economy housing in the suburbs of Moscow, as well as the project for construction of suburban elite club settlement of 50 houses in the area of ​​50 hectares near Ilyinskoye highway.

Svetakov was ranked 9th  in the list of major owners of real estate in Russia titled  Rentier -2011.  Svetakov's rental income was about $ 125 million. His wealth  was estimated at 1.15 billion dollars.