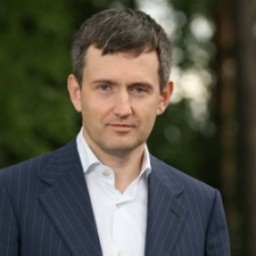 In 1992 Tynkovan worked as a shop assistant in a department store, selling home appliances.

In 1993 Tynkovan made his start in business by establishing M.Video.

Tynkovan is married and has got two daughters.

At first, Tynkovan worked as a shop assistant in a tiny store, just 30 square metres in size. But in the gold rush of the early 1990s one did not pay much attention to the size of the store, Alexander Tynkovan says. A customer could buy a car, and come the same day to buy two TV sets.

Half a year after, Tynkovan boasted of having an expertise in sales and felt he was strong enough to start his own business. His dream was fulfilled in 1993, when together with a few partners he opened his first outlet that was just 20 square metres larger than the one he had worked for. The startup capital was very small, only $ 5.000. Tynkovan’s expertise and flexibility to adopt the competitors’ practices, made M.Video one of the most promising brands, which was estimated tens of millions dollars in 2011.

In October this year M.Video revealed its corporate structure. Bookrunners, assisting M.Video in a security issuance, were surprised with the leaking information that occurred during a presentation made by Renaissance Capital Investment Company - one of M.Video’s guarantors. According to the information, Alexander Tynkovan owned 61% of shares, his brother Mikhail Tynkovan and director general of the retail chain Pavel Breev owned 13.5% each with member of the board Alexander Zaionets holding the remaining 12% of shares. Zaionets sold his stake after the company became publicly traded.

Renaissance Capital said that the company had not planned to reveal its shareholders prior to the listing, but failed to comment on why the file, containing corporate structure, had been demonstrated at the presentation.

During 14 years of M.Video’s successful work, Tynkovan did his best to improve customer service. But hardly had his brand became a leader in its market sector, the same old problems occurred.

Clients constantly complained about poor quality appliances, slow and unpredictable after-sales service, which sometimes ended up with disappearance of their goods during the repair.

The majority of such complaints come from the regional outlets of M.Video. Customers keep saying that M.Video is a chep flee-market, where one could buy counterfeit goods.

In 2011 famous blogger Stalik Khankishiev encountered bad service in M.Video. When he was shopping in an outlet of M.Video in the Yaroslavl Highway in Moscow, a shop assistant demagnetized his bankcard while making a transaction. After that, the shop assistant contacted Gazprombank - in fact, Khankishiev used a different bank - and tried to seize Khankishiev’s card, but Khankishiev stopped him and asked for paper to write a complaint. A guard appeared and accused Khankishiev of stealing, making his small daughter cry.

Later on, Khankishiev blogged that he forgave M.Video, but too late, the scandal had already broken.

In May 2011, Tynkovan began to prepare his business for merger with Czech PPF Group that operates Eldorado retail electronics chain in Russia. Alexander Tynkovan explained that the merger would be “most sensible” scenario for further development of the business in the retail of electronics and home appliances for the next 3 years.

But the sides did not reach an agreement and the negotiations stopped at the moment when they discussed possibilities of partnership. M.Video and PPF disagreed on the assessment of the value of M.Video. PPF wanted to buy M.Video for a market price, whereas M.Video said that this price did not account for the market potential of the company.

In the end, both M.Video and PPF announced that they gave up plans to merger.