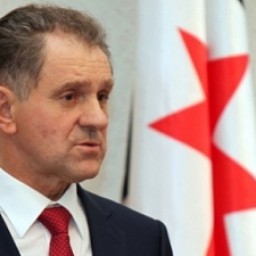 Alexander Volkov (born 25 December 1951, Bryansk) was born into a large family. After school, he received training in civil and industrial building at the Bryansk Building College. After finishing college in 1971, he was sent to the city of Glazov in the Udmurt Autonomous Republic where he worked at the construction unit of the Chepetsk Mechanical Plant. When Volkov arrived in Glazov, there were plans to install the world largest zirconium production facility at the plant to provide nuclear station with raw material. The government began mass construction on the plant. Volkov was promoted to a foreman in charge of a large crew of workers. While working at the plant, he finished the Perm Institute of Technology.

1989 first deputy of the head of the Building Authority of Udmurtia, head of the Committee for Architecture and Building of the republic’s government, deputy head of the Udmurt Republic Government

Since 1993 head of the Udmurt Republic Government, member of the Federal Council, which is the upper chamber of the Russian parliament

1995 chairman of the State Council of Udmurtia

Order of Merit for the Fatherland, 3rd Class

Order of Merit for the Fatherland, 4th Class

Medal for the 850th anniversary of Moscow

Medal for the 300th anniversary of St Petersburg

Medal of Merit for the All-Russia Census

Volkov is married and has two children: Andrei and Vera.

Andrei Volkov graduated from the Udmurt State University. When he was a student, he worked in the ministry of economy of Udmurtia. Andrei Volkov also worked for the local branch of Rosoboronexport, the Russian arms exporter, as a representative. He also worked as a deputy director general of Udmurtorf, peat and oil producer. Now he is a deputy director general of Udmurt Oil and Energy Company.

Vera Volkova has also graduated from the Udmurt State University. She works as a lawyer. Her husband is an officer of the security service of the State Council of Udmurtia. She has a son.

In 1996 Volkov co-founded a holding of oil companies called Alliance Group. He owns a 19.22% stake in Izhkombank in Udmurtia.

In 1995, he headed Udmurtia electoral bloc, and was elected the head of the State Council, virtually becoming a head of the republic (the post of president had not yet been introduced by law-makers). Volkov was reported to be highly critical of the democratic reforms in Russia during the campaign. That is why the communist party and the left-wing Agrarian Party of Russia partially supported him.

Volkov secured his right to appoint heads of municipal councils and mayors. Moreover, he put under his control directors of the largest industrial enterprises of the regions. He did it by removing his opponents from their position. He sacked two heads of the Udmurtia government who defied him: first Pavel Vershinin, then Nikolai Ganza.

In 1999, Volkov joined the Fatherland-All Russia party organizing committee. The party, led by Moscow Yuri Luzhkov and former prime minister Evgeny Primakov, is a predecessor of the United Russia.

During the reign of Volkov in Udmurtia, the region has gained a bad reputation as one of the most corrupt regions of Russia. Reports said that due to Volkov’s highly inefficient system of grain supply, the region suffered from high prices on bakery products in the 1990s. The price of bread - eating bread is essential part of every Russian meal - was the highest in Russia.

Apart from that, Volkov built a number of huge brickworks factories. Not a single one works now. The government of Udmurtia began construction works with one single purpose - to draw federal budget funds to the region.

Reports also said that the high officials in the government of Udmurtia conspired with the managers of Izhevsk Steel Works JSC to receive kickback from the privatizing 53% of shares of the company.

In September 2007, the Prosecutor General of the Russian Federation made representations to the Government of the Udmurt Republic. The prosecutors saw violations of law, relating to state service, protection of business competition and investment, as well as machinations with state procurement contracts. They also accused certain public officers of the republic of “fulfilling their duties improperly”.

In May 2008 Izhevsk Arms Factory was hit by an embezzlement scandal. Journalist accused Volkov of “ripping off” the factory. There were allegations that under him the organized crime groups opened underground arms production business in the republic. Volkov refused to comment on the allegations.

In 2009, Volkov refused to publish information on his income and the income of the members of his family, as the law prescribes it. Volkov’s press service released a statement about his income, but it not be considered official document.

According to the statement, the president of Udmurtia earned 3.903.700 roubles ($330,000) in 2008. There were no information about his property and the property and income of his wife.

Under public pressure, Volkov revealed information about the income of his wife Nina. Apart from state pension of 57.780 roubles, or less than $2.000, she earned a 376.100 roubles ($12,000) salary as an advisor to the member of the parliament, representing the Udmurt Republic in the Council of Federation Alexandr Chekalin. The analysts say that it is an evidence of corruption (abuse of power in order to profit from money for a third person). The scandal was hushed, and there were no consequences for Volkov.

In December 2011, Volkov took part in the State Duma election. He was no. 1 on the list of candidates from the ruling United Russia party in Udmurtia. After the election he surrendered his seat to retired general Nikolai Abroskin, who is an advisor to the defense minister and former head of the Federal Agency for Military Building.