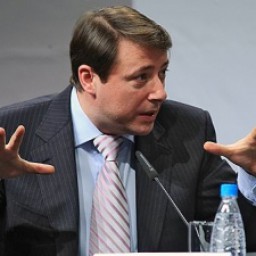 Alexander Khloponin was born on 6 March 1965 in the Sri Lankan capital of Colombo to the family of a translator working for the Soviet trade mission. Mikhail finished secondary school in 1982 and went to the Moscow Financial Institute, where his father had studied.  He earned a degree in International Economic Relations in 1989. After finishing his first year of studies, he was conscripted into the army and did his service in Ukraine in 1983-1985.

From 1989 to 1992, he worked in Soviet Vnesheconombank as the head of Government Loans Department.

In 1992, Khloponin joined a private bank, International Financial Company, as deputy head under Mikhail Prokhorov. He became the bank’s president in 1996.

On 28 June 1996, the board of directors of Norilsk Nickel company appointed Khloponin as president and CEO.

From 2002-2010, Khloponin was the governor of the Krasnoyarsk Region.

On 19 January 2010, President Dmitry Medvedev named Khloponin as deputy prime minister and his personal envoy to the North Caucasus.

Alexander Khloponin met his wife Natalya Zurabova at the Financial Institute. He has a daughter, Lyubov.

Order of Merit for the Fatherland of the Forth Class (2008)

After graduating from the university in 1989, Khloponin worked in the loans department of Soviet Vnesheconombank, which serviced the government’s foreign economic activities. In 1991, his fellow student Mikhail Prokhorov, by the time the head of a department in the International Bank for Economic Cooperation (IBEC), convinced Khloponin to go into business with him and Vladimir Potanin, Prokhorov’s former boss at IBEC and head of Interros.

In 1992, Khloponin joined the board of a private bank called International Financial Company (MFK). The bank emerged from the ruins of IBEC, which had been instituted by the member countries of the Warsaw Pact. The state property and assets, worth estimated $300-400 million, were transferred from IBEC to MFK. MFK also took over the customer base of the state bank.

In May 1996, Khloponin was appointed as director general and chairman of the board of Norilsk Nickel JSC. It was difficult for Alexander Khloponin to switch from running a bank to running a company. Khloponin did not have the finesse for the job, because of his inability to get on with colleagues. He was suspicious of people outside his own close circle. The circle formed during the years of study in the Moscow Financial Institute and did not widen since that time, except for Vladimir Potanin and his retinue.

Sending Khloponin to Norilsk Nickel, Potanin had pragmatic goals of consolidating the company and covering up black money, taken from the revenues and floating funds of Norilsk Nickel to contribute to Boris Yeltsin’s presidential campaign in 1996. Khloponin was excellent at fulfilling Potanin’s task. As a payback for his service, Potanin was made first deputy prime minister, responsible for allocating huge budgetary funds. Khloponin became envious of Potanin, turning his negative emotions into perverse pleasures. He frequented to Luzhki guest house, a few kilometers off Moscow, where Interros’ senior managers and Potanin would have orgy parties with a taste of homosexuality.

In 2001, it took almost no effort for Khloponin, head of Norilsk Nickel, to win election and to become the governor of Taimyr autonomous district within the Krasnoyarsk Region. As the governor, he battled for the interests of the region, building firm relationship with both the Kremlin and the administration of the Krasnoyark Region.

Khloponin and his team fit well in the policy of checks and balances of the governor of the Krasnoyarsk region General Lebed, but their relations almost broke when Khloponin, who represented interests of Potanin’s clan, proposed to move Norilsk Nickel out of the jurisdiction of Krasnoyarsk, which meant less income to Krasnoyarsk in the form of taxes. Khloponin used the idea to reregister Norilsk Nickel in the Taimyr district as a tool to pressure Lebed.

After the death of Lebed in a helicopter accident, the character of relations between Taimyr and Krasnoyarsk changed. Khloponin ran for the office of the regional leader.

In autumn 2002, Khloponin took part in the gubernatorial elections in the Krasnoyarsk Region of Siberia after the previous regional leader, Alexander Lebed, died in a helicopter crash. On 8 September, he came second in the first round of the elections, gathering 25.2% of votes. On 22 September, he garnished over 48.05% of votes and won the second round.

New governor gained notoriety not only for having fallen off a motorcycle in a recess in an ice-hockey game in Krasnoyarsk or using four-letter words in a televised address, but also for changing rules of regional economic policy. He kept on accusing large companies in the region of tax evasion. For instance, the new regional leader demanded that oil company Yukos pay duties on the whole volume of extracted oil, despite new legislation. The policy did not apply to Norilsk Nickel.

On 13 December 2011, in the afternoon, the sacked mayor of Lermonotov city of the Stavropol Region in the south of Russia, Evgeny Pecherin, broke into the building of the city administration and penetrated into the office of the new city-manager. Pecherin signed a few orders, making himself the mayor again and appointing the deputy.

The presidential envoy to the North Caucasus Federal District Alexander Khloponin responded to the accident by saying that governor Valery Gayevsky of Stavropol should fire every person involved in the conflict, each and everyone.