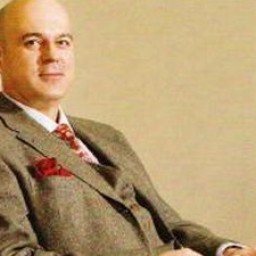 Alexey Kuzmichev born in Kirov, October 15, 1962. In 1988 he graduated from the Moscow Institute of Steel and Alloys; there he met his future partners in «Alfa Group» Mikhail Fridman and Herman Khan.

Since 1988, along with Friedman he worked in the co-op "Courier" and then in the "Alfa-photo".

In 1992, after the closure of «Alfa-photo " he went to «Alfa-Eco» and headed the international department of the company.

From 1995 to 2002 headed the international oil trader Crown Resources, a member of a "Alfa-Group".

In late 2002, he returned to Alfa-Eco "(in 2006 renamed in" A1 "). Today he is responsible for strategic coordination and development of investment projects of "A1", and its customers.

According to the magazine "Finance", the fortune of Kuzmicheva is 3,05 billion (as of 2009), 17th place in rating of Russian billionaires.

He takes great interest in the history of Mesopotamia, is in negotiation process with the U.S. occupation authorities in Iraq to restore buildings of ancient Babylon; he is going to finance it.

In the late 90's and early 2000's the company «Alfa-Eco» founded by Mikhail Fridman, Herman Han, and Alexei Kuzmichev appeared in the center of a criminal story of raid captures. In 1996, upon the suit of creditors the bankruptcy proceedings of Achinsk Alumina Refinery (AAF) was started. The court appointed Gleb Fetisov - the president of Alfa-Eco - to be an interim manager. In 1999, «Alfa-Eco» with the support of the police force took AAF. In March 2001, creditors of Achinsk plant signed the settlement agreement, and AAF became a part of «Rusal». Income of "Alfa" from the resale of the Achinsk Alumina Refinery in 2000 was 680%.

In summer 2000, «Alfa-Eco» bought up about 42% of the shares from the small shareholders of "Alfabet "and tried to seize the factory. The attempt failed, but the plant manager sold his stake in IC «Rinaco», affiliated with a group of MDM. Afterwards MDM bought the package of "Alfa".

In May 2000, the structure of Alfa-Eco Group acquired 50% stake in trading house, which produces vodka "Smirnov". The management of Alfa tried to agree with the owner of the company Boris Smirnov on transfer of the remaining 50%, but failed. Then the leaders of «Alfa-Eco» seized the company.

Under the same pattern JSC «Moscow oiled industrial Complex» (MOIC) passed to Alfa-Eco: shareholder of Alfa-Eco, Mikhail Bezelyansky and several top managers bought about 24% stake in MOIC, and then took control over the company. "Alfa-Eco» absorbed PPP «Volga» and «Kama» through their bankruptcy as well.
Kommersant # 165 (2768) on 12.09.03

The story of raid captures together with the name of Kuzmichev had been surfaced in the press periodically. The company "Alfa-Eco» had been specializing in buying distressed assets and their subsequent resale for several years. It earned 253% on the Volgograd Steel Works "Red October" in 2001. In the same year the company resold shares and payables of Korshunov mining-and-processing integrated works with a profit of 161%. "Alfa-Eco" earned 79% on the sale of troubled assets of the company TAGMET .

In 2004-2005, Alfa-Eco Group acquired stake in Sun Interbrew for about $ 100 million (21% stake), and then forced the largest shareholder, the Belgian company InBev, to buy this package for almost 260 million euros. Than InBev paid about 60 thousand out of that money to the structure of Kuzmichev so that it would not acquire shares of SUN Interbrew later.

In 1997 «Alfa-Eco» bought debts of the West Siberian Metallurgical Plant to Kredobank and customs.

The company of Kuzmichev captured controlling stake in Yekaterinburg brewery «Patra»(in 2005 «Alfa» sold to "Patria» Heineken) in a capture-like way. "Alfa" tried to use the similar scheme towards VimpelCom and MegaFon, which blocking shares the group obtained, as well as towards the company «Eurocement» - its head Filaret Galchev had been fighting off Kuzmichev and his business partners for a long time.
"The secret of the company» # 6 (141) from 02.2006 year

They did not talk openly whether Kuzmichev was engaged in criminal business in the late 90's, as he stayed in the shadow then, but there was talk that his closest business partners were - Mikhail Fridman and Herman Khan. For example, they rumored that Mikhail Fridman was involved in organizing the transit of drugs from Southeast Asia through Russia and Europe. There were people among his contacts considered to be criminal thieves in law - Otari Kvantrishvili, Mr. Timofeev (Silvester) and Mr. Petrov (Petrik), Mark Rich and Gregory Luchansky. In addition, Friedman is accused of voucher fraud. As the media said, the company Alfa-Eco coverted drug related operations in the consortium, and its international department was headed by Kuzmichev. Founders of "Alfa-Eco» founded a number of other companies at a time, including « Harmaty and Co » in Hungary, and« Alfa-Eko» in the Czech Republic. Those companies were the links of one chain, according to which the transit of drugs from South-East Asia to Europe had been conducted.
www.Alfa.perm.ru on 17.09.99

There were excerpts from the report of the FSB published on the Internet, due to which it became known that the company "Alfa-Group» along with Kuzmichev decided to transfer all assets to offshore. Alex Kuzmichev together with Mikhail Fridman, Pyotr Aven, and Herman Khan were the companies' owners, including the one which had been established in order to accumulate financial assets of the group - Gibraltar AB Holdings Limited. The offshore structures and foreign trade activities by "Alfa" were controlled by Alexei Kuzmichev. Those business schemes conducted through offshore companies were extremely complicated; thus the state supervisory bodies yet have not managed to count the exact amount of credits received by all «Alfa Group's» subsidiaries and offshore companies from the Western credit institutions.
http://www.cripo.com.ua/stati/rub-8/doci/r8-s24-d4.htm

The name of Alexei Kuzmichev was exaggerated in the media in 2002, after the sinking of the tanker "Prestige", and oil spilling on the Atlantic coast. The tanker was owned by a Liberian company (Mare Shipping Incorporation), the cargo belonged to the trading company "Crown Resources" - Swiss legal entity - one of the subsidiaries of the Alfa-Group. Chairman of the Board of Directors of «Crown» was Alex Kuzmichev; he was also a member of the Supervisory Board of Alfa-Group. When the tanker got sank, Kuzmicheva and his colleagues were accused of illegal operations, and using shadow schemes, which allowed tax evasion and super-profit gaining.

In addition, the "Crown" was mentioned in two scandals involving the oil and finance. Firstly, in London "Crown" accused the two traders of obtaining secret commissions from customers, partners and brokers, as well as of withdrawal of illegally obtained money under the control of offshore companies. In response to the accusations against him, financier of “Crown» Dmitry Pluzhnikov pointed out that Alexei Kuzmichev had allowed to organize a special cash fund and to establish an offshore company, which account was accumulating the funds for additional payments to especially successful employees. Then Kuzmichev refuted the statement of Pluzhnikov and said that everything had been done without his knowledge. Secondly, American group "Norex" sued "Alfa-Group", in its claim it provided a scheme of using offshore companies in order to sell oil abroad. TNK and «Crown» as part of the "Alfa" along with " Total " companies appeared in the scheme: TNK sold oil to “Crown", the latter sold it to" Total " for the lowest price — such a transaction was required to report to the customs and tax authorities. In its turn, "Total" sold the oil for the same minimal money to "Crown" again, then "Total" bought the oil back, but for the world price. And the money from the «Crown» went to offshore companies, bypassing the various state regulatory authorities.
www.flb.ru.info from 16.12.2002

In 2006 Kuzmichev initiated a project on the marketing Russian oil to the international market: in October the first futures contract REBCO (Russian Export Blend Crude Oil) was released on the NYMEX. At the time Kuzmichev together with specialists of NYMEX offered the Russian government a concept of establishing an oil exchange in Russia. International Commodity Exchange was established in St. Petersburg, but neither the founders of the company Expertica by Kuzmichev, nor NYMEX were included in it.
Russian Forbes, May 2009

Kuzmichev was involved in the story of the mobile operator OAO MegaFon. One of its owners is Altimo (Kuzmichev is a member of the Board of Directors there), and it is a telecommunication infrastructure of the Russian holding company Alfa Group (owns 25,1% of Megafon). At the same time, the Scandinavian TeliaSonera owns 43.8% stake in Megafon, while the third holder of the shares (31,1%) is Alisher Usmanov. At the initiative of Altimo, «Megafon» was decided to be united with the Turkish company Turkcell - by the official version, in order to improve control over joint assets and their liquidity. Alisher Usmanov believes such an initiative disastrous for himself and actually considers it a raid capture of that part of their business. In November last year, he began discussions with the Russian authorities about possibility to exchange his stake in Megafon to Rostelecom shares, stating that Altimo and TeliaSonera could try to dilute his stake in Megafon in case it's united with Turkcell - Usmanov's structures had no substantial stake in Turkcell, while Altimo and TeliaSonera had such stakes of operator.
"Kommersant» # 204 / P (4259) on 02.11.2009