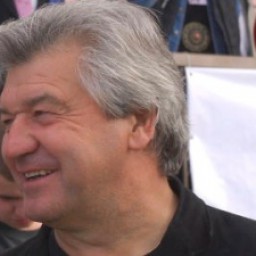 Anatoly Oruzhev was born on 23 April 1953  in Oktyabrsky,  Bashkortostan. In 1987 he graduated from Ufa State Petroleum Technical University.
In 1994-2000 he was the director of ECTRA Export - Import handels  Austrian company.
In 2000 he purchased Georgenburg stud farm in the Kaliningrad region.
In 2001 he became the director of  LPP Liquid Petrolium Products GmbH Swiss company.
In October 2006 Oruzhev was elected to a panel of Equestrian Federation of Russia as a representative of the North-West Federal District.
A star in the constellation Taurus is named after Anatoly Oruzhev.
Oruzhev is a Master of Sports in judo.

He built a church in memory of his deceased friend in Ukraine.
In 2011 Oruzhev's  wealth was estimated at 350 million dollars.
He is married to Elena Oruzheva and has two daughters, Larisa and Irina.
Sources: Finance

Dossier:
The most puzzling thing about Oruzhev's business activity was the fact that he repeatedly disclaimed ownership of a stake in Petromir company.  When asked about his participation, he said that he was only a consultant and an oil prospector. In 1999 Petromir  was established by prominent chess player Anatoly Karpov, who also refused to comment on his own relations to Petromir.  Oruzhev  managed  a half of Petromir's shares through an offshore company. Oruzhev and  his wife co-owned Jumar Holdings company, registered on Nevis island.  Jumar Holdings owned 50% of  Petromir UK Ltd British company, while another 50% belonged to Stroytransgaz company. Petromir UK Ltd, in turn, was an owner of  Petromir LLC. Change in ownership occurred after Karpov had failed to find a few million dollars to start prospecting and decided to sell the company.

In January 2007  Petromir  LLC apllied to the Federal Agency for Subsoil Use to register   Angara-Lena massive natural gas deposit in the Irkutsk region. The deposit was estimated to obtain  2.7 trillion cubic metres, which was  comparable to famous Kovykta deposit. Test drilling was conducted under Oruzhev's direct supervision. He called it " playing the roulette." Some people were scheming to remove Oruzhev from developement of the rich deposit.  Deputy head of the Federal Service for Supervision of Natural Resources Oleg Mitvol suggested that an announcement  about  large gas reserves could be a major scam. According to Mitvol, he had certain documents proving that reserves of Angara-Lena deposit were greatly exaggerated. Despite being pressed by  officials,  Oruzhev sought to negotiate with  Gazprom. As Petromir company was not large and rich enough to exploit the deposit, Oruzhev was ready to sell the rights to exploitation for 500 million dollars, but Gasprom did not respond to Oruzhev.

In July 2010  Rosprirodnadzor, the Federal Service for Supervision of Natural Resources,  continued to attack  Petromir.  They appealed to the Federal Agency for Subsoil Use and asked the agency to withdraw an oil  licence from  Oruzhev.

Rosprirodnadzor refused to comment on what kind of violation Petromir had committed. The only reason for this so-called state raid  could be certain strategic plans of the government. It was unlikely that  Gazprom put pressure on the officials, as the monopoly claimed that it was not going to develop the South-Siberian gas reserves at least until 2017. Oruzhev, who found a rich  deposit, was in a very ambiguous situation: he could not find a buyer in the domestic market, while it was clear that the officials sought to take developement of the deposit  in their own hands as soon as possible.

In 2011, despite his business failures, Oruzhev  chaired  Organizing Committee of the International show jumping tournament. However, his activity did not help Russian team win. Oruzhev admitted, " Russian equestrians are not ready to compete with world's best sportsmen yet". But he observed that  the main thing for the moment was to prepare Russian team for 2016 Olympics.