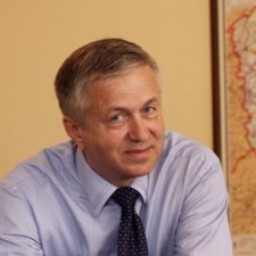 Born on December 7, 1952 in the Tula region, and in 1975 graduated from the Tula Polytechnic Institute

He started working on Kopeyskoye Engineering Plant, left the company as chief designer

1995 - Became CEO of Sibuglemet which he founded in the same year, together with the former commercial director of the union Kuznetskugol, Anatoly Smolyaninov and Valentin Buhtoyarov and Vladimir Melnichenko

2003 became the president of holding "Sibuglemet"

In 1995 Skurov became CEO of the company "Sibuglemet", which he founded in the same year, together with a former commercial director of the association Kuznetskugol Anatoly Smolyaninov, Valentin Buhtoyarov and Vladimir Melnichenko.
Source: Kommersant (Perm) № 149 (4447) on 17/08/2010

In 1997, Kuzbass company Sibuglemet and the Moscow Metallurgical Investment Company (MIKOM), headed by Mikhail Zhivilo created on par the companies Sibugleinvest and Investuglesnab. Then 40% stake in Mezhdurechie turned out to be in the hands of those companies. Valentin Bukhtoyarov was appointed CEO of Sibugleinvest and Skurov was in "Investuglesnab. Partners agreed to share their experiences, as well as to conduct a unified sales policy in order "Mezhdurechie" received as much profit.

But some time later MIKOM began selling coal of the company at prices below the market. Coal was given to structures controlled by MIKOM, the difference remained in MIKOM and "Mezhdurechie" was not making a profit.

Representatives of Kuzbass did not like the situation and the conflict arose. In May 1999 Bukhtoyarov and Skurov came to a meeting of shareholders in "Mezhdurechie" and learned that they had not been the CEO of Sibugleinvest and Investuglesnab for the past two months. Confirming documents have never been submitted.

Control over the "Mezhdurechie" was in the hands of MIKOM; seven of its representatives and hired managers appeared in the board of directors of the company.

MIKOM representatives announced the convening of general meetings of shareholders in "Sibugleinvest" and "Investuglesnab”, but notices for the names of Skurov and Buhtoyarov were sent to the address of the MIKOM and its subsidiaries. Therefore Skurov and Buhtoyarov had been fulfilling their duty for all two months, not knowing about the produced change in leadership. Meanwhile, the new directors of the company were not announced, who were then engaged in the sale of "Mezhdurechie" belonging to front companies by "Sibugleinvest" and "Investuglesnab". Shares of 399 rubles were sold for 1 ruble each. Those firms were created specifically for the fraud, led by their employees from the juridical department of MIKOM.

However, it was not going smoothly for MIKOM. A criminal case was filed on the fact of falsification of shareholders meetings and fraudulent acts with the shares of "Mezhdurechie". Coal of "Mezhdurechie" was distributed almost free of MIKOM subsidiaries for resale.

Not to put up with the crooks, Skurov and Bukhtoyarov went to court with claims to invalidate the sale of shares of Mezhdurechie.

In 2000, the court found all transactions with shares of "Mezhdurechie" illegal. According to the court, they had to be returned to "Sibugleinvest" and "Investuglesnab”. The court also found that Skurov and Bukhtoyarov were the true directors.

MIKOM did not want to lose control over "Mezhdurechie" and decided to buy the shares owned by the labor collective. The ally of MIKOM appeared to be the company Avtobank-Stileks, which tried to catch the action with the help of leadership "Mezhdurechie", controlled by MIKOM. Protege of MIKOM, Zhilin - Director General of the coal cut - called workers to sell their shares immediately, declaring that there will be no dividends. Those who refused to sell theshares were threatened with dismissal. “Avtobank-Stileks” opened a buying-up station in front of cabinet of the director general of Mezhdurechie". But blackmail had no success: the shares were sold to competitors of MIKOM.

MIKOM did not give up after that, and tried to declare bankrupt the company of Buhtoyarov and Skurova to put in there its arbitration managers and seize the shares. But this attempt failed.

In the end, the shares of "Mezhdurechie" have been re-credited to the name "Sibugleinvesta.
Source: "Polit.ru" on 11/08/2000

In 2005, in Mezhdurechensk a new coal preparation plant "Mezhdurechensk" was opened by the Company "Sibuglemet”, whose president is Skurov. Skurov called the factory the first in the industry in terms of technology.
Source: Kommersant (Novosibirsk) № 113 (3197) from 23.06.2005

In September 2005, "Sibuglemet” acquired one of the first telecommunications companies in Siberia "Integrated Telecommunication Systems” (STS-Holding), which was engaged in mobile communications, Internet and telephony. Specialists were puzzled why the coal company could need such a resource, and believed that Skurov did not know why he had bought the company. "Sibuglemet” has also committed itself to the debts of the company.
Source: Kommersant (Novosibirsk) № 168 (3252) on 09/08/2005

In March 2006, Skurov together with the heads of the coal company “Mechel”, “Yuzhkuzbassugol” and “Raspadskaya Coal Company” signed an agreement on socio-economic cooperation with the regional administration in the southern Kuzbass. The company promised to increase coal production by 7 million tons.
Source: Kommersant (Novosibirsk) № 49 (3380) dated 22.03.2006

In 2007 the authorities of the Kemerovo region decided to introduce a preliminary degassing of the coal mines of the region (to get rid of methane before the start of drilling) in order to avoid accidents. "Sibuglemet" pledged to invest in degasification of the mine "Polosukhinskaya”, and also signed an agreement with the administration on social and economic cooperation.

Skurov agreed to utilize the methane from their mines without getting compensation payments from abroad.
Source: Kommersant (Novosibirsk) № 59 (3635) dated 10.04.2007

In July 2007, authorities of ZATO (“Closed Territorial-Administrative Facility”) Big Stone in Primorsky Krai denied "Sibuglemet” in the construction of a new port in the bay, as the project could cause serious environmental damage. Public made a stand the construction: people were afraid that the coal dust from the transshipment of coal would pollute the coastline and the bottom of the bay Suhodol. Nevertheless, "Sibuglemet" was in no hurry to abandon plans for construction, because the port could help the company enter the market in Japan, Korea and Taiwan, and a lot of money had already been spent on its preparation. According to company representatives, the design of the terminal provides for measures to prevent the emission of coal dust. "Sibuglemet" intended to convince the authorities and the public.
Source: Kommersant (Novosibirsk) № 119 (3695) of 10.07.2007

In February 2008, an auction for state-owned stake of the port OAO Eastern Port was held. It was claimed by OOO “Edis”, ZAO “Sibuglemet" and "Horda". The winner happened to be "Sibuglemet”. But in March the same year, controlling shareholder of the port company Kuzbassrazrezugol (KRU) intended to protest the auctions. According to chairman of the board of directors Andrey Bokarev, the auction was held illegally since the KRU (Kuzbasrazrezugol) was not allowed to take part in them. The representative of "Horda" which is the company representing the interests of "Kuzbassrazrezugol”- allegedly just could not find the right cabinet for Basic Research, and was late for bidding.
Source: Kommersant (Khabarovsk) № 46 (3863) of 21.03.2008

In June 2006 the Moscow Arbitration Court recognized the results of the tender invalid. It turned out that in the information memorandum about the trades did not specify the exact location of the auction, only the address of the RFBR and the date of commencement of trading. Representative of "Horda" was not given information on the spot; he raced from floor to floor, until the auction ended.
Source: Kommersant № 96 (3913) on 05/06/2008

In 2009 Sibuglemet signed a contract with South Korea's POSCO Corporation for the supply of coking coal and pulverized coal.
Source: Kommersant (Krasnoyarsk) № 178 (4233) on 09/25/2009

In 2010 Skurov with a State Duma deputy Zelimkhan Mutsoev became a shareholder in potash producer “Silvinit”. According to rumors, shares were bought for Suleiman Kerimov, head of "Nafta-Moscow", which recently took control of the company Uralkali. A complicated buying schemes was needed to avoid coordination in the FAS and the offer to minority shareholders. Kerimov was planning to merge Uralkali and Silvinit.

Mutsoev was a friend of Kerimov and Skurov was a good friend of the owner of Eurocement Group, Filaret Galchev (together with Kerimov gained control of the Uralkali, in the 90's worked with him in the company Rosugol).
Source: Kommersant (Perm) № 149 (4447) on 17/08/2010