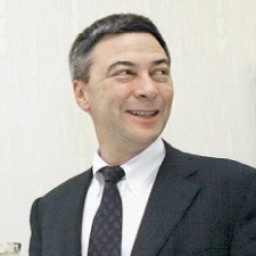 Andrey Akimov was born in 1953 году in Leningrad. In 1975 he graduated from the Faculty of International Economics at Moscow Finance Academy.

From 1974 to 1987 he held managerial positions at Vneshtorgbank (VTB).

From 1985 to 1987 he was deputy director of a Vneshtorgbank branch in Zurich, Switzerland.

From January 1991 to November 2002 he was managing director in financial services company IMAG GmbH in Vienna (Austria) and staff advisor to of Vneshtorgbank board of trustees chairman.

Since November 2002 Akimov has been chairman of Gazprombank JSC board of trustees.

Andrey Akimov has worked in the Soviet banking system. He comes from the Vneshtorgbank system. Until 1985 he headed the department of financial transactions in VTB USSR.

In November 1990, Akimov was dismissed from his post as chairman of Donau-bank, which he headed since 1987. The ground for the dismissal was his “over- expansive business strategy” which allegedly was the reason behind the Austrian bank taking to working with the Bulgarian debt. In spring 1990, Bulgaria declared a moratorium on servicing its external debt.

In Russia, since May 2005 no one asked why Robert Novikov , the beneficiary of Jurimex and a good friend of Gazprombank head Andrey Akimov,  was about to start earning 40 million dollars a year from a Gazprom contract. Gazprom board of directors, a half of which is made up by government officials, saw nothing wrong in Gazprombank establishing a joint venture Centrex Group for Jurimex, even though it came about only a couple of months after the appointment of Akimov to Gazprombank in 2003.

Robert Novikov is a longtime business partner of Andrey Akimov, the Gazprombank head.  For many years Akimov had worked in Austria. According to the media, in 1991 Austrian Jurimex Commerz Transit controlled by Novikov was the largest dealer of oil supplies to Belarusian refineries, its market share at 20%. Jurimex bought oil from Russian companies, in particular from Surugutneftegaz, and sent for processing to Naftan. This was how Novikov met Akimov, who then was managing director of the Austrian financial company IMAG that bought oil and oil products in Russia, says a Gazprom manager. Current Gazprom deputy president on export Aleksandr Medvedev was IMAG co-director.

In 2006, the Italian Anti-Monopoly Service was investigating the deal between the Italian ENI and Gazprom, under which the later could sell gas in the retail market in Italy. Deputies were worried because to sell the gas the Russian monopoly addressed Central Italiana Gas Holding Company owned by Bruno Mentasti Granelli, a good friend of Berlusconi. The deal did not work out.

Yet, Swiss Commercial Register has paperwork of some of the Centrex companies that together with Granelli controlled the failed seller of Russian gas in the retail market. The papers showed that Centrex was nothing more than a renamed entity of Jurimex group. This group was known for supplying oil to Belarus and buying it, in particular, from Surgutneftegaz. The Swiss paperwork pointed out that among the top managers of the company there was Robert Novikov, chairman of Baltic Holding, among the owners of which until 2005 there were Gazprombank and Jurimex. Here, again, all ties led to Gazprom and its structures.

Jurimex, headquartered in the Caribbean offshore, drew attention of the Austrian public prosecutor on suspicion of corruption by the Israeli Prime Minister Ariel Sharon. A total of 4.5 million dollars was transferred to the accounts of the son of Ariel Sharon, Gilad. The transactions went, in particular, through the Austrian bank BAWAG in Vienna. During an investigation Austrian magistrate Gerhard Jarome found that the money transferred to Sharon's son most likely were linked to the largest casino owner Martin Schlaff. His casino earned the entrepreneur up to 700 thousand dollars a day until it was closed down in 2000. According to the magistrate, it was a Schlaff’s entity Getex, headquartered in the Caribbean, that had to do with money transactions to the Israeli prime minister's son. But the main thing was that the entity shared an office with Jurimex. The Austrian magistrate noted that its business interests were linked to the gambling business of baron Shlaff and Russia.

The magistrate and the Israeli press overlooked one detail. Let’s complete the picture. In the past Austrian Bank BAWAG, through which the money went to Sharon’s son, had projects with Robert Novikov, who, according to documents from the Swiss Commercial Register, was linked directly to Jurimex (later renamed into Centrex), at least in Europe, and was closely linked to Gazprombank, its entities and leadership. Austrian Aisi Group (Vienna) brochures said that back in 1997 - 1998 BAVA, Jurimex, and an investor from Poland were the customers of a 1.96 million euros project in Austrian Tyrol.

Deputy Prime Minister Igor Sechin will no longer be a member of Rosneftegaz holding board of directors. His place will be taken by Andrey Akimov, whose candidacy was put forward by the Ministry of Energy. Akimov, a banker, will have to manage an instrument of national importance, since Rosneftegaz, established in 2004, is a special purpose entity.

Akimov has long known Putin and could address him directly. Much of the success Akimov had in his career is thanks to Gennady Timchenko, whom he knew even before working for Gazprombank.

In 2011 Ukrainian President Viktor Yanukovych announced his decision to revive the investigation into RosUkrEnergo (RUE) leaving the gas market of Ukraine in 2009. More precisely, the President decided to make this revival into a kind of judicial review of the actions by his political opponents.

Since the establishment of RUE (from 2004 to 2007) the current head of control department of the Presidential Administration Konstantin Chuichenko was its permanent executive director. He studied at Leningrad State University with Dmitry Medvedev. Among other co-student of Chuichenko there is Igor Eliseyev and deputy chairman of Gazprombank Andrey Akimov who was legally the first and leading figure when RUE was founded. Akimov’s signature as that of the bank’s head with the powers of the owner of 50% of RUE is first in the company’s charter. However, after the murder of Aleksandr Litvinenko in London he had to withdraw from the company’s board. According to the European mass media, Litvinenko's book, Lubyanka criminal group, was one of the reasons for his assassination. Litvinenko’s memoires say that in 1959-1969 Akimov and Putin were school friends. In 1974-1984 they both were among the most promising, as it was believed, experts of the 4th and 3rd divisions at the KGB First Chief Directorate.