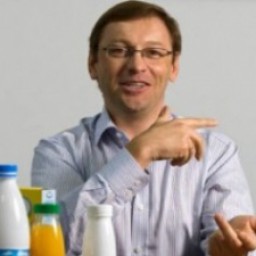 Andrey  Beshmelnitsky was born on 25 March 1967 in Voroshilovgrad city, now renamed as Lugansk . In 1984 – 1991 he was a professional football player. In 1989 he graduated from a teachers' training school in Stavropol.

In 1992 he headed a private company in Stavropol that was engaged in advertising and printing industry.
In 1994 he was a  deputy director of Stavropol office of  Inkombank public company.
In 1995 - 1998  Beshmelnitsky was a  president of Agroinkom company and worked as a project manager for Inkombank.
In 1998  he headed an agricultural department of RaboInvest company and agricultural department of Moscow office of Rabobank bank.
In 1999 he was a deputy director-general and later was appointed director-general of  Omsky Bacon group.
In 2000 he was appointed director-general of  Planeta Management.
Since 2002 he has been director-general of Unimilk public company.
He was ranked 146 in the list of «the richest businessmen of Russia in 2011" made by Forbes magazine. His wealth was estimated at  $ 650 million.
Beshmelnitsky is married and has two children.
Source: Mega-Stars

In 1993, owing to his connections, Beshmelnitsky was appointed deputy director of Stavropol office of  Inkombank public company. Three years later he moved to Moscow and got engaged in buying up food companies for Inkombank. In 1997 he was reported to help Inkombank with purchasing of Omsky Bacon holding company, one of Russia's major producers of meat and meat products. His career there ended with complete financial collapse of Incombank after the default in 1998.

On  24 November 1997 first deputy governor of the Omsk region Andrei Golushko said that "having deceived the shareholders", directors of Inkombank and  Omsky Bacon made an agreement ''in collusion''. As a result, Inkombank purchased controlling stake of Omsky Bacon, the largest pig-breeding enterprise in Russia, only for 12 million rubles, whereas  the property of Omsky Bacon  was estimated at 1313 million rubles at the time.

On 28 November  the governor of the Omsk region met with  manager of the West-Siberian regional office of  Incombank  Siman  Povarenkin. The next day he announced by the radio that about 20% of bank shares would be controlled by the local administration and local authorities would get the chairman's seat and veto power over social issues. None of this happened. In August 1998 financial crisis broke out and ''killed'' Inkombank.

On 16 November  1998 Property Fund of the Omsk region   sold 19.96% shares of  Omsky Bacon to Trussardy Lnvestments Limited company, registered in the Bahamas, for over 8 million rubles. As it became known later, retired  president  of Sibneft Andrei Blokh masterminded  the deal, since he quitted Sibneft  to start his own business.

On  21 May 1999 new board of directors were elected by shareholders of Omsky Bacon. Four of its seven members were Moscow representatives. Alexander Podgursky was appointed director-general, but Andrei Beshmelnitsky virtually managed the company.

On  8 September  1999  acting prosecutor of the Omsk region  Viktor Grin filed a lawsuit  to the arbitrage for annulment of the agreement between Property Fund of the Omsk region and Trussardy Investments Limited . On 28 October the court satisfied the claim and  the company was prohibited from any share operations, including voting. Thus Andrei Blokh at once lost his controlling stake. Meanwhile, managers of  Sibneft  were actively buying up the shares of the company. Officers of tax and law enforcement agencies came to Andrei Beshmelnitsky almost every day. Shareholders were overwhelmed with leaflets that called upon to sell securities not to Trussardy Investments Limited, but to the Siberian oil company that was going to establish an "agro-industrial complex." Public campaign was set against Blokh's team.

As a result, on 1 February  2000 Blokh's managers officially quitted   the enterprise. Management of  Sibneft took over the company.

After Beshmelnitsky and Blokh had quitted  Omsky Bacon, they  founded a new company called Planeta Management . In February 2002 it was reported that Oleg Tinkoff's Darya company that produced frozen products  would  make an alliance with  Planeta Management, and that alliance was not supposed to have a common management company.

At the time Andrei Blokh was reported to meet with Roman Abramovich again and invite him to participate in the business. As a result,  Planeta Management purchased Darya company, as well as Alyans retail company that owned 45 stores in Nizhny Novgorod,  and more than a dozen refineries and dairy plants in Russia.

In spring 2003 activity of  Planeta Management slowed down. Perhaps, this was the reason for  divorce  between shareholders of Sibneft and Blokh and Beshmelnitsky. In October 2003 enterprises of the Planeta group came under the direct control of Millhouse Capital, while Blokh and Beshmelnitsky received Unimilk dairy. The fact that it had not been originally planned was confirmed by  Andrei Beshmelnitsky's guarded public statements: "We have  different mentality. I'm from food industry, while they are oilmen. We have different experience, different perspectives, so not to conflict and not to make a compromise, we decided to part. We parted in a very quiet, peaceful and civilized manner. "

In June 2010   Unimilk  and  Danone French company announced the merger between their dairy assets in Russia and the CIS.  Russian company got 42.5% of shares. Although French businessmen gained a majority of voting stock in Danone-Unimilk  company, Andrei Beshmelnitsky was appointed chairman of the board of directors.

As a part of the deal, the owners of Unimilk  received about 120 million euros.

Andrei Beshmelnitsky purchased shares of Rigas piena kombinats, the leading company of Latvian dairy market, on the money he had earned from that deal.

In early February 2011 Nadezhda Kryzhanovskaya, a member of Beshmelnitsky's team, joined the board of directors of Rigas piena kombinats. Beshmelnitsky confirmed his participation in the business of RPK. "The stake is large enough to influence strategic development decisions'',  he said. A source close to the businessman  said that the purchased shares were "at list  enough for the blocking stake."