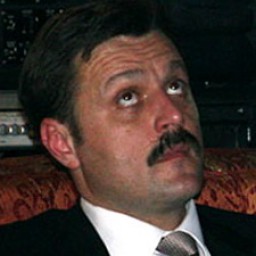 He was born on August 19, 1967 in Dnepropetrovsk. In 1989, he graduated from the Kharkov Higher Military Command Engineering School of Missile Forces named after Marshal Krylov. In 1990-1993, he studied at the Higher School of the KGB named after Dzerzhinsky (now - Academy of the Federal Security Service of Russia) in Moscow. Doctor of Law.

From 1989, he served as technology chief on the missile technical base of Pervomayskaya Division of Strategic Missile Forces.

From 1993, he worked as an operative officer in the SBU's Intelligence Department in the Dnepropetrovsk region.

1997-1998 - first assistant to the Prime Minister of Ukraine Valeriy Pustovoitenko, head of the group of assistants and advisers of the head of government.

From 1998 - Member of Parliament of Ukraine of III-VI convocation.

In 2006-2007, he combined his post of a deputy with economic positions: first - President of NNEGC Energoatom (the monopolist on nuclear energy market of Ukraine), then - Director General of the state concern Ukratomprom.

In December 1999, at the Herots hotel in Eilat (Israel), an impressive company gathered. There were Michael Cherney, Semen Mogilevich, Vadim Rabinovich (in 1999, he was accused of justice of Ukraine in various crimes and deprived of Ukrainian citizenship), Oleg Deripaska, Oleg Taranov (head of the National Agency of Ukraine for management of state property), and Andrey Derkach (Deputy of the Verkhovna Rada and son of the head of the Security Service of Ukraine Leonid Derkach). A week later, representative of the interests of the TWG Nikolay Naboka was removed from the post of general director of Nikolaev Alumina Refinery. Naboka was removed on the basis of “secret” materials provided by the Security Service of Ukraine. Instead, Mikhail Stolyarov, a person of Siberian Aluminum, became the new director of the Nikolaev Alumina Refinery.

On September 16, 2000, a prominent Ukrainian journalist Georgy Gongadze was kidnapped. A few weeks later, his decapitated body was found in a forest near Kiev. Gongadze’s work extremely annoyed not only Kuchma but also his subordinates. It can be assumed from materials obtained by Ukrainian media that Gongadze could be killed only by orders of higher officials. According to the materials, the SBU head Leonid Derkach knew from the beginning of the investigation, who had ordered the murder of the journalist. Moreover, he - in his own words - had a personal score to settle with him.

In 2001, it became known that the father and son Derkach linked to the structures of scandalously famous businessman Semen Mogilevich. Moreover, according to the media, they even connected President Leonid Kuchma with Mogilevich through some business interests. And Kuchma wasn't stopped even by information of the Ukrainian intelligence services, according to which 30% of those $ 7 billion, laundered through Bank of New York, had previously been laundered through banks in Ukraine. Semyon Mogilevich was in charge of this operation.

In 2001, another scandal with participation of Andrey Derkach broke out. He was found to exert pressure on the Odessa businessman Alexander Zhukov to force his Synthesis firm to be an intermediary between Progress weapons state company and the Ukrainian-Panamanian Global Technologies Int. joint venture. This joint venture was repeatedly characterized in reports of the SBU as a “a company violating rules of trade in the international arms market”.

Leonid Derkach resigned from his post of head of the Security Service of Ukraine after the data of the Main Intelligence Directorate of the Defense Ministry about involvement of the Derkach family in illegal delivery of arms to a number of Asian and African countries had appeared. It was, in particular, about selling arms to Liberia.

In addition, a businessman and crime boss Leonid Wulf, serving his sentence in Israel, promised to give evidence on the activities of the Derkachs. According to Wulf, Leonid Derkach together with Vadim Rabinovich was engaged in illegal delivery of weapons to all the hot spots, from the Balkans to Iraq.

In June 2008, the head of the Control and Revision Office of Ukraine Nicholay Sivulsky and prime minister Yulia Tymoshenko accused a number of people’s deputies of serious financial violations (for 10 billion UAH), which they had made being leaders of industries and state-owned companies. In particular, 3.6 billion UAH was thrown on Energoatom directed by Andrey Derkach. The Party of Regions answered the charges by the requirement to the State Prosecutor General's office to raise a criminal case against Tymoshenko and Sivulsky on “willful false informing on committing a crime”.

On November 13, 2012, representatives of the Ministry of Internal Affairs of the Svyatoshinsky district department in Kiev raided the house of the head of Konotop district organization Freedom of Artem Semenikhin - the candidate of the united opposition forces in the district No. 159. Then he was detained for 72 hours. The radio station Freedom claimed that Semenikhin was an opponent of government candidate Andrey Derkach at the elections. So “all the events concerning the Fredom’s person had to be regarded as extension of political persecution and governmental pressure on the opposition”.

According to the mother of Artem Semenikhin, on November 18, 2012, an unknown man advised the parents of Artem “to bow down at his feet and beg forgiveness from Andriy Derkach, unless they want to get remains of the body of his son”.