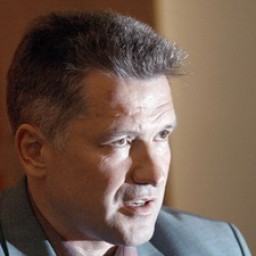 In 1987 he graduated from Moscow Power Energy institute.

Up to 1992 he worked in scientific production association, and then he came to Friedman's company.

In 1998 he was appointed as the first deputy of the chairman of the bank.

In 2005 he stopped operation work. He is the minority shareholder in all holdings of company Alfa Group.

In 2007 structure of Alfa opened the new project – the specialized savings and loan association, which was entrusted to Kosogov to be managed. Also he is a chairman of board of directors of telecommunication company Altimo.

In 2010 Kosogov controls Alfa bank supervisory board in Ukraine, and also supervises investment business of the company.

Kosogov is married, has two children. His wife is a well-known designer.
Source: lifexchange.ru

In 1993 the quantity of the involved vouchers of the investment fund "Alfa capital" headed by Kosogov reached one million. There was a press conference where Kosogov showed the report on fund activity for all time of its existence at that point in time. But another issue became the most discussed: participants of the conference said that acceptance of the project of the decision "About the state guarantees of the right of Russian citizens on participation in privatization" by Presidium of Council of Russia was inadmissible. This project suspended the presidential decree from May, 8th, 1993 obliging the enterprises to expose not less than 29 % of shares to check auctions. Kosogov was against of it having considered that project acceptance as well as delegation of power of the State Property Committee of Russia to local authorities, would make impossible functioning of check funds and would give possibilities for gamble, and also would discredit privatization in people’s opinion. It is remarkable that Anatoly Chubais was invited to discussion then, but neither he, nor someone other of the State Property Committee showed up.
Source: «Kommersant» № 133 (356) from 7/16/1993

The project also provided possibility of violent change of the manager of the fund, but Kosogov explained that he did not care about such prospect. In his opinion, value of the actives got by private investment fund mostly depends on personal relations of the managing director, therefore the violent transfer will automatically depreciate these actives that can lead to bankruptcy of the fund, and the State Property Committee just isn't interested in it.
Source: Magazine "Kommersant" № 23 (85) from 6/28/1994

Kosogov also informed that "Alfa capital" developed essentially new strategy on check placing according to which the involved means were invested not in large, but to the medium-size enterprises.
Source: «Kommersant» № 133 (356) from 7/16/1993

In December, 1994 of 80 % of shares of Moscow confectionery factory "Bolshevik" were got by the French company Danone has got, which was also obliged within six years to invest 30 million dollars for development of the factory. The seller of a controlling interest of "Bolshevik" was "Alfa capital"; the company had consolidated that package before. It happened when enterprise "Bolshevik" was exposed on check auction, and "Alfa capital" decided to take part in it. Employees of the fund redeemed shares, everyone paid with his own voucher, therefore according to the results of the auction the fund was not mentioned in the register of the buyers, however it managed to gather 22 % of shares of "Bolshevik". Then employees wrote out powers of attorney to "Alfa capital".

When representatives of fund came to the factory, local workers considered that they had interfered their affairs and didn't talk to them, and at the meeting of shareholders representative of fund was not allowed to participate in voting.

But a situation was handled by Credit Suisse First Boston which was the financial adviser and the organizer of check auction of "Bolshevik". Its employees managed to persuade workers of the factory to negotiations, and the compromise with the fund was reached: it didn't insist on participation in meetings of shareholders.

"Alfa-capital" and "Bolshevik" were rallied with search of the strategic investor. The companies agreed that shares would be sold only to the one who would desire to enclose real means in the factory development.

When Danone appeared among applicants for shares of "Bolshevik", "Alfa capital" started to create a large share holding, redeeming them at shareholders. They did not inform them, whom package was formed for, therefore they did not face any special problems. Even the schedule was made for buying up of shares not to tear off workers from manufacture and not to create the line.

After the transaction "Bolshevik" kept the trade mark and assortment which was only added with new recipes. It was the first experience of Kosogov in the large investment project in "Alfa capital".
Source: Magazine "Kommersant" № 3 (114) from 1/31/1995

In 1995 "Alfa capital" bought a part of a share holding of AO "Lubyatovo" - the industrial complex producing cookies. Kosogov made purchase even before he visited at the enterprise as the price was not so high. But it was soon found out that the struggle for the shares of this enterprise was conducted. At first monetary auction took place which "Alfa capital" was not aware about, and the administration sold a share holding to the partner – to local enterprise "Pskovmash" in order to buy them up later. However then they had lack of money, and other local firms found out these shares. Kosogov had to have a talk urgently with the director of "Pskovmash" to redeem shares, but by that moment it appeared that shares were already promised to one western company. And they were sold to it.

After that Kosogov understood that the industrial complex was interesting for the western companies, started buying up shares at enterprise team. Quickly enough he generated a controlling stock that allowed solving the issue with industrial complex management.
Source: Magazine "Kommersant" № 9 (120) from 3/14/1995

In 1996 Kosogov together with colleagues from a management of "Alfa Group", president of "Alfa bank" Peter Aven, the chairman of the council of "Alfa Group" Mikhail Friedman, the vice-president of Alfa bank Alexander Gafin, the councilor of directors of "Alfa Group" Herman Khan, the chairman of the board of "Alfa-Estate" Boris Kiperman, the councilor of directors of "Alfa-Eco" Andrey Shelukhin and the director of "Alfa-Eco" on foreign economic relations Alexey Kuzmichev took part in jeep safari Camel Trophy in Borneo (Malaysia). Expedition of businessmen passed more than three thousand kilometers.
Source: «Kommersant» № 173 (1131) from 10/12/1996

In 1997 Kosogov met the Minister of Communications of Ukraine, Dmitry Khudoliy in Kiev to discuss the possibility of participation of "Alfa Capital" in privatization of a monopolist of republican communication "Ukrtelecom".
Source: «Kommersant» № 110 (1292) from 7/15/1997

In 2002 OAO "Alfa-Insurance" which board of directors Kosogov participated in, underwent the check of financial and economic activity. The check beginning coincided with rumors about resignation of Denis Kiselev, the president of insurance group. He wasn't included into new board of directors. Soon in the company the post of the general director was opened which was occupied by the former chief executive of company "NIKoil" Vladimir Skvortsov. Kiselev stayed only as representative.

Also in 2002 it became known about acquisition by structure of "Alfa Group" (company "Alfa Telecom)" of a new telecommunication active, the Ukrainian cellular company «Kievstar GSM». The Norwegian company Telenor became the co-owner.

Before "Alfa Groups" already became the co-owner of the telecommunication company in Ukraine – in 2001 the company got a share holding of «Golden Telecom Inc». Then "Alfa" bought blocking share holding of OAO "Vympelcom" owning networks "Beeline", and Telenor also was the co-owner then.
Source: «Kommersant» № 190 (2559) from 10/18/2002

In July, 2004 Alfa bank’s management inducted ten-percentage commission at prescheduled termination of the depositary contracts. With this measure it was possible to slow down an outflow of investors for a while, however, not up to the end. Soon to keep them, the bank management cancelled the commission, and the incomes received from it were directed on increase in interest rates under all fixed deposits. This measure was chosen for encouragement of the investors who did not get in to a panic.

In 2006 «Alfa of group» declared merge of business of actives and direct investments management: "Alfa capital" and Alfa Capital Partners united under brand Alfa Asset Management (AAM). There was also a change in top management – "Alfa capital" was headed by Mikhail Khabarov, and Kosogov started to carry out a strategic management instead of American Bernard Sacher.

Post of the chairman of board of directors which was held by Sacher, was cut off, and he was offered to enter into board of directors of AAM. The real reason of Sacher’s dismissal was that he did not live up expectations on attraction of foreign clients.
Source: «Kommersant» № 161 (3492) from 8/31/2006

Soon Sacher declared the resignation. Thus, for the end 2005 – the beginning of 2006 almost completely all top-management team in "Alfa capital" was replaced. Before the general manager director Anatoly Milyukov left to Gazprombank, and later the group of portfolio managers followed him.
Source: Magazine «Sekret Firmy» № 32 (167)

After Milyukov left Kosogov complained that he had led away clients for 50 million dollars.
Source: Magazine «Firm Secret» № 6 (238) from 2/18/2008

Kosogov is informally considered one of minorities of the Russian holding company Altimo which includes actives of "Alfa Group": 44 % of "Vympelcom", 25,1 % of "Megafon" and 43,48 % of "Kievstar". In 2010 it was said that together with others minorities Kosogov could become the owner of more than 12 % in new company VimpelCom Ltd which should unite "Vympelcom" and "Kievstar".
Source: Ukraine № 26 from 2/15/2010, ПН