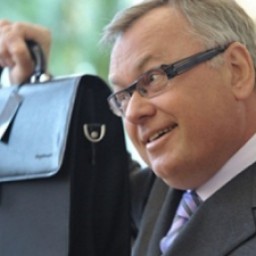 He was born on September 21, 1956, in Moscow. In 1979, he graduated with honors from the economic faculty of Moscow State University of Lomonosov, majoring in international economics. In 1982, he defended his thesis and received an academic degree of Candidate of Economic Sciences (his thesis was “Globalization as a form of internationalization of the economy”).

In 1979-1992, he was in the diplomatic service: in the General Consulate of the USSR in Australia, in the USSR Embassy in Great Britain.

In 1993-1995, he was Deputy Head of the Foreign Investments Department of Imperial Bank. In 1995, he was elected the first Deputy Chairman of the National Reserve Bank (NRB).

On October 18, 1996, by a decree of the President of the Russian Federation, he was appointed Chairman of Vnesheconombank (VEB).

On June 10, 2002, he was appointed the President and Chairman of the Board of Vneshtorgbank (VTB).

In July 2007, joined the Board of Directors of Russian Railways OJSC (RZHD) and was re-confirmed in this position in July 2008, but in 2010 he refused to re-election because of the desire to fully concentrate on the work in VTB.

In November 2011, he was appointed Chairman of the Business Council of the Summit of the Asia-Pacific Economic Cooperation (APEC), which conducting was planned for September 2012 in Vladivostok.

He is a son of the famous Soviet statesman, Kostin Leonid Alekseevich. He is married. He has a son and a grandson.

Kostin became a banker through necessity – when his chief (President of the National Reserve Bank Alexander Lebedev) proposed to appoint Kostin as a person, who never led and, therefore, had a clean reputation. Kostin gained the first experience of banking in Imperial Bank in 1993. In 1995, he left the post of the Deputy Chief of the Foreign Investment Department Imperial Bank and became the first Deputy Chairman of the National Reserve Bank (NRB).

In 1997, the General Prosecutor's Office of the Russian Federation initiated a criminal case on the application of Fedorov Igor Igorevich, living in the USA as a stateless person. The statement indicated that a number of managers of NRB, involving their relations, including those in state institutions, made a number of transactions using internal currency bonds (ОВ83). They transferred abroad about $30 million to accounts of specially created companies, which were used for “laundering” income received unlawfully.

The heads of NRB Lebedev and Kostin were directly involved in these transactions, as well as an advisor to the Chairman of the Board of the Bank Roman Shvetsky. Through his relations in the Ministry of Finance, Lebedev bought the internal currency bonds for $190 million (with the par value of $1 billion.), i.e. for 19 % of their actual value. Thus, even at this stage, the representatives of the bank made a potential profit of $110 million. With the aim of concealing the income from sale of the securities, Shvetsky and Kostin, signing all official documents, originally entered into an oral agreement with Fedorov, who then opened and registered several offshore firms at their request.

Then they applied a scheme, allowing to conceal participation of the true owner of the internal bonds (ОВВЗ), that is, the NRB, in the operations on transfer the currency abroad.

NRB concluded an official agreement with Fedorov on exchange of the OBB3 bonds of the 6th and 7th tranches for the bonds of the 5th tranche. However in fact, on the order of Shvetsky and Kostin, Fedorov credited all the funds received from the sales of OBB3 bonds to a correspondent account of American International Bank in Mosbusinessbank in favor of companies opened by him, and then, also on verbal orders of Shvetsky and Kostin, the currency was transferred to accounts of companies in the Cayman Islands and, finally, to accounts of companies in various banks in Switzerland. One of the firms had a name of Lebeko, which literally means “Lebedev and Kostin”.

In 2009, there was a scandal with the purchase of 30 drilling rigs by VTB-Leasing. Alexey Navalny wrote in his blog that the purchased drilling rigs were 1.5 times more expensive than the official price of the manufacturer specified in the price list: $457 million instead of $300 million. In his opinion, this occurred only at the expense of participation in the transaction of an intermediary - Clusseter Ltd of Cyprus. It acquired 30 drilling rigs from the Chinese Sichuan Honghua Petroleum Equipment Co. Ltd and resold them to VTB-Leasing. VTB had a different explanation: such a price for the leasing company appeared to be like that because it included installation, customs clearance, warranties and spare parts (as opposed to the contract of Clusseter Ltd with the manufacturer). Even Kostin had to excuse for the transaction. “The Director of VTB-Leasing has fired... None of my colleagues... took any money”, he said.

Navalny demanded to declare the transaction on purchasing a 30 drilling rigs void, however, the Federal Arbitration Court of the Moscow District dismissed his claim, having confirmed the judicial acts of the first and appeals instances. Navalny accused the ex-General Director of one of the companies, that had received the drilling rigs in leasing, of fraud and corruption crimes. The lawyer claimed that having paid a bribe to the Moscow tax authorities, Well Drilling Corporation Company illegally recovered VAT for 119 million rubles from the budget. The accusations of Navalny were set out in the statement about the crime, which he sent to the General Investigation Department of the Investigative Committee of Russia.

In November 2010, after the resignation of the Moscow mayor Yury Luzhkov, it became known about the intention of VTB headed by Kostin to consolidate 100% of shares of Bank of Moscow. The struggle for control over the bank between Moscow government and VTB on the one side and top-managers and co-owners of the Bank of Moscow - the bank's president Andrey Borodin close to Luzhkov and his advisor Lev Alaluev - on the other side continued for a year. The first party won: on February 22, 2011, VTB closed the transaction on purchase of the shares of the city government in the Bank of Moscow, as well as 25% plus one shares in Stolichnaya Insurance Group, (SIG) (the Moscow city government had directly owned 46.48 stake and it had owned other 4.33 stake through shares in the SIG). On February 24, at the suggestion of Borodin, Kostin was elected Chairman of the Board of Directors of the Bank of Moscow (instead of the first Deputy President of the Bank of Moscow Dmitry Akulinin, elected to the post a few days earlier, on February 21). It was not reported why Borodin, previously had “fiercely resisted the coming of VTB”, changed his position, however, experts believed that transactions organized “at the expense of arms twisting” never came to good. So, even before the election of Kostin the head of the Board of Directors, some observers connected the searches on February 17 conducted in the bank headed by Borodin with the corporate conflict between VTB and the Bank of Moscow.

On April 8, Borodin reported that he had sold his entire stake. Commenting on this statement, the representatives of VTB stressed that the state bank did not buy the Borodin’s shares. In September 2011, VTB announced that it had increased its stake in the Bank of Moscow from 46.48 % to 80.57 %, not specifying from whom the additional shares were purchased. According to the media, VTB acquired 19.91% of the shares from businessman Vitaly Yusufov (which, in turn, in the spring of 2011, bought them from Borodin), other 3.88 % - from Senator Suleiman Kerimov, and the remaining shares were likely acquired from the Stolichnaya Insurance Group.

After consolidation of the shares of the Bank of Moscow, the Deposit Insurance Agency transferred a loan of 295 billion rubles to assist the bank. After completion of this transaction, in October 2011, the Prime Minister Vladimir Putin unexpectedly criticized Kostin. The premier characterized the purchasing of the Bank of Moscow as follows, “You have got there but now you don’t know how to be washed. And then you come to the government asking to rescue and help”.

In December 2011, it became known that VTB headed by Kostin had purchased 20 % stake of a major holding Metalloinvest. In this connection, the press noted that shortly before that VTB had filed a big claim to one of the structures of Metalloinvest, which could be seen as the beginning of a judicial war between Kostin and the main co-owner of the holding Alisher Usmanov, and it was assumed that only unwillingness to confrontation made Usmanov didn’t prevent the transaction.

In November 2012, the Russian Forbes placed Kostin first in the rating of the most highly paid top-managers of Russia. By estimates of the edition, in 2011, he earned about $ 30 million. VTB officially denied the information of the magazine on Kostin’s earnings.