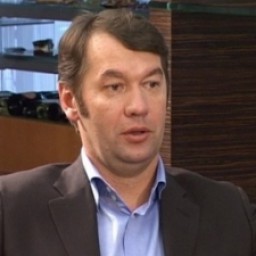 1987 graduated from Perm University faculty of economics, worked as an economist in Perm plant “Communar”

1991-1993 took part in establishing of Perm commodity exchange, worked there as a manager

In summer 2002 chief ballet master of dancing theatre “Experiment” Eugeniy Panfilov accused Perm commodity exchange, which President was Kuziaev, of not assignment promised sponsoring money to the theatre. In protest Panfilov shaved his head. Kuziaev called Panfilov’s accusations “figment of fevered imagination”. According to him, for advertisement of “Experiment” was spent half million, but sponsoring agreement was not signed for the reason that the theatre dancing type was not considered to be beautiful. Panfilov was indignant of the fact that Kuziaev told mass media about allocation of sponsoring million, but nobody had seen the money. Consequently there left nothing to pay salary to the theatre troupe. According to Panfilov, it was hard for him to find other sponsors, because everybody asked him where did he put Kuziaev’s million.
Source: Magazine «Kommersant » № 125 (125) from 22.06.1992

In 2001 Perm region Legislative assembly sent as it’s delegate to Federation Council Victor Dobrosotskiy, head of “Mineral Trading”. Kuziaev stated his election to be the result of lobbying by the owner of JSC “Uralkaliy” Dmitriy Rybolovlev.
Source: «Kommersant » № 182 (2312) from 05.10.2001

In January 2003 “Lukoil Overseas” press service published a message that Iraq left for Lukoil a share in project of development of a deposit Kurna-2. Earlier Kuziaev personally visited Baghdad and negotiated with Vice President of Iraq Taha Yasin Ramadan and reached the agreement about remission of mutual claims. Earlier the government of Iraq announced of ripping up the contract with Lukoil. According to “Lukoil Overseas”, at the same time it was decided to hold a meeting of the project executive board – united executive committee, which meetings hadn’t been hold since 1999. Iraq insisted that Lukoil would force working in the fields irrespective of UN sanctions. However the works hadn’t been done.
Source: «Kommersant » № 7 (2610) from 18.01.2003

In June 2003 Kuziaev and Vice-president of CJSC “Kazmunaishgaz” Timur Kulibaev signed in Astana agreement of cooperation in trial and extraction of hydrocarbons in Kazakhstan sector of Caspian Sea.
Source: «Kommersant » № 110 (2713) from 27.06.2003

In December 2003 Perm financial and industrial group (PFIG), controlled by Kuziaev, purchased two A class office centers in Moscow. It was the former Samsung mansion in Gnezdnikovskiy side street, bought from Capital Investments LLP, and also a building in 8 March street nearby Moscow branch of Swedish Ericsson Inc. After that PFIG ranked the third by the amount of investments in capital office real estate.
Source: «Kommersant » № 235 (2838) from 25.12.2003

In 2004 at the extra stockholders’ meeting of OJSC PFIG was taken a decision to reorganize the company to Limited Liability Company. It was planned first to set up authorized capital of PFIG Ltd so that the owners could afterwards exchange their shares for investments in LLC.
Source: Kommersant (Perm) № 5 (2844) from 15.01.2004

The same year Kuziaev was elected new Chairman of board of public organization “Perm association”, set up to improve image and investment attractiveness of Perm region in the capital. Governor Yuriy Trutnev also gave Kuziaev a task to unite Perm association with the similar organization from Komi-Permiatskiy autonomous area.
Source: Kommersant (Perm) № 16 (2855) from 30.01.2004

In March 2004 the governor of Perm region Yuriy Trutnev at anniversary meeting of economic policy committee offered Kuziaev to lead establishing of free economic zones in Kama region. As a platform for the that Kuziaev was ready to offer plant OJSC “Morion” incorporated into PFIG.
Source: Kommersant (Perm) № 39 (2878) from 04.03.2004

In May 2004 Kuziaev visited Perm state university, where he checked the expenditure of one million dollars allocated by him for completion of new building construction. He was satisfied but refused request of university rector Vladimir Malanin to allocate additional money for completion of the construction.
Source: Kommersant (Perm) № 96 (2935) from 29.05.2004

In 2004 PFIG took part in regional stock sale auction of OJSC “Perm flour mill”, which minor stockholder was invest holding. PFIG however lost for “Skies” owned by Perm businessman Vladimir Plotnikov, chairman of OJSC “Kamcable” board. “Skies” offered double price for blocking share package. Immediately after sale the negotiations began to buy out the rest of “Perm flour mill” shares from PFIG. Besides, it was decided in PFIG in future to get rid of two more assets, considered non-core – “Chusovskiy mill” and “Permzernoproduct”.
Source: Kommersant (Perm) № 157 (2996) from 26.08.2004

In 2005 Kuziaev appeared in court as respondent against claim of Agishevs spouses to Perm mayor’s office and PFIG Ltd. Kuziaev’s company constructed elite housing estate “Petropavlovskiy” nearby their house. The spouses supposed that the construction was done with violations and they were concerned about the consequences. The court assigned an expertise, which would prove that the construction could lead to the claimants’ house fall. As an undertaking as to damages the construction was suspended. Respondents doubted the expertise. First the court was intended to assign an additional expertise, for that the consent of all parties was needed, but Kuziaev didn’t appear before the court. The representatives of PFIG also entered an appeal for cancellation of undertaking to damages.
Source: Kommersant (Perm) № 153 (3237) from 18.08.2005

The same year Kuziaev stated that “Lukoil Overseas” got applications for support of a deal on purchasing operating in Kazakhstan Bermuda company “Nelson Resources” from majority of it’s minor shareholders.
Source: «Kommersant » № 199 (3283) from 21.10.2005

In 2005 Lukoil together with Kuziaev tried to prevent “China National Petroleum Corporation” (CNPC) from purchasing assets of Canadian PetroKazakhstan (PKZ). Lukoil announced to be ready to buy 100% PKZ for the price offered by CNPC. Such a deal could be more profitable as it would have been done in shorter terms and with more determinacy. Lukoil brought also a claim to arbitration about its preferential right to buy out shares in PKZ. Lukoil also tried to negotiate with CNPC and offered to buy out company’s 50% of «Turgay Petroleum» at an equitable price, but the negotiations got nowhere.
Source: «Kommersant » № 202 (3286) from 26.10.2005

In 2006 Minister of natural resources of RF Yuriy Trutnev decided to put up for auction the unique complex of potassium fields and oilfields “Solikamskaya depressiya”. Specialty of the field was that under chlorhydric potassium and magnesium salt strata there were oilfields. Therefore “Lukoil-Perm” and “Uralkaliy” argued for a long time about the fields. The decision to put the fields up for auction brought oilmen and potassium miners to compromise mining.
Source: Kommersant (Perm) № 38 (3369) from 04.03.2006

In 2006 the Russian market of cable television entered a big player “R-Telecom”, which main stockholders were Kuziaev and former Head of OJSC “Uralsviazinform” Vladimir Rybakin. It was announced in Lukoil that “R-Telecom” – Kuziaev’s personal business.
Source: «Kommersant » № 70 (3401) from 20.04.2006

In December 2006 PFIG Overseas Investments Limited, registered in Cypros, which beneficiary was Kuziaev, bought out additional emission of the bank “Ural FD”, in the result the authorized capital of the bank increased 2,5 times, and share, owned by Kuziaev’s structures – up to 98%. Thereby, the bank became more expensive, and it turned out to be more difficult for the owners of “Kamabank”, intended to buy it.
Source: Kommersant (Perm) № 226 (3557) from 02.12.2006

In 2007 it became known about PFIG intensions to build in Dobryanskiy district of Perm region the village Demidkovo. The plot for construction was rented at an auction by daughter company of “Demidkovo-Project” Ltd group. It was supposed to construct in the territory cottages and multistoried buildings and to restore existed in real village Demidkovo, drowned in 50-th.
Source: Kommersant (Perm) № 97 (3673) from 06.06.2007

The same year the structures related to Kuziaev started negotiating with Vladimir Rybakin purchase his share in CJSC “R-Telecom”. Consolidation of assets was planned before company’s IPO.
Source: Kommersant (Perm) № 41 (3858) from 14.03.2008

In 2010 Lukoil decided to finance the project of reconstruction and construction of a new stage in Perm opera and ballet theatre. Lukoils involvement was Kuziaev’s personal initiative.
Source: Kommersant (Perm) № 42 (4340) from 12.03.2010

New director of Perm opera and ballet theatre was appointed Anatoliy Pichkalev, who managed it already in 90-th, than worked in PFIG and Lukoil’s structures. Thereby, Kuziaev’s prot?g? would control the reconstruction and development project.
Source: Kommersant (Perm) № 146 (4444) from 12.08.2010

Journalists wrote that Kuziaev intended to participate in co-financing of the Rosnano project of establishing nanotechnological centers. Basic platforms should become PFIG and OJSC “Morion”.
Source: Kommersant (Perm) № 44 (4342) from 16.03.2010

Perm Vice governor Nikita Belikh owed Kuziaev in his career. Kuziaev noticed Belikh when he studied in his last years, and after graduation appointed him Vice-president of PFIG. In two years Belikh became CEO of PFIG.
Source: "Moscow news" from 27.05.2005