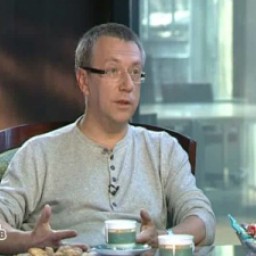 Andrey Vavilov (born 10 January 1961, Perm) graduated from the Moscow Institute of Management in 1982. He did his postgraduate research at the same academic institution. He obtained PhD in economics in 1985.

1985-1988 engineer, junior researcher at the Central Economics and Mathematics Institute of the Academy of Sciences of the USSR

While working in the institute he met Egor Gaidar, architect of Yeltsin’s economic reforms.

In July-August 1990 he took part in developing so-called “500 days” program – the scheme of the country’s step-by-step transition into market economy. It was not implemented. The program was developed by a team of economists, led by academician Stanislav Shatalin and head of the Composite Department for Economy of the council of ministers of the USSR Grigory Yavlinsky (since 1995 – leader of Yabloko political party)

1991-1992 researcher at the Peterson Institute for International Economics (Washington, USA)

On 7 December 1996 he was appointed member of the board of ORTV Closed JSC (Russian main TV channel) and became first deputy chairman of the board.

Late in 1996 he set up the Institute for Financial Studies, which gathered a team of independent economists.

Spring 1997 deputy chairman of the board in International Finance Company (IFC) Bank, responsible for global financial operations of the bank

2002-2010 member of the Federation Council (upper chamber of the Russian parliament), representing legislative body of the Penza Region

He has over 20 publications. He coauthored, together with Oleg Vyugin, the book titled   Тrаdе Patterns in thе Fоrmеr Sоviеt Uniоn. Fivе Yеаrs Роliсу Ехреriеnсе аnd thе Futurе, published in the USA in 1997. Oleg Vyugin was an officer in the finance ministry in 1993-1999. He has chaired the Federal Service for Financial Markets since 2004.

In 2000 the portraits of Mariana Tsaregradskaya, former actress of Lenkom theatre, appeared on numerous billboards across Moscow. The inscription ran “Hi, Mariana!” and “I love you”. This “advertising” campaign cost Vavilov $160,000; he wanted to reconcile with wife. With the goal reached, Mariana gave birth to their daughter Goya-Vivienne in 2005.

In November-December 1995 Vavilov, acting in the name of the Finance Ministry, signed approval papers for “loans-for-shares” privatization scheme. It was the largest fraudulent scheme that enabled to transfer state-owned companies (oil-and-gas, metallurgy and others) to private business. Vavilov was close to Vladimir Potanin, head of Onexim bank and mastermind of the scheme. Later Vavilov claimed that it was deputy finance minister Andrey Kuzmin who was in charge of this privatization scheme, whereas Vavilov just “signed papers”. But the privatization contracts were endorsed with the stamps of the government and approved by the State Committee for State Property Maintenance.

In May 1996 Boris Eltsin appointed Vavilov his campaign finance manager during the election campaign. The same month a group of anonymous journalists, called Soglasiye (Concord), sent faxes from the Central post office in Moscow to leading newspapers and members of the State Dum. This faxes contained information about Vavilov’s financial machinations and his multimillion wealth. Aleksandr Lebedev and Oleg Boiko, co-owners of National Reserve Bank, were mentioned as Vavilov’s associates. They worked together on carrying out alleged fraud and stealing millions of state funds.

In April 1997 Vavilov gave testimony in the case embezzling $231m of state credit that the government extended to MiG aircraft corporation. The credit was governmental support for building battle planes for India. In 2000 the case was dismissed, due to the lack of evidence of crime.

Chairman of the board of Severnaya Neft Vavilov embarked on an addition issue of shares that resulted in reduction of LUKoil’s stake in the company to just 5%. Due to the actions of the former deputy finance minister, LUKoil lsot control over Severnaya Neft. As of 2004, Vavilov’s stake in Severnays Neft was 55%. Aleksandr Samusev, former vice president of Yukos company and director general of Severnaya Neft, had 20% of shares of the company. In 2000-2003 LUKoil, dissatisfied with unjust redistribution of shares, filed a number of lawsuits against Severnaya Neft in the arbitration courts, but lost all of them. LUKoil also tried to obtain the right to exploit Val Gamburtseva oil field (Severnaya Neft won the license to use the field in 2001), but its appeal to the Ministry of Natural Resources proved unsuccessful.

On 28 May 2001 Vavilov was summoned to the Prosecutor General's office, where he was presented with the files of the criminal case against him. Vavilov was accused of the privatisation scam. In December 1995 the government put state-owned Sibneft oil company up to loans-for-shares auction. Just before the auction, Vavilov had ordered to put large sums of  state budget money to the accounts of banks that surprisingly became winners of the auction. Vavilov was also involved in another scam. He was in charge of offsetting debts between Russian finance ministry, defence ministry and Ukrain's Unified Energy Systems company. In the end, Russian side received $330m worth construction materials less. In April 2002 military finance chief General Grigory Oleynik was convicted for that offence, but in November 2003 the Supreme Court freed him of all charges, ruling that Oleynik had just followed the orders of his superiors - Vavilov and defence minister Igor Rodionov.

After interrogation Vavilov was unwell and had to undergo hospital treatment. In June Vavilov’s case was dropped.

In January 2007 prosecutors reopened the credit-for-MiG embezzlement case. This time the prosecutors accused Vavilov of abuse of power and large-scale fraud. On 10 January the Supreme Court ruled that there was evidence of crime in Vavilov's actions. But, being a member of the parliament, he had immunity from prosecution. He denied he was guilty. On 26 January Mikhail Kasyanov, former prime minister, who had worked with Vavilov in the finance ministry, gave testimony about the credit.

In July 2011 it was reported, that research group of the faculty of chemistry of the Moscow State University developed a groundbreaking technology of production of high-temperature superconductors. First samples of Russian superconductors have the same quality as their Western counterparts, but they are much cheaper. Vavilov, founder of charitable organisation called Potential of Science and owner of SuperOks high-tech company, was said to donate to the project.