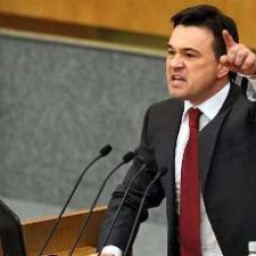 In 2011, he was elected Deputy of the State Duma of the Russian Federation of the 6th convocation.
On February 11, 2012, he reported that he left his post. According to him, he resigned from the party post to concentrate on his work in the Duma.
Honors
Order of Honour (2010)
First Class Medal of the Order of Merit for the Motherland (2007)
Glory of Adygea Medal (2007)

Until 2002, Vorobiev was the owner and CEO of the Russian Sea JSC, as well as one of the founders of the group of companies with the same name - one of the largest retailers of fish and seafood in Russia. At the market, the Russian Sea can be for sure referred to as the property of the Vorobievs family, that is - of the two brothers and their father.

On the eve of the Christmas holidays in 2009, there were rumors that an unofficial order allegedly came from the White House that it would unwelcomed for officials to be seen at the elite Alpine resorts. However, officials still took holidays there but reacted nervously if there was special attention to them. It seemed that the statesmen with pleasure would go to restaurants in ski helmets and masks as well. As for the Head of the CEC of the United Russia Andrey Vorobyov, as soon as he realized that he had been recognized, he tried to hide.

The February of 2009 turned out to be extremely hot for Vorobyov. A month before the election of the Mayor of Murmansk, there was a disagreement in the party ranks: Governor Yury Yevdokimov refused to support a party creature of Mikhail Savchenko and took the side of non-party Sergey Subbotin, who then eventually won the second round. “For such actions, we will exclude members of the party from our ranks without regret”, Vorobyov, supported by the Kremlin curator of the regional elections Vladislav Surkov, threatened the governor. Evdokimov wrote a letter of voluntary resignation from his post of Governor, and Dmitry Medvedev accepted it. The Kremlin did not hide the fact that the decision of the President had been influenced by the situation with the election.


An elite matchmaker Olga Slutsker had a particularly close relationship with Andrey Vorobiev. It was no secret to inhabitants of the State Duma that he actively offered “stars” supplied by Olga to the “fathers of the nation”, including immediate environment of the Premier and the President. It gave the effect – the career of Vorobyov was developing rapidly.
Under Andrey Vorobyov’s guidance, Mrs. Slutsker entered the United Russia, received the proper number of votes at the party primaries of candidates to the State Duma and became coordinator of all the sports program of the party of power.
Moreover, the World Class won a contract on retraining of teachers of physical education to fitness and aerobics. In addition, the Glavstroy SPB company, owned by Slutsker together with Maxim Vorobiev and Oleg Deripaska, turned the city of Petersburg literally upside down. The owners together with its affiliated companies built 462 parking lots, renovated 22 neighborhoods, built theTheatre of Alla Pugacheva, and reequipped Apraksin Dvor in St. Petersburg.


Vorobyev is famous in the city for numerous scandals - from a vulgar skyscraper of the name of Alla Pugacheva, caused the rage of the citizens, to the failure of the project on reconstruction of slums between Shkapin and Rosenstein streets, where after bandit raids and cleaning-up the area from competitors, nothing has been seen but wastelands and ruins.

After Vorobyov had failed the elections of his own party and was fired, friends of the retiree around President Medvedev firmly employed him to head the United Russia faction in the State Duma.
Vorobyev's family has long specialized in the capitalization of state decisions. Possessing insider information and right connections, these people sell officials’ signatures, right up to the Head of the Russian Federation - the state policy turns into personal money through simple machinations. One of the latest events of this kind was the recent resignation of the governor of Primorye Territory Sergey Darkin.
The Russian Sea group controlled by Vorobiev bought assets of Darkin’s wife - Nakhodkinskaya baza aktivnogo morskogo rybolovstva JSC (Nakhodka Active Marine Fishery Base). It is a question of $250-300 million. “It’s very likely that there haven’t been transactions of such magnitude yet”, a source close to the Russian Sea shareholders says.