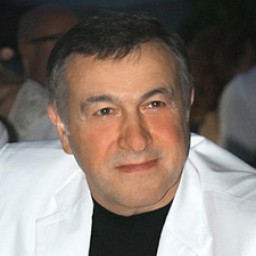 Aras Agalarov was born Nov. 8, 1955 in Baku.
In 1977 he graduated from Baku Polytechnic Institute majoring in Computer Engineering.  From 1977 to 1983 he worked at a research institute in Baku, then in the Baku city committee of trade unions. From 1983 to 1987 he attended the Higher School of a Trade Union movement called All-Union Central Council of Trade-Unions (‘VCSPC’) (now - the Academy of Labor and Social Relations) in Moscow. From 1988 to 1990 - Agalarov worked at the Scientific Center for Trade Unions as a junior researcher. He defended his thesis on "Formation and use of the payroll by the example of a telecommunication agency."
Agalarov is President of Crocus Group and the Krasnogorsk Branch of Crocus City, Chairman of CB Crocus Bank, Chairman of the board of directors of "Kroteks" (a chain of hypermarkets "Tvoy Dom"). Part of his business empire is the Crocus City Mall, which has an area of 62,000 m ?, as well as retailer chain Crocus Moscow.
Agalarov takes great interest in social work, he is a Vice-president of the All-Russian Public Organization of Small and Medium Enterprises "Support of Russia", the organizer and president of the Union of Manufacturers and Importers, a board member of the Russian Union of Industrialists and Entrepreneurs and vice president of the All-Russian Azerbaijani Congress.
Married with two children; His son Amin is a businessman, commercial director of Crocus Group; married to the daughter of the President of Azerbaijan, Leyla Aliyeva; and his daughter Sheila is a student at Fashion Institute of Technology, NYC, USA.
In 1997 he built the famous luxury 34-apartment complex «Agalarov House», located in one of the most prestigious districts of Moscow, at the intersection of Bolshaya Gruzinskaya Street and Klimashkina Street.
In May 2009, Agalarov received the Order of Merit of the Italian Republic (OMRI) for his significant contribution to the history of the development of economic relations between Russia and Italy.
In the ranking of the top leaders - 2010 by the Kommersant Newspaper he took the first place in the category "Trading".
Commander of the Order of Merit of the Italian Republic (Italy, December 27, 2008).
Source: Wikipedia