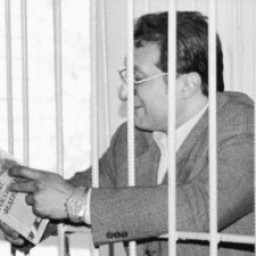 In the beginning of 90s he was the companion of Ilya Medkov, with whom he established several firms, incorporated under the name “Pragma”. In 1992 Angelevich and Medkov divided business between themselves. Angelevich’s trade company “Pragma” became the importer of Gillette products.

Till 1999 - chairman of board of Joint-stock bank “Montazhspecbank”.

Early in life Angelevich together with two mates of him, Dmitriy Bureichenko and Ilya Medkov, set up the company “Pragma”, having done the capital on computer selling.

Earlier, in 1992 Angelevich together with Medkov established the Center of human genetic information, one of the first sperm bank in Russia. It was bought cheap, but in documents sums were much higher.

Earlier “Pragma” Medkov worked in “Istok”, which deceived it’s depositors, holders of “Rossiya” cheques.  Bank “DIAM”, which were managed personally be Medkov, was implicated in theft of state funds buy cashing of the same cheques. After working with Angelevich for some time Medkov quarreled with him and wanted even to bring an action against him for theft of a big amount of money against faked documents. Soon Medkov was murdered. The administrator of his estate was for some reason appointed Angelevich.

After Medkov’s death “Montazhspecbank” got under management of Bureichenko and Angelevich. Bureichenko soon placed himself in the head of “Edinstvo”. The two banks were in partnership relations. However, in the middle of 1995 business of “Edinstvo” was not looking well. Bureichenko began deceiving creditors.

Later Angelevich fell out with Bureichenko. Together they participated in money theft from “Pragmabank” and “Edinstvo”, but the major part got Angelevich.  Bureichenko was also going to bring an action against Angelevich, but in the end of 1995 he disappeared. Probably he just left Russia. Before disappearing Bureichenko took big amount of obligations and sold the premises of “Edinstvo”. The mansion was bought by a person, who was given money by Angelevich. Thereby, Angelevich began administrating the estate of disappeared Bureichenko.

Legal proceeding was initiated against Bureichenko on the theft of 200 million dollars. It became known that in 1991 Bureichenko became chairman of board in “Pragmabank”, then in “Edinstvo”, where took place the thefts.

In 1997 was murdered the head of Moscow production complex of auto service Vladimir Monakhov. He was shot nearby his own cottage when he was going back home together with his daughter. Monakhov controlled a chain of gasoline stations and his business was going well.  However, it was known, that before death he tried to break relations with Angelevich’s “Dana Petrolium”.

In 1995 Montazhspecbank transferred to “Public fund for defending of civil rights”, headed by the assistant of Valentin Kovalev, Andrey Maksimov, 300 hundred dollars. The money was transferred to Cyprus and disappeared. Most likely, that was payment for some services.

In June 1998 Maksimov was arrested. It became known, that for the authorized purposes went only 10% of the transferred amount. The rest was spent for trips and expensive real estate. Kovalev was arrested next.

The key part of Angelevich’s and Bureichenko’s fraud was the following. Obligations were issued by “Edinstvo” for international trade organizations, and then the bank reregistered them as the pledge to “Intarex”, which sold them to foreigners.

One of “Edinstvo” creditors – Daughter Company of “Gazprom”, “Gazenergoservice”, brought an action against Bureichenko on the fact of fraud.

In course of the investigation it was established that the holders of “Edinstvo” shares were well known companies and banks: Salomon Brothers, CS First Boston and others. They were released and left for their new owners. With the lapse of time it was gathered enough evidence for arrest of Angelevich.

There were three versions for arrest of Angelevich. According to one of them he was detained nearby his house, according to another – in the premises of Investigative committee, where he was invited as a witness. According to the third - on the boarding bridge of the airport when he tried to leave to Israel.

During the search in Angelevich’s cottage was found a tape with recordings of Minister of Justice, Valentin Kovalev, in sauna with naked women. Angelevich, most probably, hoped to exchange the tape for his freedom in case of problems with the law.

However he didn’t succeed to use the compromising. In April 1997 Angelevich was detained on a charge of theft of 7 million US dollars. He was suspected of money capture of “Edinstvo” in collusion with group of people, including his companion Bureichenko. Stolen money they issued as unpaid credits in currency.  While search in Angelevich’s cottage was also found a big sum of money, many travel passports, Israel and German passports and tickets to London. Besides, was found a file under the name “Case”, where he wrote his criminal case destruction plan. In the list there were people he was going to blackmail in exchange for help in defending him.

Some of them really tried to defend Angelevich, and also Boris Berezovskiy, who was not in the list. Five lawyers worked for Angelevich at the same time, one of them was Henry Pavda. Speculations were rife that Angelevich also counted on help of “Solntsev” criminal group, because he knew their leader Mikhas.

In the moment of Angelevich’s arrest was also confiscated certificate of Minister’s counselor Kovalev.

Among the assistants of Angelevich was also Vladimir Vanesyan, who, being an officer in Lubyanka, work as an Economical Security Manager in “Montazhspecbank”. They said that he even organized taping of telephone talks by operational investigative group of Ministry of Internal Affairs.

On a day of arrest colleagues of Angelevich stood up for him by spreading a letter of protest from members of Association of Russian banks.

In July 1997 in a TV program “Itogi” the Head of Investigative committee of Ministry of Internal Affairs Igor Kozhevnikov called Angelevich “thief, fraudster and criminal”.  Angelevich brought an action with the demand for moral compensation. Besides, Angelevich, being disappointed by that program, made a suicide attempt: cut veins on one hand. But he was not let to bleed. All those actions were done to pass the case for consideration in General Prosecutor’s office and release Angelevich from prison. They kept on stand for Angelevich but nothing helped.

The lawyer of Angelevich, Alexander Asnis, wrote also to Skuratov that “Montazhspecbank” supposedly was forced to pay 900 thousand dollars to JSC “Proktorg”, and from Angelevich’s sister, Henrietta, close to investigation people extorted 100 thousand dollars from her, and she gave.

Approximately at the same time Angelevich’s lawyer Anna Bochko came to him. She was searched, taken away an envelope with a letter from Angelevich’s wife, where she informed about baby birth. She tried to prevent the search and was beaten.

Investigators were tough with the employees of “Montazhspecbank”. The manager of the bank, Peter Ivanov, was questioned till night. That questioning the bankers tried to offer as an attempt to press on a deal for benefit of JSC “Prokat”. Ivanov was persuaded to conclude the agreement to buy from the company by “Montazhspecbank” the right to claim money from “Edinstvo”. Thereby, it was found indirect evidence that “Montazhspecbank” was the debtor of “Edinstvo” and “Proktorg”.

The employees of “Montazhspecbank” were detained by people in masks with guns, burst into the bank. Then was started the search till 8 o’clock in the evening. Operational hall was closed, the bank couldn’t work.

After arrest of Angelevich, Deputy Victor Kornienko sent to General Prosecutor Yuriy Skuratov a telegram, informing about violations of Angelevich’s rights in prison. He decided to run for Moscow City Duma but his application was not delivered, and he didn’t get to the list of candidates. However in prison they said that the application was sent and most probably it was the fault of the post.

Soon in prison Angelevich was identified a severe heart, liver, kidneys and stomach diseases.  He also suffered from neurasthenia.

In 1998 on suspicious of murder of Monakhov was arrested one of Mozhaiskaya criminal group leaders, Sergey Primak (Tayson), who was a front for Angelevich. Monakhov’s daughter recognized him as the murderer. Primak got to the same prison cell with Angelevich, but that didn’t help – nobody admitted guilt of Angelevich’s murder.

In process of the investigation of Angelevich’s case all well-known lawyers, including Pavda, quitted the case, such a capricious proved to be their client.

In 1998 the investigation of the case was completed and Angelevich began to study the materials of the case, copying carefully all 40 toms.

After the complaint about violation of Angelevich’s rights it was carried out a check in prison, in process of which there were found much food, leisure stuff and mini swimming pool in the cell of Angelevich.

In 2000 Angelevich was sentenced to 4 years of imprisonment, but right away released because more than 3 years he already spent in prison, besides, he got under amnesty. He was released in a courtroom.

Angelevich was accused for many episodes. For example, in 1996 “Lotrek” and “Detra” were debtors of “Montazhspecstroy” and became bankrupt, after that passed their property, including a cottage of their Director Kenzhuk, to Angelevich. The facilities under assignment agreement were supposed to be passed to “Edinstvo”, but that didn’t happen.

Besides, Angelevich got from another debtor, “Tesler-trading”, 200 thousand dollars and kept them for himself.

It was also known that in 1995 Angelevich misappropriated the receipts in the amount of 6 billion of old rubles from sale of 50 Kia cars, sold as a secure for loan by joint venture “Norphis”.

The court excluded from accusation many episodes, considering them unproved. There left only Kenzhuk’s cottage, for which he got the whole term.

After release law enforcement authorities of other countries kept their eye on Angelevich.  Thus, in  France Angelevich brought money for purchasing of villa by Israel passport. At the same time he owned real estate in Germany by Russian passport, having residence permit in Germany. There he announced about theft of valuables from his house, which were insured. Later they were found in his house in Russia during search.

Besides, it was found out that Angelevich got also Greek passport.