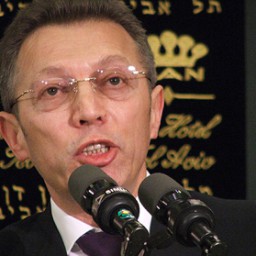 Born in Moscow. In 1972 immigrated to Israel.

For some time he lived in a kibbutz, then served in the Israeli Navy.

In 1973, upon completion the service he moved to France, where in 1976 he created a translation bureau primarily oriented to the Soviet missions. In 1982 he also established a branch in Canada.

In the 1980's he established relationships with the Angolan Government, and sold it weapons for fighting rebels, despite an international embargo. When the Soviet Union collapse he started investing in various projects at the post-Soviet territory.

In 2000 he was indicted for illegal arms sales to Angola. On this reason he escaped from France to Israel where he bought an apartment in Caesarea. Israel refused to extradite Gaydamak to France.

In Israel he acquired a number of companies and sports teams such as: Jerusalem FC «Beitar», the basketball team «Hapoel Upper Galilee».

In 2005 his name appeared in the reports of the Israeli police investigation of money laundering through the Bank «Hapoalim».

In 2006, Gaydamak bought the newspaper «Moscow News»; its publication had been suspended since January 1, 2008, and the employees of the newspaper were dismissed due to unprofitable publications.

In March 2007 he was formally accused by the General Prosecutor of France of illegal weapons supply to Angola and corruption. He was accused along with some former high-ranking French officials.

He is the owner of Media Holding "United Media» which involves radio stations such as Cinema FM (Moscow), as well as an extremely popular radio project Business FM (Moscow, St. Petersburg) and the Newspaper Business and Financial Markets.

Gaydamak participates in internal politics of Israel; he founded a movement "Social Justice".

According to press reports, he provides financial assistance to the transfer of the St. Sergius monastery building in the center of Jerusalem to the Imperial Orthodox Palestinian Society.

July 30, 2008 he officially declared his candidacy for mayor of Jerusalem, but lost.
Source: www.nudecelebs.ru

Gaydamak is a collector: he owns a large collection of Empire style. In addition, he is the author of the book "The Russian Empire" (2000). Gaydamak is known as a major sponsor of the Jewish community in Russia. In May 2005 he was elected president of the Congress of Jewish Religious Organizations and Associations of the country (KEROOR) [33].

Gaydamak was awarded the highest order of France- the Order of the Legion of Honor for saving two French pilots from the Bosnian captivity in 1995.

Gaydamak - a citizen of several countries - Angola, Israel, Canada and France. He does not have Russian citizenship. In recent years (since 2002) Gaydamak has been residing in Moscow.

I Gaydamak has a son and two daughters. In 2006, Alexander Gaydamak, the son of the businessman became the sole owner of English football club «Portsmouth».
Source: www.lenta.ru

Gaydamak's name appears in the media in connection with major financial scandals. The first one involved participation of some private companies in the debt repayment of Angola to Russia between 1996 and 2000.

In late 1996, Russia and Angola signed an agreement on debt restructuring under which 70% of the debt was simply dismissed, and the rest part of it (at 1.5 billion dollars) was restructured in bills which were to be repaid over 21 years.
Source: "Le Monde" from 03.04.2002

"Debt restructuring" and the further profit earning by stakeholders was executed as follows: Creditor country sold a bad debt with a large discount to the company specialized in such operations; the company recovered from the country-debtor the full amount or the biggest part of the debt. Managers of the indebted party also got commission. To avoid paying to middlemen, the debtor and the creditor created a fictitious company which supposedly received the debt.

An offshore company Abalone Investment Limited became such a company; in spring of 1997, it was established by Gaydamak, a French businessman Pierre Falcone, and the president of the Bank «Russian credit» Vitaly Malkin. Angolan money should have been credited through that company to the account of the Ministry of Finance in Russian "Unicombank».

As a result, Russia gained only a small portion of the amount expected, the remaining funds "settled" in the "Abalone". In the period between July 1997 and July 2000 only two transfers had been revealed on account of the Ministry of Finance . At the same time Abalone transferred money to five other companies in Israel, Luxembourg and Cyprus. According to Gaydamak, they were supposed to buy the Russian bonds.
Source: "Top Secret" from 08.2002

Gaydamak also became involved in the loud story of French corruption case, known as "Angolagate" on the sale of Russian arms to Angola, due to which France gained access to oil resources of Angola.

Angolan President Edward Dush Santush badly needed weapons to crush the rebels - a union UNITA under the leadership of Jonas Savimbi. Initially, France supported UNITA. But then the United States started supporting the union, and it became clear to the French government that the contracts for the supply of oil could have been acquired by a stronger opponent. Thus, when Dos Santos asked for help in supplying weapons – France found a way out. There was one complication: open help with weapon to African countries was banned by international agreement. Gaydamak came in handy then.

In 1993, the eldest son of French President Mitteran Jean-Christophe (he headed the department of African countries), French Interior Minister Charles Pasqua, and a Franco-Brazilian businessman Falcon (ex-business partner of Gaydamak) turned to Gaydamak to organize the sale of arms to Angola.

Gaydamak sold the first batch of Russian arms to Angola through the Slovak company ZTS Osol; perhaps, he used his old channels in KGB on Soviet arms supplies through Czechoslovakia. Angola had been delivered weapons at 630 million U.S. dollars within two years . Almost all the participants of the operation received a considerable profit. Angola received weapons and France - the oil contracts and the most spectacular corruption scandal in its history.

in 1996 Gaydamak was awarded one of the highest awards of France - the Order of Merit for a successfully implemented deal; while for a decoration he was granted on a special list of President Chirac for success in the meat trade with Russia.
Source: "Stringer" on 11/04/2001

In December 2000 the French justice began investigating the case on supplies of weapons to Angola; Gaydamak left the country and settled in Israel. He was put on the wanted list by Interpol as one of the defendants in the case, but they failed to arrest him.

In early October 2009, the Israeli prosecution filed charges against Gaydamak in absentia of laundering 650 million shekels. At that time Gaydamak was in Russia.

It all started from the year 2005 - then 22 employees suspected of money laundering operations were arrested in the Tel Aviv branch of the Israeli bank «Hapoliam». Among the clients of the bank Gaydamak was listed. The bank employees had been receiving large sums of money of dubious origin from the clients abroad . The same money when laundered through a legitimate bank account was transferred to another country, mostly - in the «Hapoalim» branches in Western Europe.
Source: "Gazeta" on 08.03.2005

Along with prosecution of money laundering the French court found Gaydamak guilty of illegal arms shipments to Angola. He and Falcone were sentenced to six years of imprisonment. Jean-Christophe Mitterrand was sentenced for 2 years of probation and fined. Gaydamak appealed the court's decision.
Source: www.lenta.ru

Gaydamak was in Moscow when the charge had been filed. He was scheduled to go on trial on February 18, 2010 in Tel Aviv. The trial was supposed to be held earlier, but the businessman asked for a postponement pointing out that the doctors had forbidden any flights to him.
Source: izrus.co.il on 05.01.2010 09:23

Even before the designated trial the Israeli prosecutor demanded to arrest Gaydamak referring to the fact that he had not made a part of the bale.
Source: izrus.co.il on 05.02.2010 09:19

However, on 18 February the court did not yet begin, as the procuracy replaced the prosecutor. The chief prosecutor in the case of money laundering Tali Nazhari was removed from his post. He was replaced by another lawyer.
Source: izrus.co.il on 18.02.2010 19:52

On February 28, 2010 Gaydamak appealed against the court decision not to cancel the bail of $ 3 million as a guarantee of his arrival at the court session . The deposit was several times more than the highest amount ever made in such cases in Israel. The businessman has not yet provided any evidence of his financial insolvency.
Source: izrus.co.il on 28.02.2010 18:55