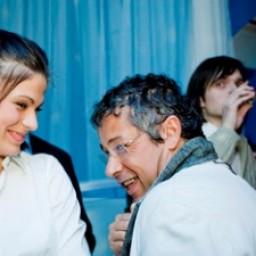 Arkady Teplitsky was born on 17 July  1964  in Leningrad. He graduated from Obraztsov   Railway Engineers' Training School in Leningrad.
In 1985-1990 he worked at stearin candles production cooperative.
In 1992-1993 he was a co-owner of a large fair trade in Sports and Concerts Complex, St. Petersburg.
In 1993 became a co-founder of   Adamant company  engaged in  construction and maintenance of  trading complexes. He specialized in restaurants.
In 2011 Teplitsky's wealth was estimated at 300 million dollars.
Source :   website of the World Club of St. Petersburg citizens, celebrities,
Delovoy Petersburg, 17 December 2009, Finance, 25 February 2011

Teplitsky admitted that he and  his partner  were united by ''Jewish soul'' which allowed them to keep a constant part of the company since 1993. As Teplitsky   said, ''because the Jewish soul also implies some moral and ethical qualities trained by parents and traditions''. To maintain ''the Jewish soul'' Teplitsky managed  to come to an agreement with a Jewish religious organization which allowed him to have a small office at the Hasidic canteen  in front of the Wailing Wall   where palmers could have free meals. For the right to have an office Teplitsky  had to maintain the canteen. People from different cities of Russia sent messages   to Teplitsky's office. Texts of the messages were displayed on a big screen set in front of the Wailing Wall. Then the messages were printed out, and every morning a rabbi took the notes and put them into the Wall. But Teplitsky received not that many messages and after 5 or 6 months it became clear the project was getting too expensive. However,  Teplitsky  said that it had been a great pleasure, ''although the money was lost ''.

On 22  January  2009  imprisonment term of  Mikhail Mirilashvili also known as Misha Kutaisi, the owner of  Petromir  charged with kidnapping people, expired. While Miriashvili was in prison his business did not suffered much, while his financial position  even got better,  not least owing to Teplitsky. He commented on Mirilashvili's discharge '' Mikhail Mirilashvili's  business  is absolutely OK. A strong team of his friends and partners not only retained it but also expanded.

Teplitsky and other co-owners of  Domovoy retail network  owed to major developer Viktor Surkov rent money for 3.3 thousands of square metres for Domovoy hypermarket of household goods in Megacity mall in Samara. In 2007 the companies signed a contract for 10 years. However, a year later Domovoy met financial troubles. By   April 2009, when  Viktor Surkov  applied to the Court of Arbitration in the Samara Region, the debt had been almost 9 million rubles. Cosidering the penalty and operating expenses, in spring 2011 the debt reached 45 million rubles. On 11 March  2011 former owner of Domovoy Teplitsky was reported  to sell the failed project to another  chain of stores in St. Petersburg, Na Start. According to different sources, Arkady Teplitsky and his Adamant got from 10 to 50 million dollars for Domovoy. Viktor Surkov foresaw the turn of events and repeatedly tried to get claim security:  several times he demanded arrest of Domovoy's accounts  and ban on using the trademark. But his applications  were never accepted by court.