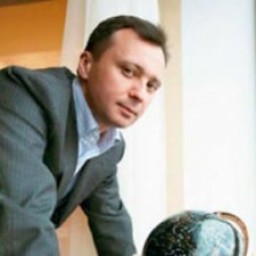 • 1994-present time: «Corporation Stroimontazh", co-owner, president;
• 1991-1992: Russia's armed forces.
In addition
• Author of "Marketing in Construction Company (2002);
• Married. Son and daughter;
• He is fond of sports and enjoys outdoor activities, travel;
• Member of the Advisory Council on Urban Development under the Government of St. Petersburg Council of the Association "Construction and Industrial Complex of North-West."
Source: rb.ru

In 1994 Kirilenko, along with Sergei Polonsky founded Stroymontazh in St. Petersburg Corporation. First, they took small contracts for finishing work for which migrant workers had been hired from Ukraine, and then engaged in property development.

In 1995 construction began on the first object; that was a residential building in Vsevolozhsk district of Leningrad region. The company developed rapidly, despite the fact that Kirilenko and Polonsky started out as a unknown 22-year young people.Perhaps many victories on the construction tenders were due to the fact that they had been noticed by someone in the administration and used it as a cover for their business. There have been rumors about the friendship of Kirilenko and Sergei Matvienko, son of the governor of St. Petersburg Valentina Matvienko, as well as the connections with criminal circles.

In 2000, the branch of Stroymontazh was opened in Moscow in which 50% of the shares were owned by Kirilenko and Polonsky.
Source: solomin from 27.11.2009

In 2001, the company Stroymontazh and «Stroykontinent XXI Century» challenged each other's right to build residential complex " Gold keys-2 " in Moscow. In August 2000, a contract was concluded on complex construction between the client of the construction company "Obnovlenie plus" and "Stroykontinent XXI Century", a subsidiary of the St. Petersburg company "RosglavmaterialyЭ (RGM). "Stroykontinent" was supposed to get 80% of the housing. But Stroykontinet, started the works and failed to pay money for the lease of the site. There was a threat of termination. Therefore, in 2001 it was decided to conclude an agreement with constructor Stroymontazh. But the old contract at that time had not terminated and their work had not been paid. From May to August 2001 "Stroykontinent filed several lawsuits in court, having achieved the arrest and a ban on construction work at the site. But in October, the court lifted the arrest and arrested the RGM funds to the amount at which Stroymontazh estimated their losses associated with downtime. At the moment RGM had serious problems, and the company offered Stroymontazh all property of ZAO «Stroykontinent XXI Century". But Kirilenko disagreed, deciding to still obtain compensation for damages through the court.

In early 2006, Kirilenko and Polonsky shared the business: Kirilenko was the owner of Stroymontazh where Polonsky owned 10%, and Polonsky registered in Moscow the new name of the firm Mirax Group, in which 10% belonged to Kirilenko. Now they had different firms.

In 2008 Stroymontazh took 10% of the urban construction market, after which the company immediately started having problems.

Back in 2006-2007, Stroymontazh delayed the commissioning of residential buildings on one or two years. The debts to interest-holders and creditors grew up .With the onset of the crisis in Russia, housing prices began to fall. Lenders began to worry about debt repayment. At this time a strange request appeared from the Cyprus offshore company "Kosmogrup Vorlvayd Limited to acquire 93.83% of OOO Stroymontazh Corporation, parent company of the group. In Stroymontazh excused with planned restructuring, but it looked like attempting to display the company's assets.

In December 2008, Stroymontazh let a technical default on the bonds happen by paying creditors a with a week delay. The company was filed claims on early collection of debt from counterparties. Kirilenko admitted that at that time the company's debts to the creditor banks - Sberbank, Bank Saint Petersburg ", Rosbank Baltic Bank and Alpha Bank - accounted for 6.1 billion rubles. Debts owed to the co-investors were estimated at 17 billion rubles.

In March 2009, they reported about the mass layoffs in Stroymontazh - 50 stayed out of 500 employees. In June, the company failed to timely pay a coupon of its bonds.
Source: solomin from 27.11.2009

In mid-March 2009 Communication-bank filed a lawsuit demanding to recover money on the loan from Stroymontazh.
Source: Kommersant Saint-Petersburg № 61 (4116) from 07.04.2009

In April Stroymontazh expressed their intention to seek a court extension of credit performance of obligations to the Baltic Bank, filing a claim in arbitration. In lawsuits Kirilenko referred to the words of President Dmitry Medvedev on the avoidance of a situation where a credit institution is able to stop the work of a large holding. The bank took this action as a misunderstanding.
Source: Kommersant Saint-Petersburg № 65 / P (4120) on 13/04/2009

In June 2009, the Petrograd District Court granted the two lawsuits by Baltic Bank to Kirilenko at 715.4 and 251.9 million rubles. Earlier, in January 2009 the Bank opened a credit line for Stroymontazh; guarantee agreement was to be concluded with the very Kirilenko. Another line was opened for OOO "KosMonblan», it was engaged in the construction of" Mont Blanc ", the surety was Kirilenko again.

Baltic bank tried to recover loans through arbitration. In April 2009, he won a lawsuit to pay 715 million rubles and in May - at 215 million. To expedite the refund, the bank sued personally for Kirilenko. This claim was later also satisfied in favor of the Baltic Bank.

Kirilenko told the media that he had never denied his debt and was about to return everything.
Source: Vedomosti on 06/10/2009

But the creditors of the company could not claim Kirilenko personally so easily. In early 2009, he liquidated the company "European Centre for Development and Construction" (ECDC), which owned company Stroymontazh, which belonged to the LLC “Petrovsky Port”, which, in turn, was owned by Kirilenko. Then 99% of the corporation started to belong to proficient offshore Flaton Holding Ltd, and Kirilenko had 1% left.
Source: "Delovoy Petersburg" on 07/23/2010

In June 2009 the Court granted the petition by Baltic Bank for the recovery of 1 billion rubles with Kirilenko. When they had known that officially Kirilenko had no personal property, all the assets of Stroymontazh were laid down to other banks.

Then the company passed the last house, and completely fulfilled its obligations to customers. the company could not start new projects because of the inherent parts of other banks.
Source: Kommersant Saint-Petersburg № 103 (4158) on 06/10/2009

Lawyers believed that collect funds from an offshore company was practically impossible, as legal entities that are registered in the offshore do not disclose their respective owners. Bank will be able to impose punishment only for the property which Kirilenko might have in the future.

Baltic Bank made an unprecedented proposal to creditors and subcontractors of Stroymontazh: it promised a reward for additional information on retired assets of Kirilenko.The bank was even ready to share this information for free with other lenders.
Source: Kommersant Saint-Petersburg № 173 (4228) on 09/18/2009

Stroymontazh found a contract financing construction of "Mont Blanc" by Kosmonblan" not concluded in court, and right for it went to Stroymontazh.Then Stroymontazh sued for their own bankruptcy, and in November 2009, the court imposed in the external management entity. And in 2010 KosMonblan. was recognized a bankrupt
Source: Vedomosti on 07/26/2010

Consequently, "KosMonblan" could not claim for commercial space in the complex, hence, Baltic Bank could not get them.
Source: Fontanka.Ru on 03/02/2010

Nevertheless, the absence of a treaty has not prevented Kirilenko to propose to the bank in arrears of Stroymontazh to take "Mont Blanc ", but the bank did not agree.
Source: Lenta.Ru on 23/07/2010

Stroymontazh stated that they managed to agree with all the other creditor banks on debt restructuring.
Source: "Kommersant" dated 07/09/2009

Attention of Baltic Bank was also drawn by two transactions carried out by Stroymontazh: in December 2008 and February 2009, the company sold two land plots on Robespierre Shore front, and on Vyazov street at very low prices. The new owners were "First Project Company" and "Investhaus”. Equity holders were forced to restructure the contract for "the First Project Company." Lenders feared the withdrawal of assets from the company, while Stroymontazh, by contrast, argued that they were restructuring debts in such a way.
Source: RBC daily "on 04/14/2009

Interest holders complained about the delay in entering houses in the operation. When they registered apartments they required payment only for glazing of balconies at 135-150 thousand rubles, and 22.3 thousand - for registration of property rights, as well as housing services charges for the next six months. Then managers were rude with buyers.

When police officers began to describe the property of Stroymontazh, they found that 1,700 apartments were still listed on the balance sheet of the company in November 2009, even though, it was announced that they had been delivered. Besides, they had no burden, and hence they could be sold to any number of times in a row.

Kirilenko was trusted even in the administration, head of governance and oversight in the construction of the urban share of the Construction Committee, Alexander Medentsev spoke at his side, calming the sharers.

In late 2009, 47 apartments in the residential complex "Solnechny", where people had already lived, were arrested. Outraged interest holders wrote a letter to Governor Matvienko.
Source: solomin from 27.11.2009

In 2010, the court found bankrupt the parent company OOO Stroymontazh Corporation, which was a guarantor for many loans of Stroymontazh.

Soon they managed to do so. The accounts of companies on Cyprus had been arrested that are holders of shares of Russian companies by Kirilenko.
Source: Fontanka.Ru on 03/02/2010

The court is considering the claim of the bankruptcy of Stroymontazh filed by an advertising company Imako Group in early 2009, supported by the contractor LLC "Contact".
Source: Fontanka.Ru on 03/02/2010

In June 2010, Kirilenko was put into the federal wanted list on Article 176 of the Criminal Code - «obtaining a credit illegally”, as part of a case of deliberate bankruptcy (Article 196 CC).
Source: Vedomosti on 07/26/2010