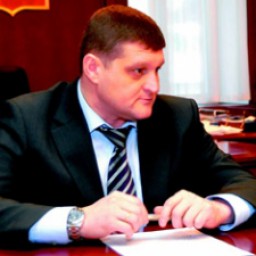 He was born on November 7, 1971. The son of Michail Trinoga - Adviser of Dmitry Medvedev. Higher education, electrical engineer.

In 2003-2008 - Deputy Head of the Chief Power Engineering Division of Mostransgaz LLC.

From 2009 - Deputy Head of the Electric Power Sector and Marketing Development in electric power industry Directorate in the Department of Marketing, Gas and Liquid Carbohydrates.

From 2009 - Chairman of the Board of Directors of Energoinvest-ME CJSC.

From 2010 - Chairman of the Board of Directors of Mezhregionteplosetyenergoremont JSC.

From 2010 - Member of the Board of Directors of Tyumen Energy Retail Company JSC.

From 2010 - Member of the Board of Directors of Centrenergoholding JSC.

He is married and has three children.

In the spring of 2011, personnel changes continued in the energy cluster of St. Petersburg. The Head of the Committee on Energy and Engineering Oleg Trishkin left his post. This is the third major personnel decisions in the energy sector of St. Petersburg after taking the office by the Governor Georgy Poltavchenko. Let's remind that at the beginning of November of this year, the General Director of the largest heat-suppling enterprise of the city GUP TEK SPb (the State Unitary Enterprise “Fuel and Energy Complex of St. Petersburg”) Alexander Isaev retired. His place was taken by Arthur Trinoga came from Gazprom JSC.

On November 7, 2012, GUP TEK SPb filed a lawsuit for bankruptcy of Kinostudia Lenfilm JSC. The reason for the lawsuit was the debt of the film studio to heat and power engineering enterprises in the amount of 545 thousand rubles, while its total debt was around 2 million.

“A claim for bankruptcy is only a tool to get our money. We apply this tool not because it is Lenfilm or is not – we only want to get the money”, a representative of the GUP TEK SPb said.

At the end of August 2012, the problem of consumer debts to heat-supplying enterprises of St. Petersburg was discussed at the meeting of the interdepartmental commission (IDC). The total amount of debt to energy companies amounted to more than 6.5 billion rubles. Deputy Governor Sergey Kozyrev supervising housing and communal services could not figure out where exactly the money disappeared.

The Deputy Chairman of the Housing Committee Valery Vogachev said that, according to his data, the heat total debt amounted to 4.8 billion rubles. But suddenly Vogachev immediately declared that the debt didn’t actually exist. According to his version, that was the fault of the heat energy meters installed in 80% of the city's buildings, which only took stock of received energy and didn’t took stock of heating system losses on the way from heat-supplying enterprises to consumers. All these losses GUP TEK and Teploset SPb JSC (St. Petersburg Heating Grid) shifted onto management companies (MC) and housing and municipal services (ZhKS). Vogachev noted that MC and ZhKS “saw” no money, and services for the heat were automatically paid through the Computer Center of Collective Using. Chairman of the Housing Committee Valery Shiyan confirmed that enterprises supplying with resources pinned their losses on housing organizations and suggested the companies to go to courts. The General Director of GUP TEK Arthur Trinoga explained that now he had 2.5 thousand inconsistent reconciliation acts, and if they went to court with each of them, then the company would ruin itself by court costs.

On the results of the meeting, Kozyrev charged the Housing Committee to prepare plans-schedules on collection of receivables payable to the TGC-1 and GUP TEK by October 1, 2012.

With coming of Arthur Trinoga, the GUP TEK SPb expanded its sphere of influence, experts said even last spring. Players of the market then were anxiously watching how employees of technical supervision of the GUP were carrying out unscheduled inspections of the condition of heating mains at some definite areas - exclusively those owned by subcontractors (Petrocom, SMU-53, etc.) who had won the tenders of the City Committee on Energy and Engineering. By the way, until recently Arthur Trinoga was the Chairman of the Board of Directors of Mezhregionteplosetyenergoremont JSC. The fact is not criminal, but in the context of all the events it is also very symbolic. It is interesting that there is no word about that in his official biography posted on the website of GUP TEK SPb. Probably it was done in order not to discomfort St. Petersburg subcontractors and not to produce “unnecessary” talks about Moscow expansion.

But it began to be discussed as soon as investigators began digging out the Petrocom and Rustrubprom. First visits of investigators began even in April of this year. At the same time, by coincidence, there were several subversive acts with pipes of Rustrubprom at some construction objects. For example, during the night of March 1, two homeless people were detained in the Vyborg district; they had filled up a pipe of DN-600, as it would be written in the police report, with “unidentified liquid”. The pipe, being prepared to installation, was damaged. Its further installation was impossible. And on April 4, at one of the building objects (where  a heating main was also being constructed) at the corner of Lunacharsky Prospect and Culture Prospect, four grenades wrapped in a plastic bag were found in the dug trench. Police considered those cases as hooliganism. But the market started and hid. And, as it turned out, it was not for nothing. Energy complex of St. Petersburg is actively being cleaned - from corrupt officials or from competitors. We will be able to understand that very soon -when it becomes clear who and for what price now is to supply with pipes.

... As it is stated in the Smolny, it will need at least 100 billion rubles and ten years of tireless work to bring the energy industry of St. Petersburg in a viable state. It is 10 billion rubles per the year. However, experts argue that this figure is even understated. Now laying of only one kilometer of heating networks costs at average 60 million rubles. According to Arthur Trinoga, the modernization requires more than 4 thousand kilometers of heating networks. In total it goes to 240 billion rubles. The 3 billion stolen by Trishkin from the budget seem to be a real trifle against this background.