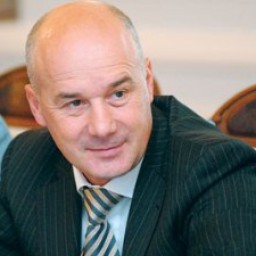 In 1982, he graduated from the technical engineering faculty of the Kabardino-Balkarian State University specializing in Industrial and Civil Construction.

In 1983, he moved from Nalchik to Leningrad. He began to work as a foreman in the construction department No. 13 of the trust Glavzapstroy No. 32, then he worked as a head foreman and site manager.

In 1992, together with Evgeny Georgievich Rezvov he founded Stroitelny Trest CJSC. From 1992 - Deputy Managing Director of "Building Trust".

A member of the Advisory Council on construction under the Governor of St. Petersburg, as well as a member of the self-regulatory organization - Non-commercial Partnership “Association of Builders of Saint Petersburg”

Honored Builder of the Russian Federation (2008)

Member of the Advisory Council on construction under the Governor of St. Petersburg

On January 30, 2006, at an extraordinary meeting of shareholders of Stroitelny Trest, on the initiative of the shareholder Beslan Bersirov, it was decided to create a homeowners association “Kolomyazhsky 15” and approve its charter. There were three people at the meeting - Evgeny Rezvov, Beslan Bersirov, co-owners of Stroitelny Trest JSC, and citizen Lyutinskaya joined them. It is unknown who she is, where she is from and what she has to do with the house on Kolomyazhsky because there is no such a person among apartment owners. But it is known that a lady with such a name was listed in condominiums, which the bosses of Stroitelny trest created in other places.

To finally deprive residents and owners of non-residential premises of the right to manage their house, on September 5, 2008, Bersirov and Rezvov declared liquidation of the Kolomyazhsky 15 condominium and appointed General Director of Uyutny dom Olga Martynovskaya the chairman of the liquidation commission.

In 2010, e-mails came to some media informing allegedly on behalf of the press service of Stroitelny Trest JSC about some problems within the company and serious changes in the leadership of the company.

Rezvov and Bersirov, who, as it turned out, kept a special schedule of negative publications about them, stated that this information was not true. They blamed owners of Kupechesky Dvor shopping mall with whom they had litigated since 2009.

There are at least three documents that confirm the fact that just the nailed down investors repeatedly for several years called for Lenenergo with a request for facilities for the second phase of Kupechesky Dvor . They were ready to solve the urgent problem entirely at their own expense. And to somehow provide vital activity of the shopping mall, they redistributed capacities of the first stage and used mobile transformer substations ... But whenever Lenenergo coordinated allocation of desired kilowatt, a question of placement of the new substation arose. And because the owner of the land was Stroitelny Trest JSC, investors had to go cap in hand to the developer. But as soon as a request for allocation of land turned out to be on the table of Rezvov, a sharp unambiguous answer followed, “I do not allow!”

The arbitration court fully satisfied the requirements of the investors on transfer of the premises owned by them to permanent sources of energy, having resolved these problems at the expense of the Stroitelny Trest.

In the court, some details in activity of the developer which strongly resemble those that fell within the Criminal code. For example, to obtain permission to enter a facility of the second phase of construction into operation, there were planted documents on implementation of electricity technical requirements of a shopping mall of the first stage. Moreover, at one of the court hearings, the representative of the Trest showed a copy of a certain trust agreement allegedly signed by the investors, that the allocated amount of capacity quite suited them, and they didn't apply for a bigger one. However, the original of this useless scrap of paper was presented nether a court of appeal, nor – later - police officers carried out an inspection at the request of shareholders.

A resident of St. Petersburg Peter Lischuk and his family turned out to be in an absurd and unbelievable situation. He bought an apartment and lost it only because he wanted to do everything according to the law.

The agreement was concluded in 2008. A year later, the house was built. During this time, the shareholder Lischuk made the full amount of the contract – 3 293 865 rubles - having completely paid for the apartment of project area of ​​54.22 square meters (one meter (one square meter cost 67 and a half thousand rubles). But he couldn’t enter his apartment.

The size of the apartment was less than stated in the contract of share participation, so Lischuk demanded compensation for the “missing” square meters. rules. But the heads of Stroitelny Trest JSC Rezvov and Bersirov decided to punish the obstinate person and filed a lawsuit to recover from him a penalty in the amount of ... more than 3 million rubles - despite the fact that he had already fully paid for the apartment.

The Vyborg district court noted this absurdity in its decision, indicating a clear disparity of the claims stated by Stroitelny Trest JSC and denied the developer's claim. But the heads of Stroitelny Trest JSC appealed against the decision to the City court, which unexpectedly fully supported their position. Judges Puchinina, Vologodina, and Petrova refused Lischuk to refund money for the missing meters.

Representatives of Stroitelny Trest frankly stated to the court that the company failed to guarantee that the apartment fully paid by him wouldn’t be sold to any other person before the end of the trial. Therefore, on July 21, 2010, the Kalinin district court put a lien on it till the end of the hearings. The next day the court definition came in the Federal Registration Service. However, even on July 26, Stroitelny Trest registered its ownership on the apartment.

The incident of shareholder Lischuk seems to become a classic example. It absorbed all with what a huge number of people living in apartments, constructed by Stroitelny Trest, had to face at different times. For the last few years, a residential complex on Bering street, Lomonosov and Bogatirsky residential complexes have been moaning and groaning, as  some tenants say, from the management company of Uyutny dom (many tenants already see this name as mockery) imposed to them by the developer.

The epic war of the co-owners of Stroitelny Trest JSC Evgeny Rezvov and Beslan Bersirov with participants of shared construction of residential house, built by Stroitelny Trest at Kolomyazhsky Prospect 15/2, has been lasting for years. After completion of the work, it  has been found out that the apartments of some residents are much smaller than they are to be according to the contract, and in addition Rezvov and Bersirov dispose the commonly shared areas as their own ones. In the areas designated for a free parking, they built two-storey paid parking not provided by the general plan, and they sell there a parking place for $ 1.2 million rubles. And 1567 square meter of the building surrounding grounds, encumbered with thermal and electrical networks, as well as with an absolute right of passage throughout the territory, and being general shared property, on March 22, 2010, they sold to Sport Time + LLC.

On May 25, 2011, another stall – Teremok pancake house - appeared on the building surrounding grounds. Despite the definite ban of its own Development Directorate, the KGA (the Committee for City Planning and Architecture) cancelled it for a particular stall, allowing KUGI (City Property Management Committee) to lease the land for the stall. On what basis it was done? The question becomes purely rhetorical, if to remember that this is a Teremok pancake stall owned by structures of the authoritative businessman Dmitry Mikhalchenko.

The aggrieved residents of 15/2, Kolomyazhsky Prospect sent statements about all the violations to President Vladimir Putin, Prime Minister Dmitry Medvedev, and Chairman of the Investigative Committee of the Russian Federation Alexander Bastrykin.

These people are the last hope of the citizens, since it turned out that the position taken by some of the inhabitants of Smolny is not on the side of apartment owners but it is on the side of businessmen Rezvov and Bersirov. It is so since control and supervisory officials turning a blind eye to all violations allowed and allow construction businessmen to ignore the requirements of city planning regulations and build excessive meters of housing instead of building parks, playgrounds, and sports fields.

And the hopes came true.

The investors received judicial confirmation of the assignment of places of temporary storage of vehicles of residents by the heads of Stroitelny Trest. Taking into account this judicial act expressed in assignment and further sale by the heads of Stroitelny trest CJSC of 98 parking places created for giving semblance to compliance with regulations and intended for temporary storage of vehicles, the fact of fraud was confirmed.

And already taking into account these new circumstances, the citizens sent statements of signs of fraud and evasion of taxes by the heads of Stroitelny trest JSC to the Minister of internal Affairs Kolokoltsev and the city Prosecutor Litvinenko. In the city prosecutor's office, the statements on fraud are still unanswered, and the letter to Kolokoltsev, written nearly three months ago, firmly settled in the Primorsky Department of Internal Affairs.

Now the aggrieved citizens have the only hope in the President, Prime minister and Chairman of the Investigative Committee, to whom they sent letters on September 3.

Issuance of illegal expert opinions, illegal issuance of permits for construction and commissioning of objects, unprovided by city planning documents, destruction of project documentation - this is an incomplete list of bureaucratic “achievements” that require investigative actions. These official crimes allowed Rezvov and Bersirov to fraudulently assign a parking land intended for temporary storage of vehicles of residents and to receive the super profits from the sale of the parking built on this land. Long mutually advantageous cooperation of construction block officials and shareholders of Stroitelny Trest CJSC Rezvov and Bersirov systematically allows the latter to increase the number of constructed and sold meters of real estate at the expense of failure to meet requirements on creation a normative number of objects of infrastructure. That control and supervisory officials turning a blind eye to all violations, allow construction businessmen, ignoring the requirements of town planning regulations, to build excessive meters of housing instead of building parks, playgrounds and sports fields. And now officials of the construction sector led by Vice Governor Igor Metelsky are struggling to prevent recognition of the violations of the law by the developer, and trying not to acknowledge the facts of absence of necessary number of temporary parking places, the fact of sale of the 98 places of temporary storage of vehicles assigned by the developer by means of outright fraud. The officials are well aware of all these violations, but it is important for them not to admit it and to do whatever they can to make these circumstances not come out.