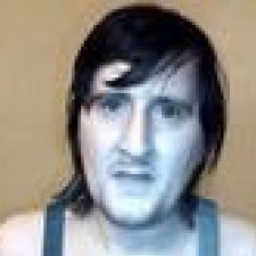 He is a hereditary thief in law. Abzianidze inherited criminal business from his father Revaz Abzianidze named Romashka (‘Daisy’), who died in 1994. His son led the Georgian criminal group specializing in burglary and theft of vehicles (for which the criminals got the name "barsetochniki” (‘bag snatchers’).

Abzianidze is ethnic Yezidis, as well as the famous leader in the international criminal world named Aslan Usoyan (Ded Hassan). In connection with this Abzianidze has always been associated with Usoyan, and Romashkich head the criminal gang which considered to be one of the structures controlled by Ded Hassan.

For many years Besik Abzianidze has been stated in all possible records by law enforcement and significantly influenced the part of the economy, which is controlled by Russian thieves of Georgian origin. Meanwhile, for the first time he drew attention of the mass media of Russia in the summer of 2008 in connection with his detention in Moscow. Then it was reported that members of the Main Department of Internal Affairs of Russia on CFD in Moscow detained intoxicated 37-year-old native of Georgia Besik Abzianidze during the inspection of documents.

The detainee was a "thief in law". According to the press service of the Ministry of Internal Affairs of Russia on CFA, he is better known as Romashkich in criminal circles.

They wrote that Abzianidze is an authority by the second generation: his father Revaz was known in the criminal world by the nickname Romashka and Revaz. He was a "thief in law" too.

After the death of Revaz in 1994, the criminal dynasty was continued by his son. Romashkich controlled "Georgian" criminal group that was specializing in burglaries, as well as thefts from cars. According to investigators, Romashkich had a strong influence on the criminal situation in the Moscow region.

a man presented guardians an immigration passport of specialist as identification. But, the police found the passport was fake and registered on a false name, but with a photograph of the detainee. The man refused to comment on where the document had come from.

Also during the personal search for Romashkich heroin was discovered - in an amount sufficient for about 15 doses.

On the facts of the detection of forged documents and drug ATS Mozhaisky "Moscow was a criminal case. The leader of the gang was arrested. In fact, Abzianidze was caught by chance, although we can not exclude the opportunity that his detention was the result of competition in his own neighborhood.

Journalists also reported that Abzianidze at the time of arrest led an ethnic gang, which had been attracting the attention of law enforcement officials for quite a long time before the moment of detention, however, it remained elusive. With reference to Interfax, which in turn referred to the Ministry of Internal Affairs, they wrote that intoxicated Abzianidze was arrested during the inspection of documents - that is, in fact, to legalize the version of the random detention.

Correspondents of Moskovsky Komsomolets described the details of arrest. As "MK" was reported by the GD of MIA of Russia on CFD, on Wednesday, around 23.00 law enforcement officers stopped a 37-year old native of Georgia, Besik, to check his documents. The man, who was under the influence of drugs, showed the guards the migration passport of specialist. However, police determined soon that the document was phony. "Scab" was made in the name of another citizen, but the picture was of Abzianidze. He refused to explain where he got it. Operatives, in turn, searched the intractable civil and found 15 doses of heroin.

After the detention of Abzianidze there was information appeared in the press that several criminal authorities had been expelled from Moscow. All of them were the citizens of Georgia, and lived on forged documents in the capital. According to investigators, George Gagaladze, Amiran Sapramadze and Besik Abzianidze made the criminal situation in the capital region seriously complicated. They were engaged mainly in burglary and robbery.

It was reported that George Gagaladze had already been deported to Georgia by that time, where he is waiting for 10 years in prison. The remaining criminal authorities will be waiting for deportation in detention center for foreigners.

In autumn 2008, journalists described a hearing of the criminal case brought against Abzianidze due to the discovery he had had drugs and a forged document.

On July, 28 the Kuntsevsky District Court of Moscow under the chairmanship of Judge Mikhailova issued the first verdict in the case of Abzianidze. Hereditary "kingpin" was found guilty of illegal possession of narcotics and use of falsified documents and was sentenced to 1 year of imprisonment in a colony and a fine of 10,000 rubles.

Prosecutors have appealed the verdict, finding it too soft. On September, 8 the Moscow City Court quashed the sentence and the trial court sent the case of Abzianidze for a new trial.

On Sept. 30 the case was re-heard in the Kuntsevsky District Court by a new panel of judges. As a result, the judge Kirtichuk showed corporate solidarity with a colleague Mikhailova and appointed Romashkich an absolutely identical punishment. It was the turn of lawyers of Abzianidze to appeal the verdict. But the Moscow City Court dismissed the appeal against the defenders of the Georgian "thieves in law" and upheld the verdict by Kuntsevskiy district court.

It was assumed that after this Romashkich should be transported to one of the colony of Permsky Region.

It was also reported that the day after the cancellation of soft sentencing of the "thief in law" Besik Abzianidze Moscow City Court considered the criminal case of another authoritative native of Georgia - "kingpin" Lasha Nizharadze. Lawyers for the leader of Georgia's OPG filed an appeal against the decision of Nikulinskiy district court of Moscow from July 10, in which their client was convicted of drug possession and sentenced to four years of imprisonment in a penal colony. Yesterday the Moscow City Court judge, having read the case materials, expressed full agreement with their counterparts from lower courts and decided to send Nizharadze to the colony. Agency "Prime Crime" was reported about this by press service of the Moscow City Court.

33-year-old native of the village Gvishtibi, Tshaltubsky District of Georgia, Lasha Nizharadze was arrested on April, 11 at house number 28 on the Ryabinovaya Street by the staff of special investigative office on GВ of MIA of Russia's Central Federal District. When he was searched the "kingpin" turned out to have 2.99 grams of heroin. Nizharadze was arrested and incarcerated in the jail (SIZO)-3 in Moscow.

In spring 2009, Besik Abzianidze was remembered in connection with the detention of another Georgian kingpin in Moscow, whose interests were associated with Abzianidze. According to a source in the police, the perpetrator was detained while trying to steal bottles of elite wine worth 5,000 rubles. The detainee Teimuraz Jalagonia, a native of Batumi, is also named Chinchhliya, and in Georgian – Derzky (‘impudent’).

In 2008, he had been already attracting the attention of members of the MIA: according to the source of agency, he was caught during a major underworld rallies on Klyazma reservoir, which was attended by 37 thieves, as Lenta.ru reports.

In total, according to the Ministry of Internal Affairs of Russia, , about 60 percent out of the 1200 thieves, who were in Russia at that time origin from Georgia.