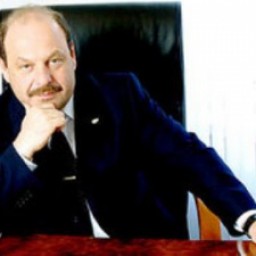 Boris Abramovich was born on January 29, 1960 in Krasnoyarsk. In 1983 he graduated from Riga Institute of Civil Aviation.

From 1983 he worked as a shift engineer and shift supervisor, then head of production aircraft maintenance base in Krasnoyarsk united squadron.

In 1986 he was appointed chief engineer at the aircraft factory №67 in Krasnoyarsk.

From 1988 to 1990 he was chief of aviation and technical base at Cheremshanka airport.

From 1990 to 1995 he worked as deputy head of aircraft operation department, then the chief engineer at the Krasnoyarsk Civil Aviation Authority.

In 1995 he and his twin brother Aleksander founded and headed the Siberian Air Transport Company (Sibaviatrans) JSC.

In June 1998 he was elected CEO of Krasnoyarsk airlines (KrasAir) JSC.

In 2005 he joined the board of directors of Omskavia Airline JSC, which was headed by Aleksander Abramovich.

In 2005 Abramovich's assets were estimated at 1.7 billion rubles.

According to media reports, in 2006 KrasAir ranked fifth among Russian airlines in terms of transportation, whereas most of the sources of the company claimed the fourth place.

Abramovich is an academician of the International Academy of Information, head of Department of Economics and air transport manufacturing at Siberian Aerospace Academy. He has a number of honourary titles.

Boris Abramovich was appointed CEO of Krasnoyarsk Airlines in June 1998, immediately after his victory over Aleksander Lebed in the governor election.

Krasnoyarsk Krai suffered the most from Abramovich’s activities. Krasnoyarsk residents were forced to fly to Moscow at prices inflated by 10 times. But for a long time as far as KrasAir seemed to be doing well, regional authorities did not pay much attention to its work and even provided the airlines various tax deductions. Common Krasnoyarsk residents cursed Abramovich’s company for unreasonably exorbitant fares which were almost the highest in the country.

In summer 2004 when Air Bridge management company was established, the largest airline alliance began to form. It includes Krasair, Domodedovo Airlines, Sibaviatrans, Omskavia, and Samara. Subsequently, the alliance entered the market under the brand AiRUnion.

For the first time a criminal case against KrasAir management was instituted on May 17, 2006. Prosecutor General's office wanted to bring charges of "fraud committed by an organized group or large scale fraud" against top management of the company The ground were "illegal actions of several persons" who were related to the contract of guarantee for AirUnion bond issue worth 1.5 billion rubles. Officials of the airline, as said in a statement of the Prosecutor General’s office, "wishing to avoid a blocking decision of the Federal Property Management Agency deliberately misled the agency’s representatives to be able to conclude these transactions." Once the loan "contrary to the opinion of the state" was issued, these "persons" disposed of the raised money "at their discretion."

Many people blamed Boris and Aleksander Abramovich for the notorious August 2008 crisis, when thousands of passengers were stuck at Russian airports for several days. Supreme Russian authorities had to intervene in the situation to help people, who had paid money to the Abramovichs, reach their destination. The brothers at the time disappeared in an unknown direction. In subsequent years they were seen in Hungary, Latvia, Israel, and Italy.

In 2009 the newspaper Corriere della Sera reported about preliminary talks over buying the airport Tassinyano (Apuan Riviera), that allegedly were held by Roman Abramovich.  Allegedly he came and studied the document in person. However, John Mann, a spokesman for Millhouse Capital that manages assets of Roman Abramovich, said the information in the article was false. "Perhaps they are confused. And was not Roman, it was Boris Berezovsky. "

In February 2007 Air Bridge purchased for 800 thousand euros the Hungarian national airline company Malev. The deal was financed by Vnesheconombank (VEB). The Russian side undertook all the debts of Malev reaching 130 million euros. Boris Abramovich headed the board of directors of Malev. However, Hungarian airline was not included in AiRUnion.

In January 2009 VEB became the owner of AirBridge Zrt, shares previously held by the bank as security deposit. A total of 49 percent of the company’s shares belonged to Abramovich, and another 46 percent were owned by "Hungarian firms linked with Abramovich." In March 2010 VEB returned 95 percent of Malev shares to Hungary.

At the end of May 2011 VEB filed a lawsuit against Abramovich for defaulting on a loan issued by the bank for the purchase of Malev. The amount of the claim was 40.5 million euros.