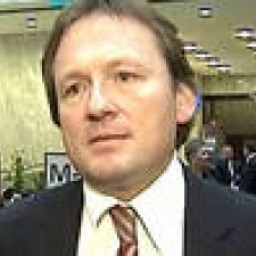 Boris Titiov was born on 24 December 1960  in Moscow. His father was an officer of Ministry of Foreign Trade.
In 1983 he graduated from Moscow State Institute of International Relations (MGIMO) under the USSR  Foreign Ministry with a degree in international economics.
In 1983-1989 he worked for the Foreign Trade Association, Soyuznefteeksport. He was responsible for supplying  industrial oils, petroleum and petrochemical products to Latin America and the Far East.
In 1989 he became a co-founder of  Soviet-Dutch joint enterprise, Urals oil trading company.
In 1989- 1991 he headed of the department of chemistry at Urals company.
In 1991  he invited several Russian and British partners and established his own company for export of Russian oil and gas and chemical products, Solvalub LTD, London. Solvalub stands for Solvents and Lubricants, that is, industrial oils and additives.   SVL  group of companies investment and industrial group  was founded on the basis of Solvalub.
In 1991 - 1996 he was a managing director of Solvalub Limited and Solvalub Group.
In 1996 he established a subsidiary of SVL in Russia,  Interkhimprom financial and industrial group.
In 1996- 1999 he was the president of Interkhimprom.
In 1999 he became chairman of the joint board of  Interkhimprom.
On 6 October 2000 he was elected to the board of the Russian Union of Industrialists and Entrepreneurs.
In November 2001  he became vice-president of RUIE  and headed a working group responsible for  restructuring of  gas industry.
In 2001 he was appointed president of Nitrogen agrochemical corporation that produced mineral fertilizers.
In 2002, after his resignation as president of Nitrogen, Titov was the chairman of the board, then an executive director of Solvalub group of companies.
On  21 May 2004 at the IV congress of Business Russia movement he was elected chairman of  the movement.
From June 2004 to June 2005 he was a board member of  Probusinessbank.
In April 2005 he joined the Council on Competitiveness and Entrepreneurship under the RF Government.
On 30 September  2005 he announced his withdrawal from RUIE.
In October 2005 became a member of the Presidential Council on national projects of high priority.
On 1 October 2007 he was elected to the Supreme Council of United Russia .
On16 November 2008 he was elected co-chairman of  Just Cause.
Titov is married and has two children, son Pavel and daughter Maria. His wife Elena was reported to be the head of the foundation for development of  Russian glass production.
In 2010 Titov's wealth  was estimated at $ 310 million.

Titov realized early on how to use  political commitment to improve his position. When a student, he became a Komsomol activist, then joined the Communist party and remained its member  until it was  prohibited  in August 1991. The membership provided him with wide range of opportunities.  While studying,  he worked as a Spanish language translator and in 1983 he went on business trip to Peru. The same year Titov started his career at Soyuznefteeksport  where he was responsible for  supplying Latin America and the Far East with industrial oils and petrochemical products. When founding  Urals  joint enterprise, Titov  collaborated with the KGB. Some co-founders of the company were officers of the KGB Main Directorate. Moreover, former Soviet spy in Sweden Andrei Pannikov was appointed director of the company.

In 2008 Titov was reported to take part in establishment of a new right-wing party in Russia which was   mentioned in media reports as ''a Kremlin project''.

In February 2008 it was first announced about ''unification of all the forces on the right wing''  that is, merger of Civil Force party and the Democratic Party of Russia (DPR). And in August   the leaders of  DPR and  Civil Force  started negotiations. In September 2008 after leader of Union of Right Forces Nikita Belykh had quit his party, it became known that the party  would also join  the new political bloc founded by the Kremlin. At that time chairman of the Supreme Council of Civil Force party, well-known attorney Mikhail Barshevsky  resigned as well. He transferred powers of the chairman of the Supreme Council of Civil Force  to Titov, who had never been included in the panel before.

In July 2009 Titov announced his intention to resign as chairman of Business Russia  in order to dedicate himself to Just Cause party. He stated that  in the forthcoming elections to  Moscow legislature his party was going to criticize severely Moscow authorities which pleased Titov a lot, while ''business can not put at risk its relations with authority''. Soon, however, it became known that  Just Cause would not participate in the elections at all, although a few party members were not happy about that. It was Titov's job as a Kremlin spy.

In December 2009 Titov wrote a letter of resignation as co-chairman of Just Cause. He emphasized  that it was his post he quit and not the party.   The reason was his conflict with another co-chairman of the party Leonid Gozman caused by their disagreement on ''the way the party should do''. Titov   considered Just Cause  as a lobbying tool for medium business'',  unlike Gozman who intended to focus not on economic, but  on political aspect of the party work.

In January 2010  political council of the party considered Titov's  application and held that he would remain co-chairman of Just Cause until  an extraordinary congress,  because, according to the articles of the party, it is only the congress which is  entitled to release a party member from his duties. Meanwhile, some members of the  political council   told that the decision on Titov's resignation was influenced by the Kremlin. Presidential Administration was ''just afraid that former Union of Right Forces and Anatoly Chubais would take control over the party.

Titov long was Vladimir Putin's puppet. His pro-Kremlin orientation became obvious  on 6 May 2011 when the Prime Minister announced the formation of All-Russia Popular Front   which was supposed to join forces supporting the policy of United Russia. On  same day  Titov said that Business Russia was eager to join the ONF.

In June 2011   Just Cause party  eliminated  triple co-chair. Well-known businessman Mikhail Prokhorov was elected the sole leader of the party, while Titov quit the board.

The  Kremlin puppet got worn out, so political engineers of Presidential Adviser Vladislav Surkov found more suitable candidate for management of the Kremlin project. And Prokhorov seemed an obedient manager to them.