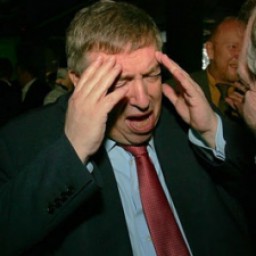 Boris Khait was born on December 7, 1951 in Grodno, Byelorussian SSR. He graduated from the energy department of Moscow State University of Railway Transport (MIIT).

In 1974-1977 he was chief power engineer of the Central Clinical Hospital of Ministry of Railways of the USSR.

In 1977-1988 he was head of department, then deputy general director of the Moscow Research Institute of X-ray radiology.

Since 1995 he has been president of Insurance Group Spasskye Vorota

Since 1997 he is member of the Moscow Bank Union

From June 1999 he was chairman of the board of the Moscow Bank Union.

He was awarded Order of Merit and Order of Friendship.

He is married and has two sons.

In 1992 Centre for Humanitarian and Business Cooperation, which was later renamed to Talion JSC, was established in St. Petersburg. The founder was Aleksander Yebralidze (alias Alik-Rynok), who represented the interests of Moscow thieves in law from Georgia in St. Petersburg. His partner was the St. Petersburg American, Yakov Barsky (known in the U.S. as Yakov Dan), the financier of Ilia Traber, who owns of the St. Petersburg port. Apart from the two mentioned men, Talion board of directors was comprised of the owner of JFC export company, a major trader in bananas Vladimir Kekhman, and a Moscow oligarch Boris Khait , president of the insurance group Spasskye Vorota.

After that at the port of St. Petersburg there was the largest oil transportation company, In-transit, a subsidiary of the above mentioned Centre. The company could control up to 20% of the entity. Influence of In-transit can be seen from the fact that among its clients there was one of the top Russian oil traders, Gunvor.

On January 27, 1997, Vladimir Gusinsky resigned as CEO and President of the Most Group and Most-Bank and became president of the company Media-MOST CJSC. The president’s chair was filled with an old friend of Vladimir Gusinsky, Boris Khait, who "was on good terms with the mayor of Moscow." Itogi magazine began isuue to issue publications of the book by Yuri Luzhkov, "We are your children, Moscow." And in the summer the accounts of the Moscow Metro were transferred from Montazhspetsbank in MOST-Bank.

In November 2005 Swiss customs arrested trucks with pictures of from Moscow State Pushkin Museum. A total of 54 paintings were detained under the claim of Swiss company Noga.

The collection was estimated at $ 1 billion. On the Russian side insurance of the exhibition was performed by the company of Boris Khait, Spasskye Vorota.

According to the prosecution, Khait transacted $ 2.6 million through the office of the bank from Israel to Russia. For that purpose he had a front man, whose identity has not been established by the police department for combating economic crimes.

In 2009 the media reported that a Tantema CJSC was going to build an IFC in place of the hotel Mir on Novy Arbat. In addition, Tantema was to build a sports complex on Rublevsky highway.

The primary founder (99%) of Tantema CJSC was Boris Khait. But he claims to have sold the company six years ago and has nothing to do with the project. He did not name the buyer.

But Moscow government argued that Tantema was controlled by structures linked with Spasskye Vorota. At the same time, officials noted that Tantema may end up not building the facility, and sell it, because the company is the only investor in the project.

In spring 2011 Austrian insurance company Vienna Insurance Group (VIG) received an offer to sell its shares in the life insurance company MSK-Life, in SG MSK, and in Sovita to its business partners. The proposal was accepted because the group owned only minority stakes in these companies.

The Austrian company entered Russian market in 2005, when it agreed with Moscow Insurance Company (MIC) controlled by the Bank of Moscow and Moscow government to buy blocking stake in the MSK-Life. Then, together with the Bank of Moscow, they bought from TBIH holding company control over large retail insurer Standard-reserve and became a minority shareholder in it. They also bought got a share in Sovite.

A few years later Standard-reserve teamed up with MIC in SG MSK, the share of VIG in the company decreased to 5%, and future merge of SG MSK with the Spasskye Vorota threatened to further diminish the share of the foreign company. VIG decided to leave the Russian projects.

It was not reported who was going to buy a stake of the Austrians in Moscow insurers. The parties to the contract agreed not to disclose terms of the transaction. However, experts assumed that the buyers of the shares owned by the Austian company may be entities controlled by Boris Khait.