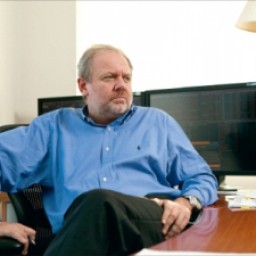 Boris Jordan was born on June 2, 1966 in New York (USA) in a family of Russian immigrants. His grandfather was the minister of education in the cabinet of ministers of Peter Stolypin. Jordan is a US citizen. He graduated from the University of New York in 1987. He was an apprentice in the U.S. Congress and has a bachelor's degree in US-Russian economic relations. Boris Jordan worked in project finance department in Kidder Peabody Investment Bank. In 1989-1992 he was vice president of GPA Capital Inc. of GPA Group PLC;

In 1992 he was advisor at Goskomimushchestvo (State Property Committee) of Russia and participated in the development and implementation of the first collateral auction sales;

Since May 1995 he was president and CEO of investment firm Renaissance Capital in Moscow. He was the initiator of its establishment.

In 1997 he took charge of the financial group MFK Renaissance created on the basis of Renaissance Capital.

From August 1997 Jordan serves as chairman of the Renaissance Insurance Company, a subsidiary of Renaissance Capital

In 1997-1999 he was member of the board of directors of SIDANCO Oil Company OJSC.

Since the beginning of 1999 Boris Jordan was the manager of the Sputnik Fund (stakes in several companies including Svyazinvest, SIDANCO, Renaissance Insurance, Media Projects Europa Plus, Comcor-TV, Afisha, networking and telecommunication projects).

Starting in July 2000 he was president and chairman of the Sputnik Group which owns stakes in major companies  like Svyazinvest, Techinfo Communications, and Kyivstar in communication industry; transport companies like Novorossiysk Shipping Company; forestry industry companies like National Timber Company; oil company Sidanko; Dovgan Trading House; Renaissance Insurance; and media companies like Europe plus and Afisha. Jordan was chairman of the board of directors of Sputnik Technology Ventures.

On April, 3, 2001 he was appointed CEO of NTV TV channel at an extraordinary meeting of shareholders of NTV, initiated by Gazprom. He left the post in January 2003.

Since 2006 he has been president of Renaissance Insurance.

In 1999 Jordan set up a charitable foundation for Cadet Corps. He transferred 1 million dollars to the fund account and attracted other sponsors. The funds assets were allocated for the development of the Cadet movement. Jordan also assisted financially to Children's Fund of Vladimir Spivakov. He donated large sums of money to the Russian Orthodox Church. Sputnik Group contributed 100 thousand dollars for the restoration of the Annunciation Church in Alexander Nevsky Lavra in St. Petersburg, where Alexander Suvorov had been buried. Among other credits of Jordan is the fact that the ashes of the Russian writer Ivan Shmelev and his wife were transported to their homeland and were buried in the Donskoy Monastery. An unprecedented event, a grand presentation of Sergei Mikhalkov's Barber of Siberia in the Kremlin was mainly funded by Sputnik Group.

Jordan is married and has two sons and a daughter.

In 1990-1992, Jordan worked in the department of investments in European bank CS First Boston, and in 1992-1995 headed the Moscow branch of the same bank. But at the same time Gretchen Wilson, a U.S. citizen, turned up in Boris Nemtsov’s Nizhny Novgorod.  The woman quickly privatized the largest Balakhna paper mill with the help of the young governor in just seven million dollars (the real price of a unique plant exceeds that price tens of times). They drained from the mill everything that possible, and subsequently destroyed it by creating intolerable working conditions. It is interesting that Balakhna paper mill was privatized by the U.S. bank CS First Boston, Moscow branch of which was headed by Boris Jordan. The privatization was carried out with the assistance of the German company Hurleys, also affiliated to Boris Jordan. And later, in 1997, Gretchen Wilson married Boris Brevnov, president of NBD-Bank, and changed her name to Gretchen Wilson Brevnova. After that Nemtsov, Brevnov, and Wilson Brevnova moved to Moscow where Nemtsov was appointed first deputy Prime Minister and Brevnov became head of RAO UES of Russia.

In 1996 Jordan was the owner of a 10 percent stake in Novolipetsk Metallurgical industrial complex, and stated his claim to manage the giant of iron and steel industry. It turned out that three years earlier this American bought 17 million vouchers for the bank CS First Boston. One in eight of the vouchers was issued by the State Property Committee.

Jordan privatized Balakhna paper mill not without the help of his compatriot Gretchen Wilson. Gretchen, who represented the World Bank in Nizhny Novgorod, introduced the young collegue to the local governor, Boris Nemtsov, and her future husband, Boris Brevnov.

In 1997 Jordan was introduced to George Soros and Vladimir Potanin. As a result, a controlling stake in Svyazinvest was acquired by Soros’ team for 1 billion 875 million dollars. Moreover, there were so many violations during the auction that it caused a war between the group of Soros with Chubais, Koch and Potanin on his side, and the group of Berezovsky and Gusinsky. The case ended with the so-called book scandal and resignations that made a lot of fuss.

A year later George Soros wrote a book in which he made a confession that "Svyazinvest was the worst investment of money in my whole career."

Boris Jordan, appointed by Gazprom as head of NTV in April 2001, stressed that he was able to trace only 460 million dollars which were put into action. According to him, it would probably be impossible to get accountability for the remaining 750 million dollars. His statement added fuel to the fire of fierce propaganda battles that ensued around the future of NTV channel. Vladimir Gusinsky claimed that his company had been brought under control in order to destroy freedom of speech in Russia, while Gazprom pointed out that it wanted to repay debts of the company which was poorly managed. In his first detailed analysis of the financial situation of NTV since his appointment Jordan stressed that the channel had not been profitable since 1995 as of that moment its debts amounted to 82 million dollars. A total of 20 leading journalists of the network received an annual salary of approximately 300 thousand dollars. Company employees were granted loans amounting to 6 million dollars.

According to Jordan, Gusinsky’s holding company Media-Most had two privately owned aircrafts, Gulfstream and Challenger, for which the company paid at least 50 million dollars, annual maintenance reaching several million dollars. He estimated that NTV received annually up to 50 million dollars from the so-called black advertisement or from politicians and big businessmen in exchange for positive or neutral coverage on television.