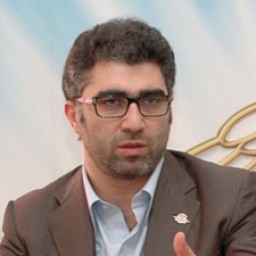 He graduated from Moscow construction institute and financial academy at the government of the Russian Federation; Worked as the economist and the senior economist in Sea joint-stock bank.

In 1997-2000 he was responsible for investment and financial activity of joint-stock bank “BIN” as the vice-president, and then the senior vice-president.

In 2000-2002 — Senior Vice-President on economy and finance, first vice-president of AO "Slavneft”.

Since May, 2002 — Counselor to the general director of OAO "Rosgosstrakh".

In July of the same year he was appointed as CEO of OAO «Rosgosstrakh».

Together with brother Sergey he is almost full-owner of OAO «Rosgosstrakh», Russ-bank and City savings and loan association.
Source: "Wikipedia"

For the first time Danil Khachaturov got to sphere of interests of large mass-media in 2003 when he was the only one of representatives of large insurance business in Russia who made the political statement addressed personally to the chairman of the government Mikhail Kasyanov with the request to change the antimonopoly law. It did not let "Rosgosstrakh" enter the market of obligatory kinds of the insurance financed at the state expense. Then “Rosgosstrakh” was not allowed to participate in tenders for insurers which were held by the ministries and departments for insurance of the needs at the state expense. The reason was the structure of "Rosgosstrakh" and law statements. "Rosgosstrakh" consisted of OAO "Rosgosstrakh" (an authorized capital stock of 162 million rubles.) and a number of affiliated Open Companies. The cumulative capital of "Rosgosstrakh" system made 985.7 million rubles. However, according to the statements of laws on competition protection, the insurer, submitting documents on tenders, couldn't show the cumulative capital of the system consisting of different legal entities.

It’s difficult to understand, what "Rosgosstrakh" expected for, addressing to the head of the government. Even in case of approval of its offers modification of laws is a long process, and not everything in it depends on the government. It is interesting that none of the governmental departments supported the initiative of Khachaturov.
Source: Newspaper "Kommersant" № 201/P (2804) from 11/3/2003

In December, 2003 Khachaturov initiated large scandal in Eastern Siberia. At press conference in Omsk Khachaturov accused the local company «Russian insurance traditions» of refusal of payments. Top-managers of "Rosgosstrakh" arrived to Omsk with the check of the work of the local branch on motor third-party liability (MTPL) which ended up with public charges to another insurance company.

The given statement of Khachaturov was interpreted as competition display in the insurance market in Omsk – «Russian insurance traditions» was then the strong contender for "Rosgosstrakh" in that region. In business environment this statement caused bewilderment.
Source: Kommersant (Omsk) № 233 (2836) from 12/23/2003

In the middle of 2005 journalists surprisingly found out that the head of a group of companies "Rosgosstrakh" and the councilor of City savings and loan association (GIB) Danil Khachaturov was also their basic owner. He had to confess in it for the sake of attraction of IFC as co-investor to the bank. Khachaturov had kept that information as top secret before. In particular, it was specified that management of GIB possessed 5 % of its shares, and the rest 95 % belong to Danil Khachaturov.
Source: Magazine "Money" № 26 (531) from 04.07.2005

In August, 2006 journalists paid attention that unexpected support to interests of "Rosgosstrakh" was given by the head of Krasnodar region of that time Alexander Tkachev. Together with the president of a group of companies OAO "Rosgosstrakh" (RGS) Danil Khachaturov he signed the agreement in which cooperation in the medical insurance market was defined as one of priority directions. Experts of the market assumed that expansion of the company in the region could be attempt to enter the market of obligatory medical insurance where regional insurers were presented only. Interests of regional insurers thus were obviously restrained.
Source: Kommersant (Rostov) № 143 (3474) from 05.08.2006

In November, 2007 Danil Khachaturov appeared in the center of loud family scandal. His former wife Anna submitted the claim about property division. They divorced in August even, and Anna Khachaturova applied for half of actives of the husband which magazine Forbes estimated in $1.3 billion. In the claim she asked to recognize 50 % of City savings and loan association (GIB) as belonging to her and, according to her lawyer, further intended to demand division of shares of "Rosgosstrakh". According to lawyers, absence of the marriage contract and the agreement of lawsuit of spouses gave her a fair shake.

Thus Anna Khachaturov declared that Danil refused to discuss issues of definition of property shares acquired during marriage. Moreover, according to Anna, he hid from her the information, concerning property. In the claim it was said that during marriage mister Khachaturov got the share in OOO "Rinocenter" which was the unique founder of OOO GIB.

"I know that my former spouse tried to sell GIB, - the claim said, — after our marriage is broken up, the respondent in every possible way tries to hide the property from me, and all documents confirming its presence, are hidden as well".

It was informed that at the moment of scandal GIB already was sold to the company «Morgan Stanley» for approximately $200 million, the transaction took place in the spring, 2007. As a matter of fact, after that the former wife of mister Khachaturov could apply only for the money received by her husband as a result of the transaction.
Source: Newspaper "Kommersant" № 211 (3787) from 11/16/2007

In February, 2008 following the results of session of the government the deputy minister of finance Sergey Shatalov made the statement that in 2008 the state could already lower the share in OAO «Rosgosstrakh» (then 25 % plus four shares) to zero. Mister Shatalov refused to discover, how it was going to happen.

At that point in time holding RGS included OAO "Rosgosstrakh", 10 affiliated insurance companies, 76 branches and about 3 thousand divisions all over the country. Staff was over 97 thousand persons. Clients accounted 20 million citizens, about 200 thousand enterprises, 1.5 million legal entities. The blocking share holding (25 % plus four shares) of OAO «Rosgosstrakh» was the state property. The others (75 % minus four shares), by data for January, 1st, 2006, belonged to OOO "RGS-CAPITAL". According to bases of Unified State Register of Legal Entities and SPARK, "RGS-CAPITAL" belonged on 0,5 % to the head of "Rosgosstrakh" Danil Khachaturov. 99 % of "RGS-CAPITAL" belonged to OOO "Olymp-finance" owned for 100 % by the younger brother of the head of "Rosgosstrakh" Sergey Khachaturov. Following the results of 2006 system RSG collected, according to Rosstrakhnadzor, 61.4 billion rubles.

The news announced by mister Shatalov was unexpected for the market. Presence of "Rosgosstrakh" in the list of the strategic enterprises interfered to its privatization; for any operations with a state block of shares it was necessary to exclude it from the list by the decree of the president.

One more possible way of privatization of the insurer was additional issue of the shares in which the state would not take part.

It was noticed that actually it was the beginning of process of getting control by Khachaturov over "Rosgosstrakh".
Source: Newspaper "Kommersant" № 33 (3850) from 2/29/2008

In April, 2008 loud trial under the claim about division of property of the head of company "Rosgosstrakh" Danil Khachaturov, submitted by his former wife Anna came to the end. After five months of trial the court refused to madam Khachaturova her requirements.

The lawyer of Anna Khachaturova found out the decision of the judge from journalists. "It is amusing, I do not know anything about it, as well as Anna, — Irina Ponomareva declared. — I congratulate our justice that it was possible to create precedent when the squire managed to make decision without complainant present. I’m puzzled, for what purpose Khachaturov shows his readiness to show his financial and administrative resource all over the country …»
Source: Newspaper "Kommersant" № 67 (3884) from 4/19/2008

In May, 2008 in a press there were messages on a possible conflict situation in connection with the decision accepted by government on refusal of shares in "Rosgosstrakh". It was informed that at the basic owners of "Rosgosstrakh" Khachaturov brothers might have undesirable minorities. Rosimushestvo suggested the Ministry of Finance to sell out 25 % plus four shares of "Rosgosstrakh" (RGS), which were in state property. They wrote that to avoid occurrence of co-owners, brothers should pay out up to $400 million

It was noticed that this plan strongly differed from plans of owners of RGS. Danil Khachaturov in 2007 announced additional issue after which it was supposed to offer 10 % of the company to its employees. ""Rosgosstrakh" doesn't support sale of a state block of shares to the outside investor, — vice-president RGS Andrey Baturin declared to journalists, — to impose us the strategic investor means to stop company development".
Source: Newspaper "Kommersant" № 81 (3898) from 15.05.2008

In October, 2008 Danil Khachaturov made new rather risky step from the political point of view. "Rosgosstrakh" the first of insurers informed the employees about forthcoming reductions. The head of the company Danil Khachaturov wrote the letter to the subordinates in which he informed that, "unfortunately, he would have to fire a part of workers". It was not mentioned how many of 30 thousand employees would be dismissed.

Journalists in this connection remembered that in the summer of 2007 Danil Khachaturov declared intention to sell out 15 % of shares of the insurance company to almost hundred thousand employees and agents by the end of 2008. This topic is given short comments now. "It depends on a financial situation in the market, — Andrey Baturin says, — I do not say that this program is over, but I can not tell about forecasts on it".
Source: Newspaper "Kommersant" № 194 (4011) from 10/24/2008

In February, 2009 it became known that the block share holding of "Rosgosstrakh" belonging to the state, would be reduced to 12-15 %. It was informed that the state place in the capital would be occupied with employees of the insurer whom it decided to sell 10 % of shares. It was thus informed that "Rosgosstrakh" does not manage to become private company "Rosgosstrakh" yet. The state for the period of crisis planned to keep the participation in the company as the guarantor in handling problems of solvency of the insurer with a 12-million army of automobile owners, MTPL clients.

It was thus informed about carrying out of additional issue that was necessary for "Rosgosstrakh" to minimize debt which was estimated then in 12.3 billion rubles. Besides, the saved up losses of the company were estimated in 2 billion rubles, and losses from investments in stock market — 3 billion rubles.
Source: Newspaper "Kommersant" № 24 (4079) from 2/11/2009

A bit later there were messages that the considerable part of actives of group "Rosgosstrakh" would be transferred to the possession of the Cyprian company. In "Rosgosstrakh" it was asserted that the transaction had technical character. However, according to experts, the transfer of assets of the insurer to the former offshore jurisdiction was used to involve financing for the decision of financial problems of "Rosgosstrakh".

In this connection the Federal antimonopoly service (FAS) informed on the approval of the petition of Cyprian RGS Assets Limited about acquisition of 99.8475 % in authorized capital stock of OOO "RGS Capital".

Thus the opinion was published that Danil Khachaturov of "Rosgosstrakh" protected the active from unfriendly actions of fiscal bodies or minorities, trying to deduce the company from under the Russian justice.
Source: Newspaper "Kommersant" № 88 (4143) from 5/20/2009

In August, 2010 Rosimushchestvo appointed auction carrying out on sale of the last of 13.1 % of shares of "Rosgosstrakh" which was in state property to September, 29th. The state defined the market price of a package— 8.7 billion rubles. Expected buyers were Danil and Sergey Khachaturov brothers. Experts considered that they would not have competitors.
Source: Newspaper "Kommersant" № 158/P (4458) from 8/30/2010