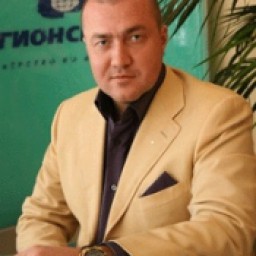 Mr.Rybakov graduated from Kemerovo State University where he studied at law department with distinction in 1997. In 2004 he passed Ph.D. defense at A.S. Griboedov Institute of International Law and Economics in Moscow.

Since 2003 — co chairman ,and since 2007 Chairman of the Bar of Regionservice

The law bureau Regionservice was founded in 2000 by the graduates of  Kemerovo State University: Andrey Kirikov, Denis Rybakov and Sergey Uchitel. Their first project was the removing of group of companies MIKOM from managing of Kuznetsk Steel Mill JSC.As the result, their client, group of companies EZRAZ got the right to manage the mill.

In June 2005 Denis Rybakov and Alexander Pushilin ,the CEO of SIBERIA INDUSTRIAL INVESTMENTS company, came to the casino, raised a stink, called for securities of their private security company Sokol to “regulate” the problems and opened up shooting. After the order to lay down arms they continued fighting. As a result 3 persons were taken hospital with severe injuries.
The arriving operational group of District Department of the Interior of Leninsk region disarmed securities and started to call everybody in question. The aggressors — armed securities and director with solicitors — just sat in their cars and drove away. Nobody arrested them, nobody checked their documents, and disarmed them, though they had at list two pieces.

On 11June 2005 one of the securities of the directors of Regionservice and  SIBERIA INDUSTRIAL INVESTMENTS company Alexey Fedorin and Evgeny Ponomarev had a scrap with the security and under the threat of use of fire gun pushed  Alexander Belanchuk into their Mercedes -500. He was taken to the place not far from the market against his will and bet with legs and pistol grips. The third person beating Belanchuk was Mr. Mayorov.

Belanchuk was taken to hospital with various infected tear-contused wounds of the right side of his chest and top of the head.

The criminal participants do not reject the crime, but they insist on the fact that they did it without weapon. The story of the Mercedes -500, which took Belanchuk from the market is also quite curious. Before it the car was used by Denis Rybakov and Alexander Pushilin at that scandalous night in casino.

It’s  number plate was P111PP and this particular Mercedes-500 was considered to be carjacked in Rostov region. But it was impossible to inspect the car because Mr.Rybakov was giving different reasons not to show it: the car is far away etc…

After it Mr.Rybakov filed a petition and sent it to the Head  of Main Internal Affairs Directorate claiming on agreement between policemen and journalists ,who ,according to his words, were trying to spoil the reputation of his company.

Oleg Sharikin , the chairman of board of directors of Siberian Cement holding company organized his business according to the rules of the “black” raiding. He used to solve his “business problems” with the help of close relatives of the regional authorities.

The legal footwork was provided by the own company Regionservice.

During 2009-2010 the criminal elements were constantly using threats and beating the businessman from Kuzbass.

The plotters put their securities at his plant and did not allow the former administration to enter the territory, started to control finances.

The Main Internal Affairs Directorate supposed that the 52% share of authorized capital owned by the suffering businessman was officially re-registered on one of the directors of Regionservice law bureau. The Main Internal Affairs Directorate of Kemerovo region launched a criminal investigation according to the part 3 section 163 of the Criminal Codex of the Russian Federation «racketeering».

In 2010 law enforcement agencies of Kemerovo region took their interest in the work of the Regionservice law bureau because of the claims of kuzbass citizens, where they reported that  the solicitors of Regionservice provide the legal services in preparations to the illegal takeover of different companies, defend legal claims made by different companies to government agencies and also to municipalities of cities and regions.

Therewith the solicitors used their relations with law-enforcement agencies, the official position of the persons they worked for and other illegal methods. They also used blackmailing offenses, so called “telephone right”. In addition they might have been involved in drug-dealing.

In 2011 the head of the Bureau of Managing of Municipal Property of Kemerovo (KUMI) Yuri Kima send a letter to the Public Chamber of Kemerovo. In this letter he suggested that they В письме он предложил « should take their mind of legal peculiarities ,connected with legal arguments » and accused  «Regionservice» of «collaboration with business structures of the city in the realization of в uncovered intentions  of illegal privatization of municipal property ».

The law bureau Regionservice  made a claim to the Arbitration court of Kemerovo region with the petition against KUMI for the protection of their business reputation.

The first-instance court agreed that the information concerning Regionservice provided by KUMI was not consistent with reality, was spoiling the business reputation of law bureau and obliged the Bureau of Managing of Municipal Property of Kemerovo to abandon their claim.