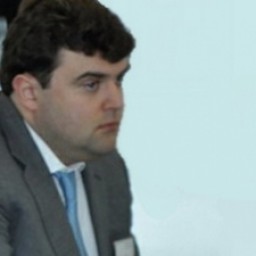 He was born in Vladikavkaz. He held a degree of MSc Finance and Economics gotten in London School of Economics.

He worked as a trade operation director in HSBC Bank in the EMEA region.

He worked as a credit trader for Lehman Brothers.

Before joining Otkritie, he worked as head of Department of sales and trading operations in the region of Central and Eastern Europe, Middle East and Africa (СЕЕМЕА) of the European division of Knight Capital.

On January 17, 2011, he moved from Knight Kapital to the London daughter of Otkritie - Otkritie Securities Ltd (OSL).

In July, he headed the Global Debt Markets Department of FC Otkritie (London).

The reason for promotion was that 70 new buy-side funds appeared in the customer base, and in addition Urumov’s team earned $ 20 million.

On October 5, 2011, by a court decision, Urumov's property was seized.

On January 17, 2011, FC Otkritie reported that a new team on working with debt instruments under Urumov moved to its London division. Other new officers were Alessandro Gherzi, appointed head of international sales, as well as directors of international sales - Alisa Mujagic, Nipun Ramaiya and Jamil Mufti. They all moved to the Otkritie from Knight Capital.

Urumov, acting on real or imaginary behalf of other staff, informed the bank that he and one of his colleagues agreed to receive removal expenses in the amount of $ 5 million for each. In addition, all managers signed the relevant documents, and he undertook to distribute the money in accordance with the agreements.

In fact, the statements were false. In particular, two officers agreed to receive from the bank not a $ 5 million but only $ 500 thousand and $1 million respectively. Three staff members received $ 500 thousand, $ 1 million and $ 750 thousand, respectively. According to the bank information, Urumov “intended to receive and actually received and hold at least $ 17.75 million”. The signatures of the staff put on the documents were falsified.

Founded in 1844, a private bank Bordier & Cie is one of the oldest ones in Switzerland. In 2011, three new Russian customers came here and were accepted hospitably. “Mr. George Urumov has planned to open an account in Bordier bank long ago, but he didn't find any time for this before his arrival to Switzerland”, - a bank manager wrote in the accompanying document when opening the client's account. The private Geneva bank well met also his business partners, Ruslan Pinaev and Sergey Kondratyuk, from London Company Otkritie Securities LTD (OSL), a branch of the financial corporation Opening.

In March 2011, they transferred $ 120 million to the account of the Bordier & Cie. In a few days a part of this amount was spent, and the clients expressed a desire to withdraw the remaining $ 109 million in cash in $ 100 notes. On March 21, the first tranche of $ 60 million was delivered to the cash desk.

Then, the “withdrawn” from the account money of the three Russians was divided into parts of $ 20 million and put into the accounts of front companies of each of them.

Because of all the clients had in the bank $ 109 million in total, two days later, a similar operation was carried out with the remaining $ 49 million, divided equally in parts of $ 16.3 million.

After that, the paths of the three Russians lay apart. On November 21, 2011, the former managing director of OSL Sergey Kondratyuk was arrested at Zurich airport at the request of Geneva prosecutor's office and spent two months in custody in Switzerland on suspicion of fraud and money laundering. A few days later, in London, George Urumov was arrested: he was released on his own recognizance. Meanwhile Ruslan Pinaev searched by Russian and British law enforcement agencies is in hiding from the investigation.

$ 120 million, which had been in Geneva, in reality, were the result of complex fraudulent scheme. The Otkritie Financial Corporation and its London-based Otkritie International Investment Management Otkritie Securities LTD, where the three Russian traders worked, sent the suit in the London court. It requires to recover $ 183 million from George Urumov for misappropriation of bonuses directed to his subordinates, as well as unauthorized transactions with debt obligations of Argentina. Urumov completely denies all the allegations against him. He filed a suit against the former employer for unfair dismissal.

FC Otkritie has accused Urumov of fraud, unauthorized transactions with debt securities of Argentina and violation of labor laws. The corporation filed a lawsuit against Urumov to the London Court and evaluated your claim to the defendant and related offshore companies at more than $ 160 million. For the period of judicial proceedings, Urumov has been suspended from work.

Most part of the $ 120 million, delivered to the account of Arcutes, was transferred to other accounts, but it worked out to freeze $ 12 million in the bank Bordier. Later it became known that Arcutes had transferred $ 36.3 million to the account of Sun Rose Trading (Panama), jointly owned by George Urumov and his wife Julia Balk.

Sergey Kondratyuk behaved more modestly: his firm FO Firmly Oceans Corporation made four transfers in the amount of $ 29.1 million in total to the account of the Jecot Swiss company in Credit Suisse (Zurich), as well as $ 6.3 million - to the account of the same company in the BNP Paribas bank (Geneva). In addition, $ 10 million went to the account of Arcutes Belux Company (Hong Kong), owned by a relative of the manager of Threadneedle Vladimir Gersamiya, through the Bank of China. By the way, from the same Vladimir Gersamiya, according to Alessandro Gherzi, he received $ 2,4 million for an unfulfilled transaction with Threadneedle.

Due to suspicion of fraud, Otkritie attempted to seize the $ 183 million property of George Urumov and to freeze his assets: four houses, including a house with seven bedrooms at 42 Avenue Road, St.John 's Wood, NW8 6HS (bought in April 2011 for £ 19 million), an apartment in London, a house in the town of Begur in Catalonia (Spain), a Maserati car, as well as shares and the money in the accounts. In the course of the case, two other companies controlled by Urumov and his wife Julia Balk - Duhant International (Panama) and Denning Capital Limited (BVI) - were also added to the suit. According to the Otkritie, Balk was the beneficiary of the companies involved in fraud.

Previously Otkritie believed that the transaction was made in the interest of the Bahamian Gemini Investment Fund from the account in Snoras, owned by Vladimir Antonov. Also, it was found that $ 150 million from the sale of warrants were on the account of Gemini in Latvijas Krajbanka (also owned by Antonov and now going bankrupt). The Central Bank of Latvia said they would not comment on the bank's customer. Snoras is also in a state of bankruptcy, and it refused to give comments.

From the account in Latvijas Krajbanka, the funds were transferred literally around the world. A part of the money was transferred to accounts of other companies in Krajbanka. In particular, to the Dominican DIVA Consulting – 20.3 million, Bahamian Taurus Asset Management Fund - $ 2.1 million, Gemini Advisors - 0,3 million, Plazmexon Investments - $ 4 million. In addition, $ 1.2 million got into the account of Bahamian Lion Investment Fund in the Snoras bank. The Otkritie believes that these companies were controlled by persons involved in fraud with warrants.

Also, $ 120 million were transferred from the account of Gemini Investment Fund in Krajbanka to the account of Panamanian Arcutes Holdings in the Swiss bank Bordier et Cie, allegedly as part of the calculation for the sale of 18% stake in Ural Pharma, in the interests of the 36.6 Russian company. The Swiss bank doubted a character of the transaction and reported about it to the authorities; after that there was opened a case on fraud and money laundering. According to the Otkritie, the beneficiaries of Arcutes were George Urumov, Ruslan Pinaev, and Sergei Kondratyuk.

In early 2012, Urumov appealed to the British Tribunal (Employment Tribunals) against his former employer, Otkritie FC, and asked to collect from it up to $ 75 million for his dismissal.

According to Urumov, the dismissal was unlawful and was due to the fact that the top manager had found numerous violations in the company registered in UK.

The very top manager rejects all of the allegations in his address rejects.