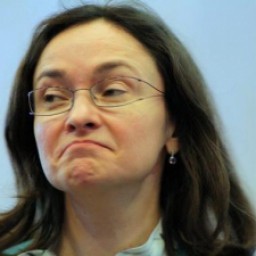 Elvira Nabiullina was born in Ufa on October 29, 1963. She graduated from Lomonosov Moscow State University, where she obtained a degree in economics. She did her postgraduate research and became a PhD in 1990.

1991-1992 senior expert at the directorate of the committee of the board of administration of Research-and-Industrial Union of the USSR for economic reform issue.

1992-1994 senior expert and advisor of the directorate of Russian Union of Industrialists and Entrepreneurs (RUIE) for economic policy issues.

1994 advisor for the Institute of Experts, a think-tank of RUIE.

1994 deputy head of the Department for economic reform. She chaired the state directorate for government control of economy in the Ministry of Economy of the Russian Federation.

1995 deputy head of the Department for economic reform of the Ministry of Economy of Russian Federation.

1996 head of the Department of economic reform of the Ministry of Economy of Russia, member of the collegium of the ministry

1997-1998 deputy minister of economy of the Russian Federation, member of the commissions for economic reform, reform of public utilities, financial accountability reform and interministerial commission of the Russian federation for cooperation with international financial institutions.

1998-1999 deputy chairman of the board of directors of Promtorgbank joint-stock company.

End of 1999 wise-president of Center for Strategic Development Foundation

2003 president of Center for Strategic Development

12 May 2008 She became minister of economic development in Vladimir Putin’s cabinet.

Medal of the Order of Merit for the Fatherland, 2 division (2002)

Medal of the Order of Merit for the Fatherland, 1 division (2006)

Her husband is economist Yaroslav Kuzminov, High School of Economics rector and member of the Public Chamber of Russia. The couple has a son.

On October 31, 2007, a driver of a VAZ car died when his car collided with the ministerial Audi A8 with a flasher of minister of economic development Elvira Nabiullina at the junction of Michurinsky Prospect and Lobachevskogo Street.

Details of the accident remain unknown. According to the files, there are 2 versions of the collision. The first version is based on the diagram of the accident drawn by the inspectors of the road patrol who arrived at the site of the crash. The second version cropped up a month later. It becomes clear from the position of the cars after they collided (as it appears in the first diagram) that it was the Audi driver fault. The second version implies the opposite conclusion. Anyway, despite obvious violation of the criminal law, the proceedings have never been instituted.

The eyewitnesses testified that apart from Aleksandr Kravtsov, Elvira Nabiullina’s driver, there were 2 people in the car - a man and a woman, who drove away from the site of the accident. The ministry does not reply to question about the identity of these people. Minister Nabiullina has not responded to the official request.

Among the governmental officials, minister of economic development and trade Elvira Nabiullina has a reputation of an expert on global economy, Russia’s joining WTO and competitiveness. On the contrary, she lacks skills in management. Nabiullina's good  friend said: «She is unable to motivate people. She has pets and scapegoats among her subordinates. By the time when she left the post of Greff's first deputy in 2003, Elvira had already exhausted both herself and her subordinates».

On the night of June 6, 2009, a hundred and fifty guests led by oligarch Mikhail Prokhorov secretly made their way to museum ship Aurora Cruiser (branch of the Naval Museum) - the ship signaled the October Revolution - and held their a party celebrating birthday of the Russian Pioneer magazine. Among the guests there were governor of St Petersburg Valentina Matvienko and minister of economic development Elvira Nabiullina.

The guests listened to Sergey Shnurov playing his music and singing foul songs from the barge. Tina Kandelaki made funny commentary being the host of the party. A few cheered up guests divided into Neva river.

Following the party, the inspection was held. Official report says: “The permission given by naval officers to organise the event violates both the requirements of Army Regulations and the law about the objects of cultural heritage... In order to avoid violations in future, Chief Military Procuracy has submitted the report to the Navy Commander in Chief. The Commander has ordered to ban any events on board of the navy vessels unless it is a military events. The officers guilty of the violation have been punished disciplinary”.

In 2010 Elvira Nabiullina’s ministry commissioned 31 pieces of furniture for the management of the central apparatus and 14 pieces for ordinary workers to the total sum of 5.4 million roubles ($0.19m). The ministry had the furniture done according to the following requirement. A head’s table has the colour of marble cherry tree and is made of Italian nutwood, inlaid by thin veneer and hand curried leather, Louis XIV marquetry. The  accessories include handle and other decorations made of aged gilded brass. The framework of the armchair is made of massive beech tree, the chair itself - from Nappa-Lux leather. Armrests are made of massive beech, covered by leather plate and canted with golden tacks.