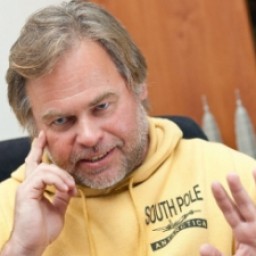 Evgeny Valentinovich Kaspersky was born on 4 October 1965  in Novorossiysk. When a child he got interested in mathematics.  His  mother noticed that and  bought him numerous books on math to develop his talent. In 1982 he finished  Kolmogorov  boarding school specialized in physics and mathematics. The school was  patronized by   Moscow State University. In 1987  he graduated from  KGB Graduate School now known as the faculty of the Institute of Cryptography, Telecommunications and Informatics under the FSB Academy.
In October 1989  after his computer had been spotted with  Cascade 1704  virus he got interested in computer viruses and took up a research.
In 1991 he worked for multidisciplinary research institute under the USSR Ministry of Defence.
In 1991-1997 Kaspersky worked for KAMI scientific and technical centre where he and his associates  developed AVP anti-virus project  now  named as Kaspersky Anti-Virus.
In 1997  Evgeny Kaspersky founded  Kaspersky Lab.
Awards
People's Republic of China Friendship Award (2009)
Friendship Award of Heihe River (2009)
Russian State Award in the field of science and technology  (2009)
Symbol of Science medal (2007)
Kaspersky is one of the world's leading experts in virus and spyware protection. He has published  many articles and reviews on computer virology and regularly speaks at security conferences and seminars in Russia and abroad.

Kaspersky is a member of Computer AntiVirus Researcher's Organization.
Kaspersky has got married for the second time. By his first wife he has two sons. One of them studies at  the faculty of geography  at Moscow State University, while another one is a student of MSU faculty of Computational Mathematics and Cybernetics.

His former wife Natalya Kasperskaya is a co-founder and a shareholder of Kaspersky Lab.
According to  Forbes magazine, in 2011  Kaspersky's wealth was estimated at  800 million dollars.  He was ranked 125th  in the list of 200 Russia's richest businessmen.
Source: Wikipedia

Dossier:
Kaspersky is a senior lieutenant of  the reserve.  He had been a military man for quite a short time. In fact, he did not  even serve in the army. Since he graduated from  the Institute of Cryptography, Telecommunications and Informatics under the KGB  Graduate School he joined an institution under the Ministry of Defence. He chose military service as means to become more disciplined since he suffered from the lack of self-organization  at that time.
Nevertheless, at  Kaspersky's office there hangs a military jacket with lieutenant epaulets as a commemoration  of his service to the Motherland.  He  has not been a top cryptographer but has become  a top programmer.

In 1997  Kaspersky and five members of his team  established  Kaspersky Lab company. By that time they had  become leaders in  development of information security in Russia and joined international market. However, their U.S. partner registered  AVP name as a trademark and claimed to be its owner. As a result, Kaspersky Lab  lost their brand. In November 2000 Kaspersky Lab officially announced the change of the name and the logo of their products for Kaspersky Anti-Virus.

In 2007  Kaspersky,  who formerly was only the head of software protection research, became director-general of  Kaspersky Lab, while his former wife was elected chairman of the board of directors. At that time Kaspersky owned more than 50% of the company, while Natalya Kasperskaya - 30%.   Another 20% ​​were purchased  by four shareholders whose names were not disclosed.

In March 2007  the Federal Tax Service   announced a tender for anti-virus software supply. In May Sistematika  company that offered software of Kaspersky Lab was announced as a winner. At that   Kaspersky Lab  also took part in the tender.

In the end, on  8 June 2008 LETA IT-company won the tender, although earlier the company  was nearly  removed from the competition when FTS  announced that the  product of the company did not comply with tender terms.

Kaspersky Lab  and Sistematika  sought to dispute the decision of the Federal Tax Service.  Kaspersky Lab stated that tender procedure had been violated and  filed a claim for invalidation of the decision to Moscow arbitration court, but lost the case.

On 19 April 2011  in the north-west of Moscow Kaspersky's son Ivan was kidnapped. At first, it was  security department of Kaspersky Lab and FSB officers Kaspersky was personally acquainted with who searched the boy. However, once information on kidnapping  was publicly disclosed,  Natalya and Evgeny Kaspersky applied to the police.

Criminals demanded 3 million euros  for  Ivan Kaspersky's release. Kaspersky learned it from Ivan who was made to call and tell his parents about the terms. The call made it possible to determine the place where Ivan was kept  and to arrange an operation on his release  which was carried out on April 24.

The young man was guarded by  one of the criminals. He was kept in a village of Sergiev-Posad district near Moscow. Soon after the detention of other kidnappers  he also was released and brought  to his parents.

Initially, five people were arrested on the accusation of kidnapping.  Three of them were family: Nikolay  Saveliev, his wife Ludmila and his son Nikolay. Two other criminals, Alexei Ustimchuk and Sergei Gromov, were friends of Savelievs. They were charged under 126 and 163 articles of the Criminal Code for kidnapping and extortion of money.

According to investigators, "version on possible involvement of Eugeny Kaspersky's competitors can be considered as inconsistent". All the detainees are officially unemployed. Two of them were formerly  prosecuted. Gromov was thrice convicted for an assault, while Nikolay Saveliev was held criminally responsible for fraud in the 1970s.