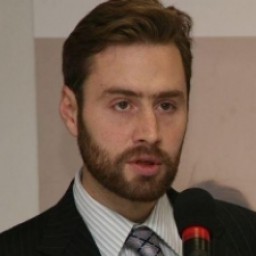 He was born on August 25, 1971 in St. Petersburg. In 1997, he graduated from the Moscow State University of Economics, Statistics and Informatics, Management.

In 1991, he established Aton Company.

In 2009, he elected President of Business Russia.

He was awarded the Order of Sergey Radonezhsky of the 3-d degree (ROC). He is a corresponding member of the International Academy of Social Sciences.

In 1992, in full play of the voucher privatization, a company of students of the Moscow Institute of Economics, Statistics and Informatics (MESI) gathered in a flat of a nine-storey panel house in Lianozovo residential area. They were discussing where to buy vouchers from the public and how to make money on it. A lean student Evgeny Yuriev, recently moved to Moscow from Leningrad, was an instigator of the talks. Not only classmates of Yuriev but also his father was involved in the business. Later the retired captain of the Northern Fleet Leonid Yuriev headed the security service of Aton and remains at that position today.

The Yuriev’s business was standard for the time - the company was engaged in buying vouchers and shares of privatized companies in the regions.

Before the crisis of 1998, Aton received basic income from brokerage operations - purchasing of shares by orders of foreign investors. Aton received the most part of them thanks to Yuriev's acquaintance with Mark Mobius, the head of Templeton Asset Management (they met at a conference in Zurich in 1995). After 1998, Templeton left Russia. And Yuriev switched to Russian clients. By 2005, $ 30 billion a year went through the accounts of Aton group, its assets were $ 600 million, and own capital - $ 230 million.

In the late 1990s, just before the Forgiveness Sunday, Orthodox tycoon Yuriev answered to the question of the media whether he could forgive. He said, “To forgive means to forget, and this is acceptable only in personal life. My wife and son forgive me my crazy life, the lack of attention. Our cat is absolutely forgiving. But there is no forgiveness in business.

Atone declared that the deal on sale of the shares was illegal, and both companies were controlled by Larin. After that, Aton held a meeting of shareholders of Tver-beer CJSC and Athanasius-beer JSC, where new governing bodies were elected and Vyacheslav Karpukhin was appointed CEO of the company. However, all his attempts to get to the plant failed.

In March 2005, the conflict ended. However, according to market participants, the two-year conflict significantly undermined positions of Athanasius-beer in the market.

Evgeny Yuriev said that it had been a usual search, and just during the search the officers of the FSB were asking employees of Aton about presence of explosives and weapons. “This seems to be 'zakazuha’ (the Russian word for an ordered action), and I do not exclude that the search can be connected with the current projects of the company”.

In 2006, the management of Aton was able to sell 100% of the investment banking division of its business - Bank Austria Creditanstalt IB. The deal amounted to $ 250-300 million. The parties refused to give official comments on the matter: the bank referred to a non-disclosure agreement, and Director General of the IG Aton Alexander Kandel declined to confirm the sale of the company.

In 2010, Yuriev was appointed adviser to the Russian president. It is included in the so-called presidential hundred of personnel reserve of Russia.

In 2011, the net profit of Aton was only $ 7 million. The company took only the 27th place in the NRA rating of management companies. The decline is directly related to the gradual departure of a number of key clients.

Actually brokerage segment and analytics have remained the most efficient directions of the company’s business. However, global and domestic trends promise nothing good to the market of securities in the short or long term.

As for the analytical department of Aton, there is an opinion on the market about its employees’ biased comments on various issues. They say it is always possible to receive the “necessary” comment in Aton, if to make a right agreement. Apparently, many people managed to make that.

Some investments could be able to help the company. However, the main owner of Aton has repeatedly declared his unwillingness once again to invest in the company, and not only financially, but also by his personal participation. Yuriev has been engaged in absolutely another business for many years.

In 2012, the French investor AXA Private Equity sold the funds, owning the shares of the companies of Nutrinvestholding, Tsargrad and Solvo Media Group (formerly Marshall Capital Partners) of Konstantin Malofeev, to the Aton group. There the conflict between AXA and Marshall was over - previously the French company accused the partner of violating of the agreements and withdrawal of assets.