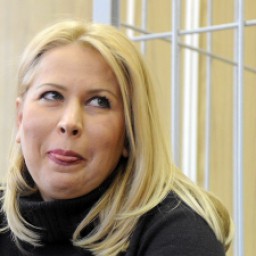 In 2001, she graduated with honors from the Law Faculty of St. Petersburg State University. After graduation, she was engaged in real estate activity and worked as a legal adviser in various commercial organizations.

In 2006, she moved to Moscow and worked in the construction and investment company SHolding.

In 2007, she became an advisor to Vladimir Resin, head of the capital building complex. At the same time she was appointed General Director of the St. Petersburg branch of the Moscow construction company SU-155. Simultaneously she also headed the St. Petersburg JSC Baltikstroy.

From 2009, she was adviser of deputy head of the Presidential Administration Alexander Beglov.

On October 25, 2012, her apartment in Molochny Lane, where Serdyukov was at the time, was searched with regard to the case of Oboronservis. After retiring from the Ministry of Defence of the Russian Federation, Vasilyeva opened a jewelry company Result and a jeweler salon in Moscow.

In early 2012, by a presidential decree, she was awarded the Order of Honor.

Vasilyeva writes poetry. She published a book of love poetry in edition of 500 copies. Under home arrest, she gets fascinated by painting and begins to paints pictures. In April 2014, in the Moscow gallery Expo-88, her personal exhibition “Flowers from bondage” was opened.

Evgenia Vasilyeva is the daughter of a co-owner of CJSC Plastkom and JSC OSS 01 (optic cables) of multimillionaire Nikolay Vasilyev. According to some media, she is a cousin of Prime Minister's wife Svetlana Medvedeva.

Evgenia Vasilyeva didn’t take much interest in family and children as her girlfriends did who dreamed of a home. She never officially married, and she has no children. But even at school, she had already made ​​plans for her bright and successful future. To realize her dream into reality, after leaving high school, Evgenia Nikolaevna entered St. Petersburg State University. It was surprising coincidence that Yulia Zubkova (the daughter of the Deputy Prime Minister of the Russian Federation) and her future husband Anatoly Serdyukov were studying there just at that time.

During the search, the police found in Vasilyeva’s multi-room apartment in Molochny lane more than three million rubles, 120 gold rings, dozens of antique paintings, unique antiques and even a peck of jewels of three million dollars value. The jewelry was stored in five accurate cases made of expensive leather and rare wood. Some pieces of jewelry cost hundreds of thousands of dollars.

Evgenia Vasilyeva’s apartment in Molochny Lane, from where the police seized jewelry masterpieces, paintings, and antiques during the search, is located in one of the most prestigious areas of Moscow, which realtors call “Golden Mile”. The price of the square meter starts here from 25 000 dollars. Taking into account all the parameters, experts estimate Vasilyeva’s 192 square meters apartment at 300 million rubles.

In the Ministry of Defense, the mechanism of assignment of assets was often regulated not by legislative acts, but by personal relations of trust between the minister and his staff. The level of “personal factor” was so high that even officials of legal department (GPU) of the Military Ministry could not resist. Thus, the former head of the department Marina Balakireva testifies that she had to sign off an incomplete package of documents on alienation of property on a plot Peresyp on the Sea of ​​Azov upon an insistent request of the main accused in the case of Oboronservis Evgenia Vasilyeva. As Mrs. Balakireva explains, she was guided by the fact that the former head of the Defense Ministry Anatoly Serdyukov “respected and appreciated Evgenia Vasilyeva’s professionalism very much”.

The ex-head of the Department of Property Relations of the Ministry of Defence Evgenia Vasilyeva, accused of fraud, asked the court to keep her under house arrest in the housing of bigger area, as well as to give her opportunity to see the former minister Anatoly Serdyukov. She motivated her request by her pregnancy. Vasilyeva not only made ​​it clear to the court and the public who was the father of the future child, but also very clearly hinted that she wanted to notify Anatoly Serdyukov about that in person.

The ex-director of the Department of Property Relations of the Ministry of Defense is charged with 12 episodes, on the base of which four criminal prosecutions are brought against her. Vasilyeva is charged under Article 159, 174, 285 and 286 of the Criminal Code (fraud, legalization of criminal funds, excess and abuse of power).  If convicted, she could face up to 12 years in prison.

Most episodes, where Vasilyeva and other defendants of the case of Oboronservis are persons involved, are referred to sale at obviously cut price of real estate or land plots of the Ministry of Defense.

The former Defense Minister Anatoly Serdyukov did not know about the plunders in JSC Oboronservice, but the main accused of the case of plunders in the Ministry of Defense, Evgenia Vasilieva, abused his unlimited confidence, the prosecutor reported disclosing the indictment in Presnensky court of Moscow. “Vasilieva gained Serdyukov’s trust and deceived him organizing the schemes for illegal alienation of property of the Russian Defense Ministry”, he said.