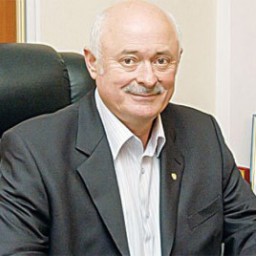 Was born August 23, 1950 in the village Dmanysy of the GSPC; He graduated from the Georgian Polytechnic Institute with a degree in mechanical engineering; He began his career in 1973, having risen from the underground mine assistant of engineer of the site of mine management to the head of FGI "Department of the Order of Honor of North Caucasian roads"; He has the honorary title "Honored Worker of Industry of the Republic of North Ossetia-Alania".

He was awarded the medal "For Service in the Caucasus", " For Excellence in Service ", "For Valour" of I of degree, "Badge of Honor" and badges "Honored Worker of Transport of Russia", "Honorary road builder" of 1st degree "For Service in the Caucasus", gold sign "For service on the roads," I of degree, was elected as a deputy of the Parliament of North Ossetia of the third convocation (2003-2007 gg.).

And we must start, perhaps, with the "head" of the administration, which is almost in the middle of the route - in Pyatigorsk. And some clarification is needed here. April 2, 2002, former director of the North Ossetian Directorate of federal roads Gaioz Makiev became the head of the highway Krasnodar - Baku. It seems, something changed: previously he was responsible for hundreds of kilometers of roads, and after the order of the head of the Federal Road Agency he adopted on the balance sheet totally more than 2 thousand kilometers of "federal highways". Too much, of course, but to figure out with the economy is possible. However Makiev disagreed with a number of "related conditions".

First, the order for his appointment came on 1 April. Had to ask HR of Rosavtodor: "Move the date for a day later or they say, "Well, the first April - do not believe anyone, became chief in the day of laughter."

And secondly, it didn't not suite to Gaioz Konstantinovich at all, the name of the road Krasnodar - Baku. "I'm not responsible for Krasnodar, as for Baku!" And the new leader has returned the former name, given in August 1954 - "Management of the North Caucasus Highway." At the central office facade in Pyatigorsk, on the Kuznechnaya Street, 10, returned to the previous sign in the new version.

Moreover, Makiev found the documents, according to which the road "Caucasus" at the time was awarded the Order "Badge of Honor". And the track, and all the management, according to the new regulations, regained their history and the order at the same time. "Do not deprive us of the past, - said Makiev - To move forward, we must honor and be proud of what our predecessors have done." So in the case of road ancestry in the Caucasus by the diligence of Gaioz Konstantinovich, the page, once carelessly torn, has been restored to its rightful place.

The last session of the republican parliament (North Ossetia - World encyclopedias) before the holidays Alex Machnev started with the important and nice news - Deputies Nelly Acheeva and Gaioz Makiev entered a large international encyclopedia of the best people of Russia, Kazakhstan, Ukraine and Belarus.

News was expounded a blatantly by all media of Ossetia. Why it is not another reason for pride for the native republic? Especially, last time we were so happy for a long time ago - when Vladikavkaz entered the top three cities in Russia. An attempt of Gradus.pro to check the achievement, for which the award was given, then led to accusations of bias, and even distortion and lack of patriotism.

Thus, the "best people" - is an Annual International Encyclopedia, produced since 1999. Commercial project, implemented by Russian publisher "Special-Location", since 2007 together with the editors of the encyclopedia "The Best People of Kazakhstan", "The Best People of Ukraine" and the Belarusian publisher "Special address Europe"; since 2012 an International Institute of Business Development and career is listed as the publisher.

Encyclopedia contains information about the merits and methods of achieving of them by citizens of the participating countries and enterprises. Persons, included in the encyclopedia, get a medal of the participator of the encyclopedia "Best People", which is a public award. The project publishes information about the heroes of the Internet, in electronic and paper versions of the Big International Encyclopedia. It comprises, according to the data of 2011, 10146 articles.

A couple of times, however, the "public advisory council" blundered - our deputies, perhaps, may not even suspect that they were in the company of such an interesting person as Nikolai Kravchenko (aka Kolya Bes - the alleged ringleader of the Novgorod OPG), who was arrested recently in the Kiev region. Another representative of the "best people" - the director of the orphanage Uglich Natalina Tihontseva, which is accused under Articles "Abuse of office" and "negligence", is also under the house arrest.

To find out, by what criteria people are still selected for the "best people" project, the editors of Gradus.pro, posing as helpers of a politician personality, contacted the publishing house. Representatives of the "Special address" believed in the merits of our candidate without any evidence, and by selecting a layout (paper and color photographs), we received a copy of the contract. Now for what some 114,000 rubles, we can not only "put in the book" our virtual deputy, but also get a premium package - two editions of copies, a certificate and a medal.

How do people spend their money - is only their business. Someone buys a car, someone - a beautiful dress, well, someone like the article of themselves. But for some reason the Parliament session does not begin with the words "deputy N. bought a new purse, let us congratulate our colleague together", and you won't hear in news, "Minister X. friends presented a watch, our entire region is happy and proud of him."

Only at the third attempt managed to achieve the exact amount: - "If you divide the amount of money for the long bypass around Nalchik, it turns out that one kilometer costs slightly more than 100 million rubles."

In fact, the 27-kilometer detour was worth 3.5 billion rubles, which is an enormous amount of about 130 million rubles per kilometer in the recalculation. It should be borne in mind that the track was not built from scratch, a significant part of it, including six bridges, interchange and overpass, which accounts the lion's share of spending, was put into operation a few years earlier. "The rise of the prices is sometimes less-explainable" - sized up the situation, also participated in the conference, Deputy Prime Minister Sergei Ivanov.

Makiev also didn't forget about his family. In 2011, his son, Zurab Makiev, decided to be elected to the State Duma. In relevant authorities "Caucasian road master" relative candidacy had a great success, but the residents refused to support it, calling Makiev Jr. a "little known in the country" candidate. Failure did not stop a caring parent - State Duma deputy Maharbek Khadartsev suddenly loses his mandate and vacated seat in the building on Okhotny Row finally goes to Makiev. There is one oddity in this substitution: as it is surprising, but Khadartsev from the deputies of the Russian parliament became only a member of the Assembly of the representatives of the city of Vladikavkaz. I do not want to think that the deputy's mandate has become the subject of commodity-money relations, but we cannot accept that this version explains what happened better than any other.

Ambitious and adventurous policies includes in the fight for the presidency of the republic of North Ossetia-Alania, which is February 29 was temporarily occupied by the regional government chairman Vyacheslav Bitarov. While the acting Head of the Republic on the recommendation of the Russian president proves Ossetians that he meets their expectations, his opponents forms the front, from the trenches of which they are about to start bombing with compromising. According to informed source of the "Criminal Russia," a deputy of the State Duma of the Russian Federation Zurab Makiev, which, apparently, believes that the coveted position may be bought, shows special interest in the "elimination" of Bitarov in view of its prospects.

From sources we learned that Makiev managed to enlist the support of one of the main Russian United Russians, having presented him a gift of a gun made of pure gold. To send a veiled bribe, Makiev and his equally enterprising father, which we will discuss later, played the whole performance. So, Makiev ordered the golden gun in their native Georgia, and were able to negotiate with the head of South Ossetia that precious gift will be awarded to the vice-speaker of the State Duma, the Secretary of the General Council of "United Russia" Sergei Neverov that is what happened. In what format the conditions of the deal were discussed, is unknown, but Neverov was clearly whispered in your ear, saying, say a word for...

His opponent Zurab Makiev - is a 39-year-old native of Georgia, the deputy of the State Duma and the son of a famous Ossetian policy Gaioz Makiev. Exactly Makiev elder helped his son to implement a plan to eliminate Taymazov. ..

Ups of Zurab are increasingly associated with a high lobbying potential of his father Gaioz Makiev, head of the Federal Road Directorate for the North Caucasus, now the head of the Stavropol branch of the FAA "Glavgosexpertiza of Russia." According to the source of "Criminal Russia", the creation of this self-regulatory structure occurred with the direct participation and approval of the head of the "RTS" Alexey Aleshin - a friend of Gaioz Makiev. At the beginning of April 2015 Makiev was appointed as the head of the Stavropol branch of the FAA "Glavgosexpertiza of Russia", which deals with checking of construction documents and engineering survey results, all estimates and financial estimates of future construction pass through him, it gives the conclusion about the prospects of investment and the reasonableness of the budget of one or another property project. Under the jurisdiction of the new agency - is the entire North Caucasus. According to the resource Abos, a new appointment cost Makiev of two million dollars, "given" to the former businessman, now Deputy Prime Minister Alexander Khloponin. The publication notes that you shouldn't be surprised with a scale of bribery - in fact over the years, "the master of the Caucasian roads" Makiev could "earn" several times more. His previous position in PKU "Management of the North Caucasus Road" in 2013, when there still remained Gaioz Konstantinovich, costs $ 13 million, according to Abos.