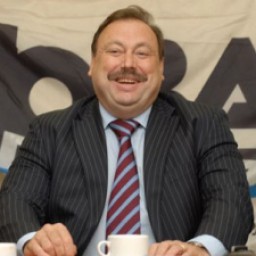 Gennady Gudkov was born on 15 August  1956  in Kolomna, Moscow Region.

He graduated from a teachers' training school as an English language teacher.  Then he graduated from the counterintelligence school and  Andropov institute under the KGB.
Gudkov served in the Army. He also was a department head of the City Committee of  Komsomol.
In 1982-1992 he worked for the KGB.
In 1992 he became president of Oskord security association and vice-president of the Moscow International Fund for Support to UNESCO.
Since 2001 he has been member of the State Duma.
Gudkov was the leader of  People's Party. As a Duma deputy he joined  United Russia faction but in 2007 he quit the party. He joined  Just Russia – Motherland,  People's Patriotic Union faction.

Gudkov is a member of  the State Duma Security Committee. He chaires People's Party of the Russian Federation.
In December 2008 he proposed to authorize  Russian media to advertise beer again despite  the fact that beer advertising was banned formerly.

Gukov is the founder and the owner of Oskord security agency holding  founded in the 1990s. Reports say that in 1996 more than half of three thousand employees were former officers of the intelligence and law enforcement bodies.
In 1997 - 2001   Gudkov was a member of the Advisory Council under the FSB chief. The Council consisted of directors of private security companies.
In 2001 Gudkov resigned as president of Oskord but still remained its owner. Reports say  by that time the company  had taken over leadership on the market of security services.  At the present moment Gudkov is a manager of the company.
Gudkov's wife Maria Petrovna Gudkova chairs the board of directors of Oskord security association, while his eldest son Dmitri Gudkov  is involved in politics as a co-founder of the Youth Public Chamber and the leader of Young Socialists of Russia youth movement supported by Just Russia party.  Gudkov's youngest son Vladimir Gudkov is the director-general of  Central Debt Agency collection agency.

In 1992 Gudkov voluntarily resigned from the  Moscow department of the KGB with the rank of colonel. After his discharge he founded and headed Oskord security company.  By 1996  the firm
had employed about three thousand people, of whom more than half were former officers of the intelligence and law enforcement agencies. In 1997-2001 Gudkov  was a member of the Advisory Council under the FSB chief.

The Council consisted of directors of private security companies. In 2001  he
resigned as president of Oskord company but remained its owner. Reports say that  by that time the company  had occupied the leading position on the market of security services.

Oskord detective and security bureau is Russia's major private security company. Its official owner was Gudkov's wife Maria. As she stated,  the company successfully worked and made good progress. The Gudkovs  even managed to take part in security arrangements for Queen Elizabeth II when she visited   Moscow in 1994.

In 2003  deputy chairman of  People's Party  Gennady Gudkov said that the scandal about Yukos   was "politically motivated"  and the main cause of it  was financing   political parties "not loyal to the Kremlin." Moreover, Gudkov criticized the Kremlin, saying that in Russia  all the people and all the organizations were obliged to support  Kremlin authorities, otherwise they would be prosecuted. "We have a sad expression here:  ''there is always room for frame-up'', he said.

When in 2004 presidential candidate Ivan Rybkin suddenly disappeared   FSB lieutenant colonel Gennady Gudkov, a member of United Russia faction stated that he was competent to say that  Rybkin had gone to Forest expanse suburban boarding house. However, later his words were not confirmed. Rybkin was in Kiev.

On 6 November 2006 Gudkov, party leader of Patriots of Russia Gennady Semigin, member of Revival of Russia party Gennady Seleznev and member of Social Justice Party Alexei Podberyozkin   signed an agreement establishing a joint coordination council. On 13 November chairman of the Social Democratic Party of Russia Vladimir Kishenin joined the agreement. The Council was founded to  join efforts  before regional elections in March 2007. And in the long term  the council was supposed be turned into a center-left party that could compete with Just Russia, a new left-wing party  which was established  through merger of  Life Party,  Motherland and Pensioners' Party. At that time Gudkov announced his position as a moderate social-democratic one. When  interviewed,  he repeatedly stated that he stood for a parliamentary republic where the main figure would be  the prime minister elected by parliament, but not the president. At the same time he criticized  current power system in Russia. In particular, he said that "even   Catherine II did not have that broad powers as president of Russia Vladimir Putin does." Gudkov also called the existing system of government an "absolute monarchy of XVIII century"

Policemen stopped the jeep that crossed a double solid line to get to Bolshoy Kamenny bridge to avoid a traffic jam. The driver opened the window and showed his driving licence card to the policemen. They told him to leave the car  but were cursed and threatened instead. The driver demanded to give him the card back ''right away'' and  ''on good terms''.  All the witnesses and the policemen were surprised to see that the driver  was deputy Gudkov. ''He said that he was in a hurry to get to  the State Duma session  and   had no time to communicate with us'', a captain of the traffic police said.   Gudkov was invited  to the police car for drawing up a report, but he started the car and left there, having shouted on the run  that the policemen ''themselves would bring him the card''.