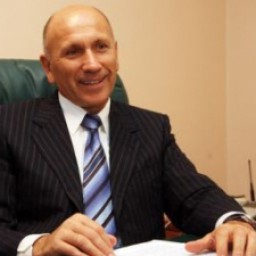 Graduated from Irkutsk polytechnical institute in 1978;

Since 1993 — General Director of OJSC "Raspadskaya";

Issued more than 20 publications on problems of re-structuring of the coal-mining enterprises and the manufacture organization;

Honored employee of Ministry of Fuel and Energy of the Russian Federation;

The deserved miner of the Russian Federation.
Source: dic.academic.ru

Kozovoy got to "Raspadskaya" Kozovoy has got on distribution as the electrician. His colleagues remembered how he often slept in warm substations instead of working. Kozovoy slowly moved up at a career ladder from a post of the chief of a site to the deputy chief of the block of spadework, then became the chief of shaft-sinking and tunneling department. Then perestroika came followed by massive strikes in Kuzbas. Then at the enterprises election of directors was accepted, and on "Raspadskaya" Kozovoy was elected.

"Raspadskaya" was the first of mines at Kuzbas which was reincorporated as joint-stock company and Kozovoy was elected as the chairman of the council of shareholders. He headed mine privatization.

Gennady Poleshchuk, «Red Director», interfered Kozovoy; in 1991-1993 the struggle for power started between them. At first Poleshchuk supported Kozovoy on elections of the chairman of the council of shareholders. But Kozovoy, aspiring to become the director, began to collect the compromising evidence for Poleshchuk. Miners supported Poleshchuk on elections anyway. Kozovoy tried to challenge results of voting in court, but he did not manage to do that, and Poleshchuk was reinstated as director.

But Kozovoy did not let Poleshchuk work, having created intense conditions on mine, and Poleshchuk left. On following elections Kozovoy won already; he became the director, and his partner Alexander Vagin – the chairman of the council of shareholders.

Further Kozovoy decided to buy up shares at personnel of the mine. The conversations with employees were conducted; they were convinced to sell shares at fire-sale price. They were also threatened with dismissal.

After Kozovoy arrived to the mine democracy ended up. Everyone who was against him, either were blackmailed, or dismissed.

When in 2002 Vladimir Putin came to the mine, inconvenient trade union member Yury Stukov was sent to nonexistent conference in Moscow. Employees were given order to answer for the question regarding the salary with figure twice bigger than real.
Source: "Ogonek" from 5/24/2010

In 2001, there was the first major accident on a coal mine "Raspadskaya" which entailed death of four miners. Kozovoy was present on the funeral of victims. Families of victims were paid 10 thousand rubles, injured miners – 6 thousand. Many inhabitants of Kuzbas were revolted by such figures, however it was found out that under the contract the sum of payments equaled to the mid-annual salary of the miner.
Source: «Kommersant» № 57/P (2187) from 4/2/2001

In 2005 one large Moscow company planned to redeem a part of shares at management of "Raspadskaya" to consolidate a controlling stock of "Raspadskaya". However Kozovoy and his partner Alexander Vagin declared that they did not plan to sell the shares.
Source: «Kommersant» № 194 (3278) from 10/14/2005

In 2006, the shareholders elected three independent directors to the board of directors of the company at an extraordinary meeting of shareholders of "Raspadskaya": the Moscow lawyer Ilya Lifshits, the partner of lawyer bureau "Edas", the share participant of auditor firm KPMG Jeffrey Taunsend and the operating director of British mountain company Eurasia Mining plc Christian Shafalitsky. It was made to provide proper level of corporate management and increase of a transparency of activity of the company.
Source: Kommersant (Novosibirsk) № 165 (3496) from 06.09.2006

However, the merge of two coal actives was tightened, and then it was broken at all. Managers of "Raspadskaya" did not want to give out control over "Raspadskaya". Kozovoy was dismissed of the post of the general director of "Yuzhkuzbassugol".
Source: «Kommersant» № 45 (3862) from 3/20/2008

In 2009, Company «Grain of Siberia», belonging to Kozovoy, declared intention to construct in Novosibirsk two dairy farms in "Tolmachevsky" and "Filippovsky" households.

Kozovoy repeatedly invested means to the projects which were not connected with coal. They were investments in hospitality business, manufacture of mineral water, housing construction and insurance group «Sibersky Spas» in Novokuznetsk.
Source: Kommersant (Novosibirsk) № 118 (4173) from 03.07.2009

In May 2010, there was a terrible tragedy on mine "Raspadskaya": as a result of two explosions 66 persons died. The rescuers sent on mine got under the second explosion also. The status of many of victims was not clear for a long time, rescue operations were conducted. Kozovoy declared that restoration of mine would take several years.

The governor of Kemerovo region Aman Tuleyev demanded from heads and proprietors of collieries to check up the mines for safety, and also declared that accident on "Raspadskaya" became tragedy for economy of Russia: the mine made every fifth ton of coal.
Source: Kommersant-Online from 5/11/2010

After failure Vladimir Putin arrived to Kuzbas, met relatives of victims and held meeting regarding rescue works in the mine.
Source: «Kommersant» № 82 (4382) from 5/12/2010

At the meeting Putin reminded that before the failure Rostechnadzor had already applied four times to the court concerning dismissal of the mine’s director Igor Volkov, but decisions of the courts were not executed.

Soon after failure Igor Volkov resigned at own will. Kozovoy was temporarily appointed as acting director.
Source: Kommersant-Online, 5/18/2010

Aman Tuleyev made management of "Raspadskaya" responsible for explosions.

The group of citizens arranged picket on a local site of the railway. 28 protesting persons were detained. Criminal case upon violent acts against policemen was brought.

In his interview to one of TV channels Kozovoy declared that he was interested in finding-out of causes of accident and hoped that the guilty would be punished.
Source: «Kommersant» № 85/P (4385) from 5/17/2010

Right after tragedy criminal case upon part 3 of art.216 of the criminal code of Russian Federation ("Infringement of safety rules at carrying out of the mountain works, entailed death of two or more persons") was brought.
Source: «Kommersant» № 87 (4387) from 19.05.2010

On May 20, 2010 accusation upon failure at the enterprise was brought to Igor Volkov.
Source: Kommersant-Online from 5/20/2010

In Mezhdurechensk inhabitants got prepared for new meeting. At the same time the initiative group of inhabitants led by Elena Pershina agreed about a meeting with a management of "Raspadskaya".

Members of initiative group tried not to admit inhabitants to the meeting. They agreed to take places near to a place of meeting and to dissuade them.

The initiative group appeared suddenly. Elena Pershina gave comments to all mass-media on behalf of the miners. Kozovoy decided to carry on communication with this group. The group took place in a building of «Community liaison office on fight against corruption». According to the person who presented himself as the employee of Security department of certain OAO "Mezhdurechye" with whom Pershina communicated, there were special services behind his organization, and the initiative group was created to avoid such situations as meeting on a local site of the railway. The initiative group was not entrusted by the miners.

However both participants of the first meeting, and initiative group agreed that collisions on the railway were provocation. Several drunk persons were inventively sent to the crowd and they weren't workers of the mine. And after incident Kozovoy told that he did not know with whom to carry on negotiations, and would wait until everyone sober up. Probably, it was him who sent drunk people.
Source: «Kommersant» № 90 (4390) from 5/22/2010

Right after the failures Kozovoy turned to Putin with a written request to compensate a part of the expenses connected with liquidation of consequences of accident. In the White house they answered that compensation was possible, in case it would be found out that the fault for an event was not connected to "Raspadskaya".
Source: "Marker" from 5/20/2010

After the failure "Raspadskaya" refused to pay dividends for 2009, according to Kozovoy, for ethical reasons.
Source: Kommersant-online from 5/26/2010

In June 2010, Communist Party of the Russian Federation tried to hold meetings in support of miners of Mezhdurechensk. The authorities arranged fairs and children's events on the same areas where protest actions were planned to be held. Also all circulation of the newspaper «Soviet Kuzbas» where it was told about failure was detained.

Meanwhile, the initiative group of inhabitants met Kozovoy, and according to some sources, was satisfied with this meeting.
Source: Kommersant (Krasnoyarsk) № 96 (4394) from 6/1/2010