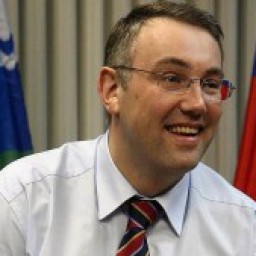 Was born in the village of Usinsk, Komi ASSR, August 27, 1974. In 1978, the parents moved into a rotational village Vangurey in the Nenets Autonomous District, in 1981, the family of Koshin moved to the village of Searchers. In 1991 he graduated from high school with a silver medal. In 1996 he graduated from the Economics Faculty of the Syktyvkar State University, on the specialty "production management". In 2003 he received a second degree at the Law Faculty of the North-West Academy of Public Administration.

Started his career in Syktyvkar as a leading specialist of the "Fund of North Resources" in 1996. From 1998 to 2000 he worked as the director of the Foreign Economic Relations of JSC STC "Ros-Tour" in Syktyvkar. Then, in February 2000 he was an executive director of the nonprofit organization "Union of Geologists and Petroleum of the North" in Naryan-Mar.

In 2006, in the newspaper "Vzglyad" appeared information about the possibility of obtaining a bribe by Igor Koshin for nominating of Alexander Sabadash as a representative in the Federation Council.

However, as it turns out now, the leadership of the "United Russia" bothered an initiative of party members in regional and local elections. According to the head of the press service of the central executive committee of the "United Russia" Tatyana Marchenko, General Council presidium on Thursday expelled the secretary of the political council of the Nenets district department Igor Koshin and the head of the executive committee of this office Grigory Filippov. Koshin excluded for the nomination for governor of the Nenets Autonomous Okrug in spite of the decision of the federal leadership, officially nominated General Director of "Aurora" Alexander Shmakov. Filippov suffered for support of Koshin.

The prosecutor's office of the Nenets Autonomous District brought charges to the chairman of the District Assembly of deputies Igor Koshin, reported Interfax yesterday, citing a source in the prosecutor's office of the NAD. When exactly it happened, it is not specified. Meanwhile, as it was reported to the "NG" in the reception of the Nenets Duma speaker, Igor Koshin, who is accused of threatening to murder and insult, from 16 June is on a business trip and would return only at the end of this week. The receptionist also said that he went from Naryan-Mar, along with a lawyer: "They were going to Arkhangelsk and St. Petersburg - where they are at the moment, we can not say."

August 30, 2006 the Bureau of the Supreme Council of "United Russia" recommended A. Turchak on the post of member of the Board of Federation (SF) from the Parliament of the Nenets Autonomous District - to replace Alexander Sabadash, revoked in May, on the proposal of the Federation Council Speaker Sergei Mironov. The head of the interregional coordination council of "United Russia" in the North-West Andrey Nelidov told "Kommersant" that the "United Russia" is consulting with the Nenets deputies, and the choice of Mr. Turchak explained by the desire of parliamentarians themselves to have as their representative a person, which will help to establish a district contact with Moscow.

However, the speaker of Nenets parliament Igor Koshin, who had to submit for consideration the candidacy of a new senator by the law, stated that he knows nothing about Mr. Turchak and "nothing is going to submit."

Turchak candidacy was agreed with the then head of the district Valery Potapenko, but there was no absolute majority in the district parliament at the "United Russia". Turchak candidacy haven't been submitted. December 14, 2006 the Meeting of deputies of the NAD chose its representative in SF I.V. Koshin (which then was not approved by the Council of the Federation, and the senator from Assembly of deputies of NAD became the oil and gas magnate Farhad Akhmedov).

And such a meeting in this year (!) was already held in St. Petersburg. Coalition with the Lukoil Speaker of the Nenets Parliament odious Igor Koshin - is all more puzzling. There is nothing listed in addition to his high-profile actions in support of Barinov and already mentioned Sabadash during the activity as a legislator.

"According to our information, Koshin I.V. does not mention in the presented information (income statements) for the year 2011 an income from securities and shares in commercial organizations, an asset management of which is on the LLC "Management Company" Promsvyaz" of the city of Moscow, the possible income from commercial activities, which is in favor of Koshin I.V is estimated at several millions of rubles ", - stated in the request for the Director of the NGO "The realization of civil initiatives in the NAD."

The blogosphere has data about other assets of Koshin - and that, foreign! And it is possible that he could afford an "international business" for himself, thanks to the proposed proximity of Koshin with the affiliated entities of the notorious former head of the NAD Alexei Barinov, who was arrested in 2006, convicted and recently released. Exactly with the returning of Barinov to activity, some observers in the NAD link the moving of Koshin to Moscow in the senatorial seat.

In common version, the reason for the resignation was the ex-governor's commitment to their former countrymen. Only one deputy-governor of the NAD - on the Affairs of Indigenous Peoples - was a representative of the Nenets. All other previously worked in the Arkhangelsk region. New temporarily acting governor became the native from NAD, a member of the Federation Council Igor Koshin, which openly conflicted with Fedorov. However, we are now more interesting that there is another version of the change of the governor, associated with the struggle of the two oil companies. For example, according to a local political analyst Andrei Churakov: "Perhaps, Fedorov appeared to be principal in matters of lobbying the interests of business structures that are present in the district, and didn't please with their actions. Koshin - is a controllable figure, which has repeatedly changed his views, interested structures in the district can work with him easier. " At the same time, a co-chairman of the Civil Chamber of Pomorie Nikolay Prokofiev says: "Both of them - and Fedorov, and Koshin - are protégés of certain clan structures. Initially, these two figures were in the stage of confrontation. "

Under the guise of helping the regional press, local authorities are spending huge sums on the publication, which are engaged in the formation of positive image of the government in the eyes of voters. This vicious circle has long been known, but only now it drew the attention of the experts of the All-Russian Popular Front (ANF), who accused the heads of the regions in the unwillingness to fulfill the President's instructions to reduce the cost of self-glorification.

In terms of per capita the most on advertising is spend in the Nenets Autonomous District (Governor Igor Koshin) - about 5.5 thousand rubles per capita in the region with the 43-thousand population. In mass media in the NAD are pledged almost 236 million rubles in total.

However, less than three days had passed, as we reported from St. Petersburg "Koshin married the niece of Valentina Matvienko."

In addition, it was said that the "wedding" was a purely legal nature and that "somebody had something to rewrite on someone urgently."

What's really happening at the strange "Sabadash-Lukoil" creature, which now occupies the place of the governor of the Nenets, we do not know.

The situation with the large-scale sweep of Komi Government, and six months earlier - the arrest of the governor of Sakhalin Khoroshavin in the camp of political scientists associated with the difficult plight of the mining regions, bringing basic revenues to the state budget. The Heads of "neftegazonosnosnye" areas were recommended to be on the lookout, because they soon may be touched by the avenging hand of justice.

However, if you look, the cleaning in the Komi - it is rather the final of the drama than its beginning. Since 2010, all more or less significant "mining" subjects changed their leadership not without filing of Kremlin. It all started with virtually untouchable republics till these days - Bashkortostan and Tatarstan. And if Mintimer Shaimiev left with dignity, without scandal, then in Bashkiria, it wasn't done without demonstration "mask show". Head of the region Murtaza Rakhimov had to be scared with the criminal case against his son Ural Rakhimov.

The change of power in another rich subsoil region - Khanty-Mansi Autonomous District - in the same year, 2010 was also not without "subtle hints" the head Alexander Filipenko, prevailing at the time, who intended to compete with a creature of the Kremlin Natalia Komarova during the next reassignment. A month before the expiration of his term prosecutors filed a case on his closest ally - Nefteyugansk mayor Viktor Tkachev. And then, was declared wanted the Deputy Governor Vladimir Karasev.

In the same period, a replacement took place in the leadership ranks of the Nenets Autonomous District, which is called "northern Kuwait." Igor Fedorov, who led the region at that time, was replaced on his ardent opponent Igor Koshin.

So that at the moment all the major battle "of the bowels" seems to be completed. But another trend should be noted: until 2015 the change of power in the regions preferred to do quietly - making the heads of the regions lucrative offers, or bullying them with a criminal case, but not leading to the extreme.

Last week, the NAD on suspicion of taking million bribes were detained senior officials of the district administration and the Interior Ministry. Experts, interviewed by the "Club of Regions", so far believe that these incidents are "the creativity of individual representatives", but not a reflection of a systematic approach. However, there is a danger of the latter, considering the specificity of the region. In this situation, the governor Igor Koshin, which have so far not been able to unite the elite, not only bears the image losses, but also risks to lose a post, if he will not use the chance to improve their situation, "driving out of everything".

And if he cannot cope with this, I fully admit that the new governor may appear. Especially that the Nenets district is unstable in this respect, managers are frequently changing here. So I would not be surprised if in 2016 Koshin will also be replaced "- stated Morozov.

However, Morozov believes that the corruption for the NAD - is "a completely natural thing." The political scientist said: "It is difficult to control the finances there. A lot of officials, but a district is small in terms of population. In fact, there is nothing there except of oil, the reindeer herders are almost gone from there. Therefore, this district is only interesting to the people of the oil plan, which would like to have a representative there. "