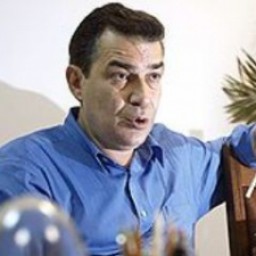 In 1977 he graduated from Moscow Aviation Institute, having majored in aircraft engine construction.

In 1981-1989 he worked at the Cinema and Photography Research Institute and was engaged in scientific work.

In 1990  he founded Rink  company that produced iridology devices.

.In 1995 he became the sole owner of  SIA International.

In 2008 he reduced its stake in  SIA International company  to 50% .
He has more than 60 published works and inventions on film equipment.

Rudinsky is married to Yelena Rudinskaya.  He has two adult daughters. One of his daughters has worked  for  SIA International  for some time, first as an assistant manager and then as a manager.

In 2011 Rudinsky's wealth  was estimated at 900 million dollars.

For a long time Rudinsky's partner and co-owner of  SIA International  had been Shabtai Kalmanovich, known for his criminal connections. Kalmanovich  was acquainted with  Vyacheslav  Ivankov also known as Little Japanese and partnered with member of a New York crime family Marat Balagula. In 1996   Kalmanovich was mentioned in  FBI reports as "a powerful member of  Solntsevskaya crime group." Besides, he was a friend of famous singer Iosif Kobzon well- known for his criminal connections. In November 1997 Liat Pharmaceutic  company   jointly owned by Kobzon and Kalmanovich  was sold to SIA International.  In 1998, when  interviewed by  Pharmaceutical Bulletin, Igor Rudinsky said that Liat Natalie  and  SIA International would be merged under the name of the latter. " The merger will be formalized in1999",   he said. Since then Rudinsky had been considered as the owner of  SIA International. However, in 2003 Rudinsky said that the company abandoned the merger. Nevertheless, SIA International owned most of the assets of Liat Natalie, while former employees of Liat  Natalie indicated in their CVs that after the merger  they worked for SIA International. It is known that in the late 1990s  Kalmanovich quarreled with Kobzon, perhaps just because of their disagreement on pharmacy business. Since the merger Kalmanovich himself had not almost cared of the company.

On 2 November  2009  Kalmanovich was shot down in the centre of Moscow. Investigation of the case was suspended.

On 8 April  2008 it was announced that  TPG Capital  investment  company, the USA, was going to purchase  50% of shares of  SIA International. However, later   TPG Capital   company refused to buy the stake and paid a $ 50 million fine to Igor Rudinsky.

In 2010 Rudinsky  purchased a 25% stake in   36.6 Network of Pharmacies and joined the board of directors of the corporation.

However, in October 2011  he was not nominated for election to the board  which took place in June 2011.