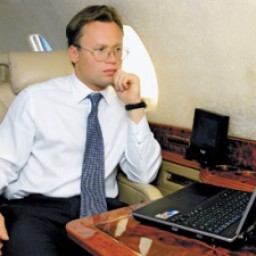 Biography
Kirill Minovalov was born on April 22, 1971 in Moscow. He graduated from the Moscow Institute of Railway Transport (MIIT), specializing in Systems Engineering, and the Institute of Highest Administrative Management of the Academy of National Economy under the Government of the Russian Federation (course of banking).

In 1994 - founded and headed the Avangard Bank

In 2000, a member of the Krasnoyarsk regional branch of the party Yabloko Victor Gitin accused the regional government of deliberate sending of all the control threads over the Krasnoyarsk Non-Ferrous Metals and Gold to the Moscow Bank Avangard, considered one of the financial sources of the power of the Governor-General Alexander Lebed.

The Krasnoyarsk political analyst Vyacheslav Novikov told about the mysterious Avangard that the owners of the bank were registered and works in the State of Delaware (USA). Thus, it turns out that the strategic plant, which formally is in absolute regional property, in fact is directly subordinate not to friends of the Russian Federation.

According to Gittin, at the plant (and at once after the mysterious death of its permanent director Vladimir Gulidov, always avoiding politics, in a car crash near Novosibirsk on April 17, last year), large shortage of platinum was detected. The company had misappropriated the amount in circumvention of government agreements. Under cover of different sponsorship programs, the money from the sale of non-ferrous metals went into the accounts of a certain Lebed social youth movement and Lebed charity fund, established under the aegis of Lebed. The police investigation, initiated on the application of Gichin, as they say, “under vigilant surveillance” of the regional administration, was played down. Its results haven’t been known to general public until now, although the fact that the plant had sponsored some of the initiatives of the Lebed social youth movement was officially confirmed by Svyatoslav Petrushko, the Economic Deputy of Governor Lebed.

In 2000, Minovalov became economic adviser of Gennady Seleznev. Unofficial explanation of that friendship are clear - a Deputy's mandate costs a million dollars at the average, and the businessman received immense opportunities to promote his businesses in addition to the communist “cover”.

Minovalov flies to Croatia on Saturdays. There he has his own shipyard, where his 50-meter ocean yacht with a platform and a hangar for the helicopter with a value of € 24 million is being built. This unfinished yacht is already a favorite toy of the businessman.

Minovalov handles his Cessna by himself. His business interests include malt and glass business. The businessman often carries on negotiations with partners in Europe: he flies there from Moscow in an hour (taking into account time zones). During a day, he holds a number of meetings in different cities or even countries of the EU, and in the evening he comes back to Russia.

In 2010, the director of banking regulation and supervision of the Central Bank Alexey Simanovsky declared his intention to clean up the bank flock from 200 black sheep, financing business of their owner. Speaking about the “sheep that exude the risk of mar of the whole flock”, he referred to the banks with the greatest concentration of risks on one borrower and clients associated with the owners of the credit institution. The Avangard was one of the first in the list of such banks. The share of credits of the bank's portfolio to the “insiders” was 22.8%, the share of credits of the capital to the “insiders”- 86.8%.

Activists of Blue buckets movement claimed that they identified the banker, who had followed in the cortege which knocked down and killed four workers in Domodedovo near Moscow. According to them, the owner of the Avangard bank Cyril Minovalov was a passenger in the car.

Moreover, the state media knew about that the day earlier, but they were forbidden to disclose this information.

The press service of the Avangard officially stated that the bank didn’t own cars with number signs of M 552 MP 77 and MP 77 to 424, and there was no one of the bank management in the vehicles at the time of the accident. However, the bank acknowledged that the cars were used to transport top-managers of the Avangard holding company, including President of the bank Kiril Minovalov. However, at the time the accident, there was no one of top-managers of the bank holding company in the cars; there were only drivers, who were employees of the bank and were returning to Moscow at the end of the day.

In 2012, Elena Pakseeva applied to the Rostov-on-Don police with a complaint against the daily threats of an employee of the security service of the Avangard bank. Piskareva’s debt amounted to less than 1000 rubles. However the caller refused to give his name, but said that she was a deliberate non-payer, and that the bank terminated the contract with her. The request to provide the documents confirming the cancellation of the contract and the card statement wasn’t satisfied. And the next day the threats showered. “We are not going to stand on ceremony”, the man promised. “I do not want you to get to court; I want to make a decision on you in a different way. What are you mumbling? If you're a cow, I'll milk you”.

In 2012, the Avangard Bank was in the epicenter of the next financial scandal. It occurred just after the police arrested members of a criminal group in Moscow, who used a unique way of stealing money from the bank accounts of citizens. It was established that this gang consisted of 8 people. The gang members were engaged in massive spread of specialized “banking” Trojan of Carberp type and RDP-door, through which they had full access to the personal computers of many institutions using the “Bank-Client” system.

Then the scammers withdrew money from accounts of citizens. Moreover, the “fishers” (the title of this type of scam) withdrew the stolen money from the accounts of people to the Avangard bank accounts controlled by them. As a result, legal entities of almost all regions of Russia suffered, and the bank swindlers were able to earn about 60 million rubles.

At the moment, some questions still remain. Why had not the Avangard bank managers turned their attention to a fraudulent withdrawal of 60 million rubles through their bank? Why was the reaction of the bank only after the gang “fishers” had been arrested? Why fraudsters used services of the Avangard bank in particular? An irrefragable answer to these questions is only a version that the fraudsters had an accomplice in the management of the Avangard.
Source: The Moscow Post, April 2, 2012