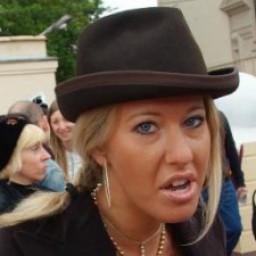 Ksenia Sobchak was born on 5 November, 1981 in Leningrad. She is a daughter of Anatoly Sobchak, the first mayor of St. Petersburg, and  Lyudmila Narusova, a member of the Federation Council. In 1998 Ksenia entered the Faculty of International Relations of St. Petersburg State University. In 2001 she moved to Moscow and transferred  to Moscow State Institute of International Relations. In 2002 Sobchak received bachelor's degree and entered the graduate faculty of political science of MSIIR. She acquired professions of  specialist in international relations and political scientist.

In 2004 Ksenia Sobchak was one of the presenters of  Dom-2 reality show  on TNT  TV channel.
In 2008 and 2010 she hosted Muz-TV Award ceremony along with famous showman Ivan Urgant. She acted in the TV commercials of Euroset mobile phone chain store.

On 15 March, 2010 she hosted Freedom of Thought talk show on Pyaty channel.

On 23 April, 2010 she was a presenter of Girls entertainment program on Russia TV channel.
In 2011 Ksenia hosted Top Model in the Russian way show.

Ksenia also hosted reality shows like Who does not want to be a Millionaire on TNT,  Survivor-6 on Pervy channel, Chocolate Blond on Muz-TV. She was one of the presenters of Star duo show  on Pervy channel. She hosted her author broadcast  - Barabaka's weekdays -  on Serebryany dozhd  radio station.

Sobchak positioned herself as a journalist while being a columnist of GQ magazine.
Sobchak is not married. When interviewed, she confessed: "Family and children - it is not what I'm interested in ... It does not evoke sentimental feelings, I do not like small children, I do not want to have a 'classical' family. These are not my values. I believe that capitalism is the best contraceptive. If one has a normal life, work, education, money and wide range of opportunities, one is absolutely indisposed  to waste the life on diapers, cooking  and other sorts of fun "

Dossier:
Since her childhood Ksenia Sobchak was acquainted with Vladimir Putin, who under Anatoly Sobchak was an adviser on international relations to the chairman of  Leningrad City Council and chairman of the Mayor's Office and also was the first deputy chairman of St. Petersburg administration. Ksenia prefers not to talk about their acquaintance.

Sobchak's media projects, starting from  notorious  Dom-2 reality show on love and relationships, suffered social ostracism. She was criticized for "exploiting  mean human foibles", while using her parents' name and connections, and  for ''self-advertising and satisfying of unabated vanity" on the air.

Moscow Duma deputies called Dom-2, the reality show on love and relationships, immoral and blamed Sobchak for pandering and pimping.

In 2009 Olga Rodionova, the wife of tycoon Sergei Rodionov, was outraged because of utterly rude remarks Sobchak made during award ceremony of Silver Boot, the prize for dubious advance in different walks of life. Sobchak declared Rodionova to be a winner of the "Naked and funny" nomination due to Rodionova's album of pictures titled The Book of Olga, where she posed naked. Sobchak was charged to pay Rodionova 20 000 rubles compensation for moral losses by a court decision.

On February 2010 it became known that Sobchak had purchased 0.1 % of Euroset shares from owner of the company Alexander Mamut. It cost her one million dollar. Sobchak said she had "wanted to make certain  investments." On June of that year Sobchak invested 17 million rubles in the construction of Bublik cafe on Tverskoy Boulevard in Moscow. She owned more than 33 % of the project share, as well as other two investors – co-owners of Ginza Project company Dmitry Sergeyev and Vadim Lapin.

On 9 December, 2010 eminent public figure and leader of Anti-Sobchak movement Mikhail Shusharin was found dead at one of the abandoned houses of Salekhard city. An axe was stuck in his back. Shusharin was not so close to political circles to blame politicians for the contract killing. Shusharin did not avoid foul means for self-display, though. Thus, on 23  September, 2009 in Let Them Talk TV-programme broadcast all over the country, Shusharin said that Ksenia Sobchak was pregnant from him. Later he took his residence in a box, as he carried out protest action in the streets of Sergiev-Posad, a town near Moscow. He demanded to remove  Ksenia from TV in this way.

Sobchak refused to give any comments on Shusharin's death. She said she had been totally indifferent to the activities of Mikhail Shusharin and had not been interested in hiring a killer because Shusharin had never been a danger to her career.

On September 2011  eccentric  actor and former clergyman Ivan Okhlobystin announced he would run for presidency. Noted socialite Ksenia Sobchak immediately offered Okhlobystin her help in governing the country and thrust herself on prime-minister position.